Literally, a couple of days ago, I shared with you about an organization called FSG and was able to tie it, not only to Common Core, but to the Gates Foundation. Before we fire up the “Fib-o-Meter” for its weekly measurement of “Total Truth”, “Neutral”, or “Total Fallacy”, I wanted to introduce to you a group that’s a result of the combined efforts of FSG and the Aspen Institute (a huge proponent for CCSS). It’s called the “Collective Impact Forum”. In the screen shot below, note the tone of voice the opening paragraph gives.

First Up, the Funding:

If you log on to the CIF’s website, you’ll see alot about togetherness, community, and collective good. Then, on the right hand side of the screen, you’ll see a set of 3 boxes. One is about the funding. So, I clicked there. Seems CIF isn’t as ‘community oriented’ as they want us to believe. Why? You have to be a registered ‘funder’ to see whom else funds the Forum! For not being very neighbor-like in a community for collectiveness, “Total Fallacy” for denying access to those who respect transparency in our organizations. Oh, those other 2 tabs, one is labeled ‘Backbone Community’ (but you have to be a registered ‘backbone’ to view the rest of the others with backs). “Total Fallacy” for again, denying transparency to the general public.

The last one is labeled simply “Community”. That one I could access without being registered. Alas, this too is packed with general access. If you scroll down and see the pdf file they have to highlight their efforts in OUR communities, you have to be a registered member to have the document. I don’t think I like these neighbors very much, so far.
*NOTE: After digging around and being denied entry into several portions of this online community, I was able to find out the funding foundations. Fib-o-Meter’s rating this group as one big blob. For their collective efforts in funding our collective demise: “Total Fallacy”!

If you’re thinking there’s not much the Fib-o_Meter can measure today, just remember, we’ve not gotten very far. However, I did find this that from the perspective of the CIF, they feel is a “Total Truth”.

Those of us fighting CC, should consider it a chilling reminder why we fight so hard for our individual students. Visit, http://collectiveimpactforum.org/what-collective-impact, and as you scroll down, you’ll understand how the Fib-o-Meter measured this “Total Truth”.

I can share with you by snooping around the website a bit more the CIF considers the 2011 Standford Social Innovation Review’s article about collectiveness to be a foundation for what CIF does. The description CIF gives of the article shares it’s about large scale change with a common agenda for all. Here’s an excerpt you need to see concerning education. “The scale and complexity of the U.S. public education system has thwarted attempted reforms for decades. Major funders, such as the Annenberg Foundation, Ford Foundation, and Pew Charitable Trusts have abandoned many of their efforts in frustration after acknowledging their lack of progress. Once the global leader—after World War II the United States had the highest high school graduation rate in the world—the country now ranks 18th among the top 24 industrialized nations, with more than 1 million secondary school students dropping out every year. The heroic efforts of countless teachers, administrators, and nonprofits, together with billions of dollars in charitable contributions, may have led to important improvements in individual schools and classrooms, yet system-wide progress has seemed virtually unobtainable.” Did you notice the “Total Truth” about those major funders? All 3 have been identified as pro-CCSS supporters. To see the rest of that 2011 article (where the Strive Together program is touted as successful; I’ve also written about Strive’s ties to CCSS), visit: http://www.ssireview.org/articles/entry/collective_impact

In finding a page where you could actually find something other than ‘you must be a registered ____________.’, Look at the ‘neighbors’ committed to helping us all become more collective. (click to enlarge the picture)

For each of the above groups you can conduct your own look into them as far as their ties to CCSS or this collectiveness. Just by the sheer fact they are named in a joint project by two OTHER pro CCSS groups, might be proof enough for you. As an example of what you can find, look at what  Fib-o-Meter did find out about United Way Worldwide (one of the organizations above). UWW  is committed to global education and has corporate ties with other supportive CCSS groups such as Ford Motor Company, Exxon, WalMart, AT and T, and more. (see: http://worldwide.unitedway.org/pages/corporate-partners )

For this, Fib-o-Meter, rates UWW’s activity in this as “Total Truth”. For more “Total Truth” about the US United Way’s design on aligned education, see their “Birth to 21 Continuum”. You can access the timeline AS well as see what else they are doing in US education, http://www.unitedway.org/our-work/education/ 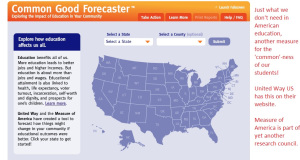 Finally, Another Partner in the CIF You Should Know About:

Before the Fib-o-Meter shuts down for another week, let’s see how it rates this last group we’ll look at today. Called “The Integration Initiative”.

Why is this one so special? Let’s find out. Here’s the reason Fib-o-Meter finds it ‘special’, see below and click to enlarge it.

Those most powerful institutions behind this Initiative? Straight from the TII’s website:

Did you notice any group listed above as ones you already know as CCSS friendly, supportive, or profiting from? Fib-o-Meter did! More “Total Truths” from the TII about ‘cradle to career’, ‘data mining useage’ and more can be found at:

Notice the amount of P3 (Public Private Partnerships) involvement in our education system. Certainly not a great thing at all! If you consider that P3s are how we were saddled with CCSS in the first place, you know what a “Total Fallacy” this concept is!!

Each week, since I’ve begun my blog, we’ve looked at the fibs the CCSS Machine would like us to believe and exposed them. We’ve searched out and found the truth the Machine has wished to remain buried and brought them to the surface. I hope you’ve been able to see from this article and the one just 2 days ago that the collective mindset is ruining our education. It’s eroding our society. It’s simply a bad fit for America.