Oh, my fellow Anti Fed Ed Warriors, have you noticed the rapidity of DC announcements since COVID-19 hit the nation? It’s enough to make your head spin or your eyes to bulge. 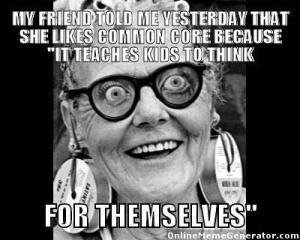 So, what’s Sec. DeVos done now? Wasn’t it just a few days ago (March 24th) DeVos had all kinds of COVID-19 educratic news? Yes, but somehow her new ‘news’ expands the federal jurisdiction.

CTE (Career Tech Education) State Plans get a flexibility ‘waiver’ of sorts. How? State Plans submitted to the federal government for approval (gee, local control’s ‘just fine’) were due 4/15/2020. These State Plans are to fulfill at least one of the mandates in the Strengthening CTE in the 21st Century Act signed into ‘law’ by President Trump.
(*Note: if you missed my two articles about this, go here and here.)

Warriors, CTE and its connection to STEM (Science, Technology, Engineering, and, Math) are key to combining the UN’s (United Nations) SDGs (Sustainable Development Goals) together. How? Goals #4 and #8 are (respectively) quality education for all and descent work for all.

If you read the Press Release from the U.S. Dept. of Education, you’ll see that DeVos is supposedly offering help to the 12 million students (all ages and eduucational backgrounds) during the health crisis. Notice, though the actual help isn’t laid out, you have to go to another link to find out the details. Also note that DeVos targeted those in the health care CTE sectors. 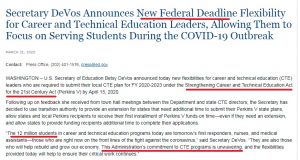 So, what are some of the details for the flexibility? DeVos is offering a ‘waiver’ in time. That’s it. It’s almost like a ‘mother may I?’ scheme. If you can make the April 15th deadline, go ahead, if you can’t; try the June 2020 one. If that doesn’t work, there’s one in September 2020. Warriors, keep in mind this all centers on funding for CTE well beyond 2020. Speaking of funding CTE, be sure to look at the exceptions for receiving funds even without some of the procedures completely satisfied. Why is that? As per the Press Release, ‘this Administration is unwaivering in its commitment to CTE.’

In other words, my followers, the CCSS Machine cradle to grave grab for workforce geared education is SO entrenched, it can’t be stopped, therefore it MUST be funded! This, too, falls right into the UN’s ‘future of work’ (see the SDG image above)

In the image below, I’ve highlighted how much the current Administration has supported (and continues) CTE, Common Core, STEM, and more. You can open in a new window or download and enlarge it. Remember, it’s all based on documented evidence, not opinion.

Warriors, if you read the entire Press Release, you’ll see the phrase ‘lifelong learning’. That’s OCED and UN language.
(OECD is the Organization for Economic Co-operation and Development). OECD uses that phrase in conjunction with their other infamous and dehumanizing ‘human capital’ wording. Human Capital is based on your worth and return of investment in a job capacity, not an academically prepared free thinking person!
You’ll also see that credentialing (aka: bitcoin tracking) is included, that distance learning needs to replace ‘seat time’,  and, that students are the center of the education equasion, not the teacher. Trust me, there’s even more, my friends.

To close out the Press Release, and, almost as an afterthought, it’s stated that We the People can post public comments. Released April 2nd, 2020 on the Federal Registry, we have 32 days to air our objections, support, concerns, etc. about DeVos’s proposed rules.
All comments must be submitted before midnight, May 4, 2020. (Comments end at 11:59pm)
Some of the huge issues against the rules going forth are:
a) Locks in CBE (Competency Based Education) that aligns to Common Core, College/Career Readiness, STEM, and all connecting avenues.
b) Uses ‘innovation’ as a detractor for the massive student data mining needed to create digital dossiers which track students from cradle to grave.
c) Uses a false narrative of taxpayer savings and fast-tracked degrees at lower costs. (*Note: these are designed to sway taxpayers into supporting moves like this. Appeal to the pocketbooks of America. Howver, with the massive COVID-19 associated student debt forgiveness mandates, it is EXACTLY American taxpayers who will foot those debts.)
d) Places more federal rule over States’ rules. States, once again, will have to submit even more to D.C..
e) Will allow for more globally accepted education by having international students compete for Americans spots in education.
f) Cites 3 previous Executive Orders (which are questionable as to constitutionally due to the fact, Congress and We the People are bypassed) for regulatory process making and costs. EO 12866 (Clinton), 13563 (Obama), and 13771 (Trump). The purpose, to suggest the government is saving time, red tape, and, your taxes.
g) Cites changes to the HEA (Higher Education Act). **Warning, the HEA is currently being updated to complete the final ‘nail in education’s coffin’. Head ‘cheerleader for this is Sen. Lamar Alexander, who cheered ESSA (Every Student Succeeds Act) on. He will retire at the end of the 116th Congressional session.
So, expect that whatever changes D.C. makes to the HEA, as ‘law’ or the rules by which States are to submit, too. These will all intersect.

The final version of new higher education rules will be posted Nov. 2020. Right before the Elections. Not long after early voting has taken place. (*Note: this assumes our election cyle will not be tampered with due to COVID-19.)

Warriors, I have made my opposing comments, as of the evening of April 2, 2020. There are close to 840 comments already, including mine. From the first few I read, only 1 or 2 were opposed. Most comments were by groups which stand to gain off these new rules. If you wish to see my comments, look for entry 1K4-9fwn-u5nr.

So, why bring this up now, Lynne? There are a few reasons.
We have until May 4th, 2020 to make as much of a dent in the CCSS Machine’s plans for this as possible!
a) The sheer pompousness of DeVos and the unconstitutional AND breaking of federal law aspect of all this. See item C, below.
b) We need to be ahead of the candidates, when it comes to educational overreaches, not behind. If we truly want local control, we’ll need to wrest it out of the Swamp’s hands.
c)  It is our duty to demand our government cease its continued unconstitutional anti-citizen trek toward every ism EXCEPT patriotism. To sat our government is draconian, is pretty close to the truth.
d) We cannot, I repeat, cannot allow our election processes to be denied or changed, not only is that a direct violation of the U.S. Constitution, but it’s a federal civil rights crime.

If any of these overreaches by our government, in education, in our lives, or anywhere in between bother you, let’s do something about it! Check out the Civil Liberties Petition at Citizens for Free Speech. It’s not about the virus, but the unconstitutional usurpation we are seeing like never before, of our liberties and rights.