Anti CCSS/Fed Ed Warriors, the last article I shared with you stated that I would be delving into the recently released U.S. Dept. of Ed State Accountability Goals even further. That is a project that is keeping me busy.

However, in the meantime, I want to share some evidence that is helping make sense out of the steps being taken right under our noses to implement ESSA (Every Student Succeeds Act). If you have been a long time follower of my blog, you know that this seemingly innocent statement is, in fact, a loaded message. How so?  For the ESSA to be FULLY implemented as it was written (a fist-pounding declaration by Sen. Lamar Alexander upon ESSA’s passage and Dr. John King’s confirmation), current or old laws must be changed or new laws written; entire communities must have wrap around services in place; and those accountability measures MUST be adhered to.

While the CCSS Machine is quickly spewing out the charts, graphs, summaries, reports, webinars, social media pieces enticing us with all the ‘local control’, we MUST remember one fact about ESSA that is being either glossed over or not included:

The Dept. of Education’s Secretary MUST approve each and every State Academic Plan BEFORE the States can begin using them.

So, the questions to date I have (and I am sure you may have them as well):
1) How can the Feds claim States have local say in their plans when the Proposed Rules for State Goals are over 190 pages?
2) How can the States have local plans when there is evidence of CCSS Machine produced State Decision Making Guides? ( I shared with you how I found evidence of this here in NC. See: https://www.commoncorediva.com/2016/05/14/up-and-coming/ )

If you don’t have time to read the Up and Coming article, here is a screen shot to prove I have CCSS Machine evidence to coach the States: 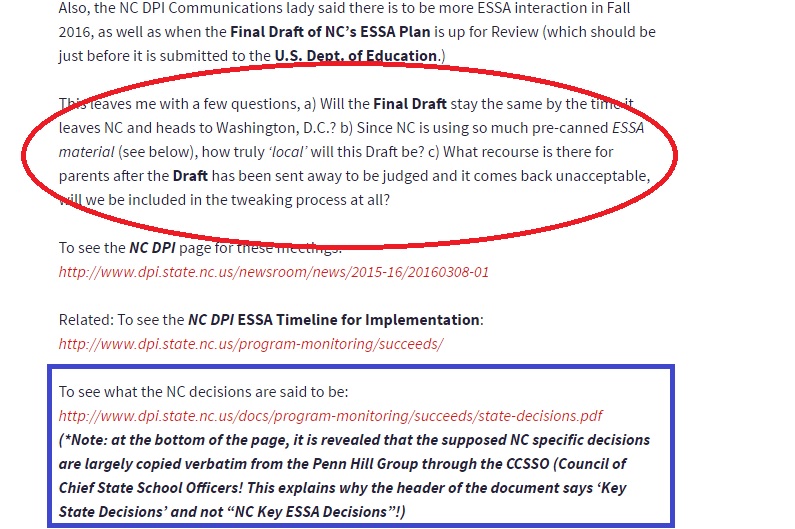 Part One:
As far as the ‘Accountability’ factor for States? See the screen shot below:

The chart you see above is from the U.S. Dept. of Education and is included in their recent press release to try to ‘snow’ us on how great ESSA for the States is.

As an added resource, use my School Board Special Series, where you get specific page numbers for every educational choice; community entanglement; P3 (Public Private Partnership) overreach; Data mining enhancement; and more!
Part One: https://www.commoncorediva.com/2016/01/23/the-school-board-special-part-one/ (shows the Total Community alignment portions of ESSA)
Part Two: https://www.commoncorediva.com/2016/01/25/school-board-special-part-two/ (has the ESSA ‘Orderly Transitioning’ Clause)
Part Three: https://www.commoncorediva.com/2016/01/26/school-board-special-part-three/ (points you to page 85 of ESSA’s Final Conference Report where states MUST measure and report ALL students for post-secondary readiness)
Part Four is not being shared at this time, as it has more to do with the Parts 1-3 feedback and the ESSA timeline. Right now, we need to stay focused on the ESSA and how these Accountability Rules are in need of our attention.

Below is the second screen shot of the Accountability Chart from the U.S. Dept. of Ed. It deals with entire schools being graded for success or failure. Note that the Chart is quick to give the illusion of how the shift from NCLB (No Child Left Behind) and ESSA will be for schools, but research has proven, there is not only all the measures of NCLB included in ESSA’s wording for schools, but added punitive moves have been laid out, too!

How do I know this about NCLB and ESSA? Here is an excerpt from a Feb. 2016 article I wrote about the 2017 Fed Ed Budget, “The article begins with a pretty big erroneous statement about how the ESSA passage will continue the ESEA (Elementary and Secondary Education Act of 1965) and its civil rights legacy. I guess the U.S. Dept. of Ed totally overlooking the NCLB (No Child Left Behind)as a continuation of the ESEA, is no big deal. Without NCLB, there would not of been theRttT (Race to the Top) which saddled all of us with CCSS in one form or another!”
If you would like to see the rest of the article:
https://www.commoncorediva.com/2016/02/12/fed-ed-budget-for-teachersleaders/
(*Note: if you scroll to the bottom of the page and look on the left hand side, you will see the back arrow for Fed Ed Budget article #2, that will also link you to Fed Ed Budget #1. All of the articles cover ESSA and the funding the feds will use against us to implement it.)

To see how the States are being graded for College/Career Readiness (CCR) already:
https://www.commoncorediva.com/2016/03/17/states-get-graded-ccr-style/

Also, refer back to those 3 School Board Specials so you can make even more connections between school measurements and ESSA. Do not forget the Digital conversion aspect of schools being held as great performers or not. If you are not aware of it, ESSA has massive data mining/digital technology passages. See my articles on State ESSA and Digital Overload.
For Digital Overload: https://www.commoncorediva.com/2016/02/04/essa-and-digital-overload/

For State Alignment to digital overload per ESSA:
https://www.commoncorediva.com/2016/02/08/state-digital-education/

For the U.S. Dept. of Ed’s upcoming nationwide internet access survey (so that every student across the nation has 24/7 internet access to ALL educational resources) which means an in home assessment for all, as well as the massive infrastructure costs to get all of American hooked up to the internet. This also will be used to factor in how effective our schools and teachers are:
https://www.commoncorediva.com/2016/02/05/weekend-news-the-ies-and-the-essa/

As far as ESSA ‘Accountability Resources and Interventions’ per the US Dept. of Ed. Chart:

To see an excerpt about the REAL truth about interventions and ESSA:
“The WASPs (Wrap Around Service Programs): Unlike the nuts we’ve crunched so far, the WASPs won’t be inside the nuts, they will, however, be close by the nuts. This will be another huge part of the ESSA rottenness. Look for Promise Neighborhoods, 21st Century Community Learning Centers, SEL (social emotional learning) interventions, and much more. Page numbers and all the stinging news..”
To see the rest: https://www.commoncorediva.com/2016/01/04/meet-your-new-neighbor-essa-seriously/

As an added bonus, the CCSS Machine and the SEL (Social Emotional Learning) push ESSA will have embedded:
https://www.commoncorediva.com/2015/11/21/weekend-news-the-state-of-ccsss-sel/

Warriors, are you seeing the connections which make sense about ESSA and State Accountability?!
Smoke and mirrors tactic by the U.S. Dept. of Ed!! 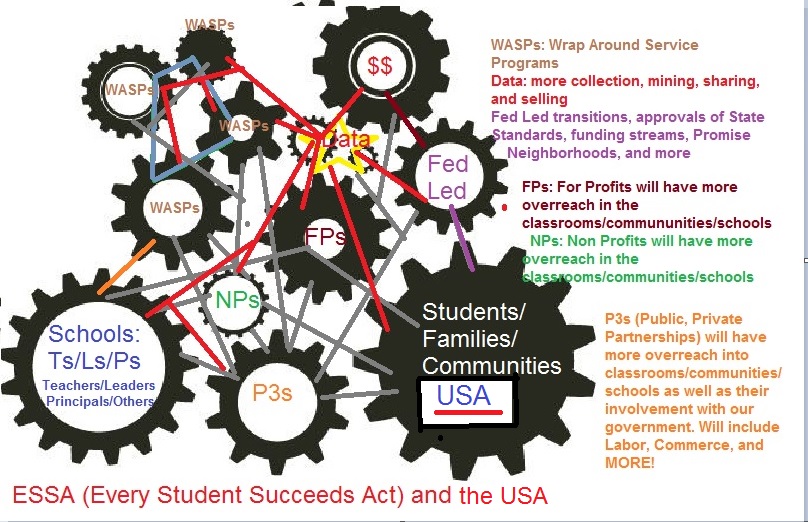