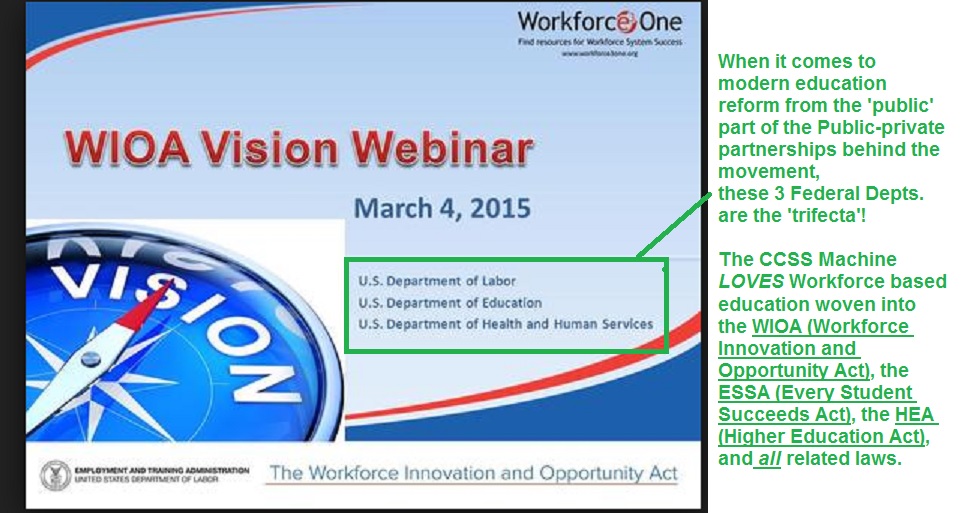 My fellow Anti CCSS/ESSA Warriors, while the U.S. Dept. of Education is anxiously waiting for the public comment period on the ESSA (Every Student Succeeds Act) Proposed Regulations to END, they are also busy pumping out MORE CCSS Machine rhetoric.

This time it is celebration of the 2nd anniversary of WIOA (Workforce Innovation and Opportunity Act). What does WIOA have to do with ESSA? After all, ESSA was supposed to impact K-12th grades only.

Well, if you haven’t been following my blog or research long, you haven’t seen how I was able to uncover how WIOA is written into the ESSA’s language; is now a mandated part of ESSA; how it ties CTE (Career Tech Education), CCR (College and Career Readiness), AAI (American Apprenticeship Initiative), CP (Career Pathways), CC (Career Clusters), and CBE (Competency Based Education) BOTH the laws together. You also haven’t seen how BOTH the Laws are also tied to the HEA (Higher Education Act), or, how HEA is also full of the alphabet soup names you see above.

What does the WIOA have to do with the Proposed Regulations for ESSA? Put briefly, plenty. The Regulations mandate that in the name of ‘State Accountability’ TO the ‘Fed Ed’, how ALL students must be shown as on track for College/Career Readiness; that ALL teachers MUST teach to post-secondary readiness, and more.

These will help you connect the dots between then and now.

2014:
One of the most eye-opening articles about WIOA, which will pre-date ESSA’s passage and HEA’s renewal (for funding purposes only) is this one , below. Sec. of Labor Perez is gloating about how this (then) new Law would revolutionize education. See: http://preventcommoncore.com/?p=1187

This article will show you how Sec. of Ed Duncan and Sec. of Labor Perez visited MA to put on a dog and pony type press conference promoting the united efforts of the Ed/Labor through CCSS and more. See: https://www.commoncorediva.com/2014/10/16/tech-thursday-duncan-goes-to-massachusetts/

Another related article details how the President put the Vice President in charge of a workforce based shift for education which includes not only the federal departments previously mentioned, but shows you what other federal agencies are involved. See: https://www.commoncorediva.com/2014/11/02/rmt-sunday-vp-common-core-and-jobs/

2015:
This article has a variety of workforce based education facts, see:

Also related is the article where you can see how the Health and Human Services was taking advantage of the shift for workforce based education. See: https://www.commoncorediva.com/2015/09/27/weekend-news-tracking-the-ccsscteworkforce-aligned-society/

From Dec. 2015, when the ink from signing ESSA into law was barely dry. How ESSA and HEA are connected and how WIOA ties them together for a seamless bridge from cradle to career.
See: https://www.commoncorediva.com/2015/12/05/weekend-news-essas-untold-ties-to-hea/

Related is this one where you can see how the federal agency, Housing and Urban Development is behind the ESSA/WIOA/HEA laws. See: https://www.commoncorediva.com/2016/05/10/silent-partners/

You may also like this one from earlier this month. Since the ESSA is trying to mislead us by switching language from the Common Core State Standards to College and Career Readiness, I look at the push for how the States are redefining WHAT CCR means. See: https://www.commoncorediva.com/2016/07/09/ready-or-not/

Release just a few days ago, is this Press Release from the U.S. Dept. of Ed about WIOA’s ‘virtues’. http://blog.ed.gov/2016/07/5-things-know-wioa/
You can be sure the current Sec. of Ed, Dr. King is ‘partying on’.
Among those 5 things ED wants to know and celebrate (but haven’t told you to down sides about each) are in bold type, my ‘down’ side to each will be italicized.

a) education reform for 21st Century skilled labor
b) a job network across the nation relying upon massive data mining/sharing
c) the job network will ensnare anyone looking for work and align them via training or re-training
d) community-wide, P3 involvement for reform (by the way, ESSA mandates region specific educational tracks)
e) evidence-based research and benchmarks (in other words subjective and selective resources to fit the reform agenda). (*Note: as far as ‘benchmarks’ for career/workforce based education, see what I found out about them back in 2014:
https://www.commoncorediva.com/2014/09/25/tech-thursday-cte-career-technical-education-workforce/) According to the National Association for CTE, the last time the information for benchmarks was updated was 2014. See:
https://www.careertech.org/sites/default/files/Achieve%26NASDCTEc-CCSS-CTE-ResourcesApr2014.pdf

Aren’t you ready to break out the confetti and balloons?!

Here is the slick video sales pitch for how great WIOA is about connecting the nation via education, data, and more.


If you would like to see this older slide show about WIOA being implemented in your State:
http://slideplayer.com/slide/9109162/

If you would like to see how I have been able to connect the Workforce 3in1 (now called by a newer name) to those job centers ED is so excited about and are mentioned in the above video. https://www.commoncorediva.com/2016/05/02/makeover-for-workforce/

As the march toward a complete implementation of ESSA, we will see more rhetoric like above. We must be consistent in exposing the rhetoric, Warriors! So know that all the WIOA/ESSA/HEA laced education is awaiting our nation in the upcoming 2016-17 school year.

One way to help exposure from our side of the War Against the Core is to publicly comment on the Proposed ESSA Regulations, especially where the connections between education and workforce exist. From the researched evidence for the ESSA Proposed Regulations, the anti Fed-Ed group, US PIE (United State Parents Involved in Education)’s special team found the following.
1)   “ESSA is supposed to give flexibility and more control to States by decreasing the burden of reporting requirements. Proposed regulations 299.13 and 299.19 will expand data reporting for “States and LEAs in order to provide parents, practitioners, policy makers, and public officials at the Federal, State, and local levels with actionable data,” which will entail additional costs for States. These reports must include accountability indicators to show how the State is aligned with a College and Career Readiness Standard (Common Core).”

2)  “Proposed 200.21 through 200.24 require LEA’s to include evidence-based interventions in order to receive improvement funds. Such interventions include the safe and healthy school environments and the community and family engagement plans. These plans include the heavy use of surveys—student surveys and home surveys.”

3) “Proposed 200.14 states assessments provide information about whether all students are on track to graduate “college-and-career-ready” (Common Core).”

To see the entire document of federal overreaches from this special project: http://nebula.wsimg.com/c3dbda7825b179bb2ad5358ef3acc6a4?AccessKeyId=13C8A0E7EBB1F1E5E658&disposition=0&alloworigin=1

To publicly comment against the ESSA Proposed Regulations:
https://www.regulations.gov/docketBrowser?rpp=25&so=DESC&sb=commentDueDate&po=0&dct=PS&D=ED-2016-OESE-0032

If you are interested in my formal dissent comments on the ESSA Proposed Regulations:
https://www.regulations.gov/document?D=ED-2016-OESE-0032-13765

Are you ready for a ‘Triple Hit’ of our own? I am!