Does It Really Matter? 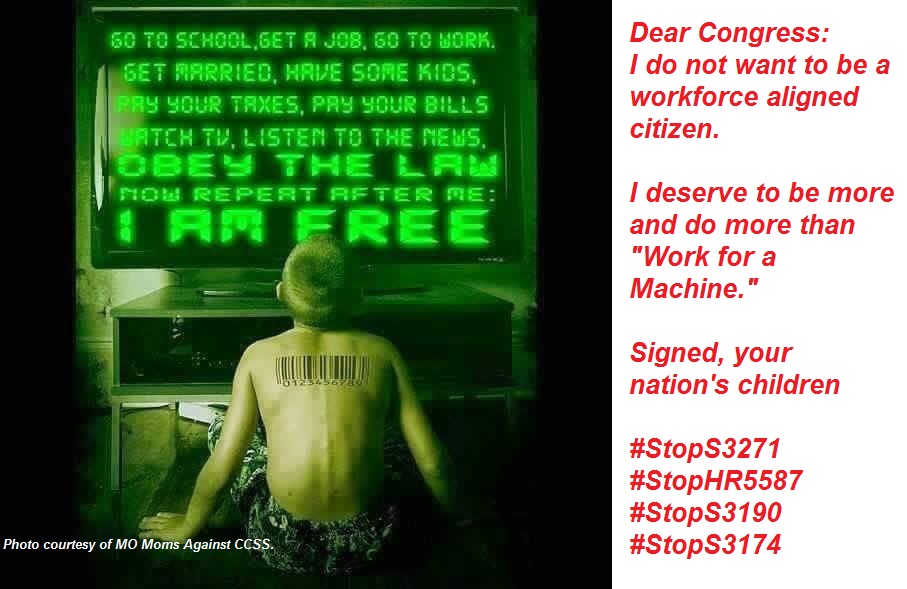 Warriors, it’s the day AFTER the biggest election we’ll see for another 4 years. Did your anti CCSS candidate win? While the dust is settling, let’s please remember we have SERIOUS issues, especially when it comes to education.
I realize I may lose some followers after this article, but I feel we MUST look at the entire scope of who’s leading in D.C….and in your States.  Warriors, we must not let our guards down. The CCSS Machine is JUST as much in the Republican party as it is the Democratic party. With both Chambers of Congress, we’ve seen a tea-totaling sell out to federally led education, NOT less! Are we really so caught up in the moment we are forgetting that while our President is important, it is Congress which is participating with the CCSS Machine evenmoreso?

As anti CCSS Warriors, we oppose not only Common Core, but:

CTE, Career Tech Education; which has been proven to be not only the adult form for the express purpose of skilled laborers to boost the national and global economy but has been tracked to trickle down from jobs to higher education all the way back down to early learning.

ESSA, Every Student Succeeds Act; which mandates MORE federal control; gives power to the U.S. Dept. of Health and Human Services; embeds skill based education for post-secondary readiness (embedding the U.S. Dept. of Labor); mandates STEM {Science, Technology, Engineering, and Math}, which embeds the U.S. Dept. of Education, the U.S. Dept. of Energy, the National Science Foundation, the U.S. State Dept., and more; re-brands Common Core as “Challenging State Academic Standards”, “College and Career Readiness”, “21st Century Learning Skills”, etc.; states that ‘region specific’ education is to be taught; makes teachers and school leaders into puppets for the CCSS Machine agenda; be it in the career and college readiness trap OR the ‘let’s all micromanage education by becoming pseudo doctors so we can  diagnose students of all ages and abilities. That way, the federal government can justify giving more Title One Funding with oh, so many MORE strings!’

WIOA, Workforce Innovation and Opportunity Act (which embeds U.S. Dept. of Labor into the education of our nation at ALL grade levels and consumes EVERY school choice!)
You’ll also find certain mandates from WIOA woven into ESSA. Without CTE, WIOA would be hard pressed to even exist as a federal law. Those mandates include: massive data collecting, tracking, and streamlining (the CCSS Machine uses the phrase ‘personalized learning’ to hide this) education NOT for academic and proper critical thinking, BUT, for ‘learn to earn’ (aka: workforce education) students capable of replicating orders. Other mandates include massive assessments for skill based learning, which lead to not so much diplomas, but certificates of national level. The higher the certificate’s level {literally platinum, gold, silver, or bronze}, the better job. The problem? No certificate, no job!
At least that’s how the skill-based assessment publishers have it rigged.

Warriors, in the months which have led up to this important election, I have repeatedly showed you how the CCSS Machine has carried out, via the U.S. Congress, their continued grinding down of education in the form of workforce based education. ESPECIALLY Career Tech Education!!!

Whatever amount of money each of the Congressional members may (or may not) of received; whatever special favor, or under the table endorsement; no matter what racket has corrupted them, the CCSS Machine is resting easy. But it will be cranking up again SOON.

Why? If you’ve not noticed, many of the CCSS Machine groups aren’t terribly ‘loud’ right now..BECAUSE they don’t have to be! The ‘bang for the buck’ payoff is this: Congress’ Ed/Workforce Committees in BOTH chambers AND including ALL political parties are being extremely loud right now.

Congressional Message from early November 2016:
Released the day BEFORE these crucial elections was the Joint House/Senate statement of ‘disdain’ for the U.S. Dept. of Education’s overreach. Yet, not one murmur about their own overreach! (If you missed it:
https://www.commoncorediva.com/2016/11/07/edworkforce-false-positive/ ) 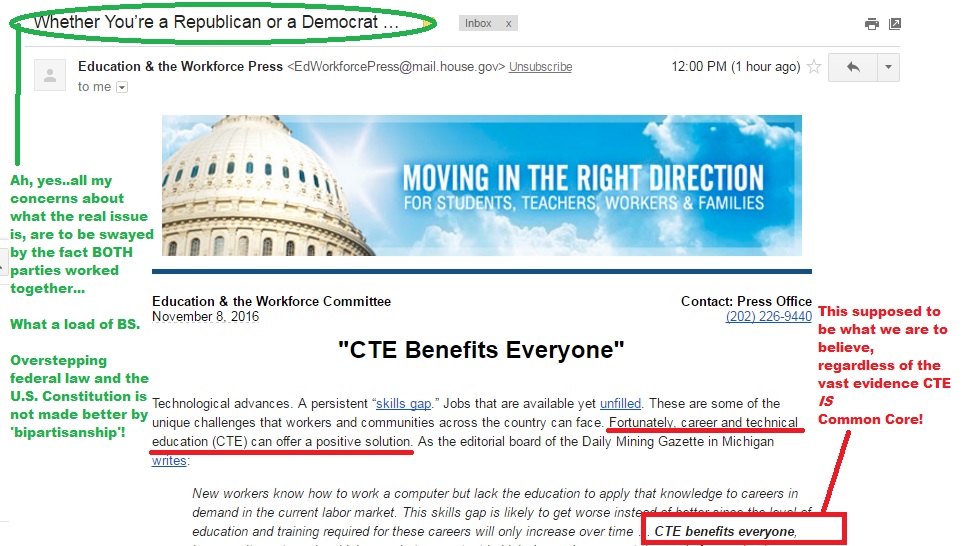 Congress is being a great megaphone for the CCSS Machine.

Here is what else the latest plug for illegally based education (yes, since CTE is Common Core, it too, is illegally based. It’s also been codified, thanks to OTHER Congressional laws.):

1) The Ed/Workforce Committee cites a quote from IBM. If we didn’t already know it, IBM is a HUGE CCSS/CTE Supporter!! Here’s an excerpt about IBM’s love for CTE, “By linking local employers with education leaders, CTE can lead students into successful, life-long careers and fill local economic needs. Take IBM. Through the Pathways in Technology Early College High Schools (P-TECH) education model, IBM has helped graduating students secure paid internships and mentors from local businesses who can offer career advice, guidance, and support.” (*Note: this is also in the email I received.)

3) That quote from the Daily Mining Gazette featured in the screen shot? The paper is based in Michigan. Michigan has had a huge sell out crowd to the CCSS Machine when it comes to workforce based education and CTE!

3a) Daily Mining Gazette is owned by Ogden Newspapers Inc (ONI). ONI has other small newspapers around the nation, as well. West Virginia for example. Workforce based education, aka CTE; as well as other connected programs are a big deal in this State.Their website can be found: http://www.oweb.com/newspapers.html
(*Note: ONI also is involved in healthcare! See: http://www.bloomberg.com/research/stocks/private/snapshot.asp?privcapId=901889 )

3b) You may also like to know that the ONI is held by the Nutting Family based in PA. According to what I could find out about this family, they own the majority of the Pittsburgh Pirates. See:
http://www.post-gazette.com/sports/pirates/2007/01/13/Nutting-becomes-Pirates-principal-owner/stories/200701130123
From the Pittsburgh Pirates’ website, here’s an excerpt proving their alignment to CCSS/CTE/STEM,
“Fantasy Baseball Math Opening Day: Wednesday, April 11 marks opening day for Fantasy Baseball Math, presented by Pirates Charities and Pirates GM Neal Huntington and his wife Becca, at selected Boys & Girls Club sites and five schools within the Diocese of Pittsburgh. The program is a comprehensive curriculum-based program that teaches children math skills using baseball statistics. This program aligns with Common Core Standards for math and promotes higher order science, technology, engineering and math (STEM) skills in preparation for math-based careers.”
See:
http://pittsburgh.pirates.mlb.com/news/print.jsp?ymd=20120403&content_id=27862948&vkey=pr_pit&c_id=pit

Resources For Your Proof:
1) To see the entire letter from Ed/Workforce:
http://edworkforce.house.gov/news/documentsingle.aspx?DocumentID=401137

2) I showed you in the 11/7 article how healthcare and CTE intersect. However, if you missed it: https://www.commoncorediva.com/2016/08/16/ctes-health-country/

3) To see my P-Tech article: https://www.commoncorediva.com/2015/06/25/tech-thursday-p-tech-its-here-its-now-and-its-part-of-the-p3-ccss-machine/ (*Note: if you’ve heard of the “Reinventing High School” document, this is where you can find it and SO much more. It also has information which will take you back in time to at least 2006.)
The Answer, As Far As I Can See It:

Warriors, in the title of my article, I posed a question. So far, I’ve not given a clear cut answer. What I have given you is plenty of evidence for you to draw your own conclusion.

From my researched findings, it does indeed appear that in spite of who will be our next President, Congress has laid out enough damage to TRUE American academic-based education, that it will not matter. Too much has been spent; too many laws (legal or illegal) have been made/broken; and, too many backroom deals have been crafted.

What has troubled me throughout this election is that Mr. Trump’s VP, Mr. Pence is an acknowledged ‘champion’ of CTE (Ed/Workforce Committee has even trotted out parts of Pence’s 2015 CTE speech in their propaganda blitzes.) Compare that to Mrs. Clinton’s well documented love for Common Core. Neither fact is very comforting, nor reason to lower our guards.

As far as what CTE propaganda Congress spits out today?  I’m sure we’ll know soon.
If you’d like to check the Ed/Workforce Committee on Twitter (where you can see all kinds of CTE propaganda):
https://twitter.com/EdWorkforce (*Note: The Senate HELP Committee needs to also be checked up on.)
********************************************************************
SO, am I suggesting that because America is so far down the education reform road we will not be able to turn back?! No!! Remember, America (other until otherwise noted) is a Constitutionally based Republic. IF you look at the definition of ‘republic’, you’ll find the CITIZENS are to be the ‘supreme power’, NOT the federal government.
Warriors, in plain speak, that’s ‘there are more of us than them’!! By the fact of sheer numbers, we CAN beat back this reform! Will it be a tough battle? Most assuredly. We will give up? Not likely until we die. Why? Our children (babies, teens, and adults) will face awful consequences if we don’t!

One more thing: we cannot rest on any laurels. Our work in not over. As long as there is federal abuse and overreach into education and all that goes with it, we have far to go.