A Fox In The Hen House

Warriors, in my last Weekend News, I shared with you much about the Ed/Workforce Committee’s latest email propaganda moves for education. (If you missed it, here’s the link: https://www.commoncorediva.com/2016/12/04/weekend-news-worker-ed/ )

As if to rubber stamp all the success of the Ed/Workforce under Kline’s leadership, it was announced on 12/2/16, that Rep. Virginia Foxx (from right here in NC) had been tapped as the new leader.

It hit the news on that same day that one of Foxx’s statements included how she’d love to take down the U.S. Dept. of Ed. While that may or may not be what happens under her rein over Ed/Workforce, I do know how unhappy quite a few of Foxx’s fellow North Carolinians are with her education votes from the past.

Look below and you will see how StopCommonCore NC reported her vote on ESSA (after HR5 and S1177 were combined): 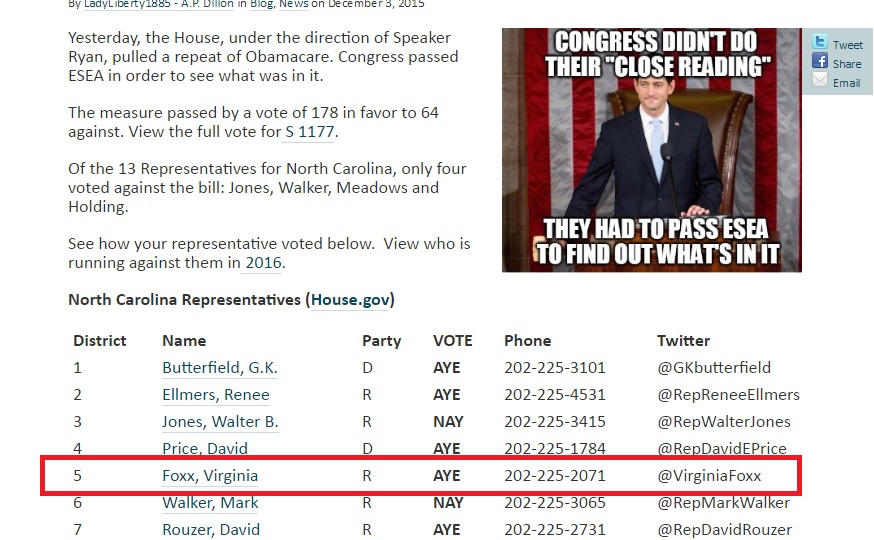 To read the entire article:
http://stopcommoncorenc.org/house-passes-esea-to-see-whats-in-it-see-how-north-carolina-reps-voted/

If you think Rep. Foxx will help rein in the U.S. Dept. of Education, please look at the screen shot below. The added emphasis is mine.

Here’s an excerpt of her statement, “H.R. 5587, the Strengthening Career and Technical Education for the 21st Century Act, updates the law to reflect today’s economic needs and the challenges that students and workers currently face.In particular, I’m pleased that the bill streamlines the number of performance measures for postsecondary programs and aligns them with the performance measures in WIOA, retaining that law’s precedent-setting accountability standards that let taxpayers and lawmakers see clearly which programs work—and which programs don’t. This bipartisan bill goes a long way toward ensuring that individuals who pursue a technical education have the knowledge and skills they need to succeed. However, I believe it’s time we acknowledge that all education is career education and stop dividing the path to a high school degree into two tracks.”
The entire statement: http://edworkforce.house.gov/news/documentsingle.aspx?DocumentID=400943

HR5587? That’s a nightmarish bill which has been championed as a savior for America! It’s also one the Ed/Workforce has used Gov. Pence’s 2015 CTE speech as a selling point. To see just how toxic for true academic education this bill is:
https://www.commoncorediva.com/2016/11/09/does-it-really-matter/

The Lady Doth Protest TOO Much:

About 1 month ago, I researched and published an article about the ‘angry 25’ Congress members who felt it necessary to pen a letter of disgust over the way in which ESSA was being implemented. One of those ‘angered’? Rep. Foxx. See the screen shot for an excerpt from that article. 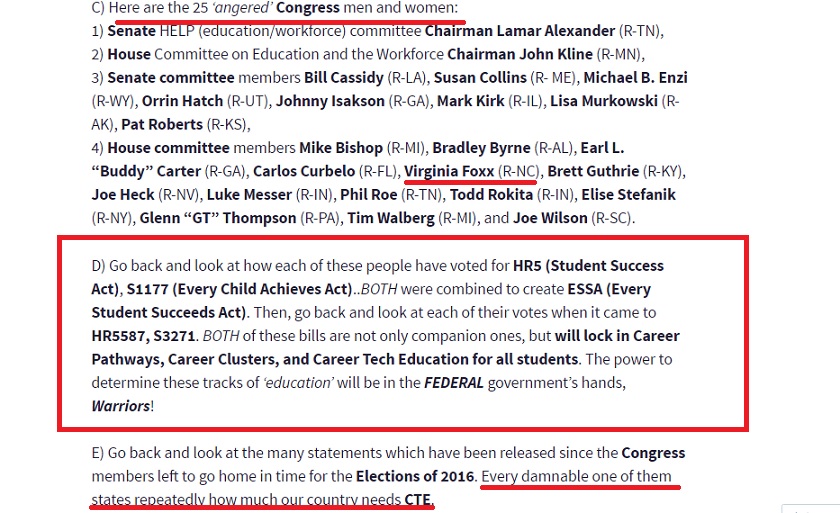 Since Rep. Foxx has a background in both business and education, I was curious as to when she went from academic based education to career based education. Especially in light of her bold statement (see the fox in the hen house picture).

According to the FEC (Federal Election Commission), among her recent Campaign contributors are:

Education Affiliates based in VA (a education business group which ‘delivers real-life career skills’) What’s interesting is that both managing members of EA were formerly employed by Global Knowledge, Inc. Global Knowledge, Inc. has ties to IBM (a huge CCSS/CTE supporter).
Their website: http://www.edaff.com/ (*Note: to see the management team info, select ‘management’. Click on ‘our schools’ to learn how education is a business for profit.)

Finance Scholar Group based in CA, but has offices across the nation. FSG assesses public policies and advises clients in strategic moves. They also conduct research. Among their experts are ties to at least 3 pro CCSS/CTE universities or foundations: Harvard, Carnegie Mellon and the Kellogg Foundation. Rep. Foxx was not listed among the FSG’s client list.
Their website: http://www.fsgexperts.com/

College America, Inc. (is part of Center for Excellence in Higher Education, Inc.) based out of UT, but has non-profit campuses across the nation. CA offers free GED courses (GED is now CCSS/CTE and College/Career Readiness aligned); skill based degrees (since 1964), and more. The parent company, Center for Excellence in Higher Education, Inc. is also based in UT. The sole stock holder, Carl Barney has a very interesting education philosophy. He literally bought schools without any educational background. His biography revealing this can be found: http://essonline.biz/Carl_Barney%20.pdf
Barney’s education activities were also reported in the NY Times:
http://www.nytimes.com/2015/03/03/business/some-private-colleges-turn-a-tidy-profit-by-going-nonprofit.html
The Center’s website: http://www.cehe.org/
College America, Inc.’s website: http://www.collegeamerica.edu/

There are probably many others, too. If you’d like the link to her FEC information:
http://www.fec.gov/fecviewer/CandCmteTransaction.do

SAS Institute was one of the most frequent presenters in NC at several hearings. Always in support of the Standards, too. Here’s one example:
https://ladyliberty1885.com/2014/05/22/an-nc-chamber-holds-common-core-propaganda-event-pt-3/

AT & T’s been supportive of CCSS/CTE in many ways. The Foundation arm of AT & T is a member of the GradNation Project; The AT & T website has a 21st Century Career Skill Initiative going on.
The GradNation link: https://medium.com/building-a-gradnation/to-young-people-across-america-8dd8d204c4d6#.kzpm8w93b
The 21st Century Skill link: http://about.att.com/content/csr/home/possibilities/at-t-aspire/powering-career-skills.html

However, the biggest ‘smoking gun’ about AT & T and the federal overreach into education can be seen below. To see the full announcement:
http://about.att.com/content/csr/home/possibilities/at-t-aspire/mobilizing-learning/connected.html

Will Rep. Foxx be another ‘ed champ’ or ‘ed chump’ for America? Unless she’s changed her views on CTE, it looks like the CCSS Machine has another ally in a strategic location. From the financial aspect, I do not think we need to wonder.