Recently, Secretary Arne Duncan gave a twelve minute (just over the 12 minute mark) radio interview while in MA to help promote more new government grants, programs, and ‘wonderfulness’ of all things Common Core/Workforce related. I’ve included the radio link for you just below. I’ll be giving the interview, the “Diva” analyzing treatment! This radio interview was recorded on Oct. 8. 2014.

As the hosts of the radio show were leading up to Mr. Duncan’s introduction, they shared WHY the Secretary was in town. To promote Community Colleges as job trainers.

Almost immediately, Sec. Duncan jumped in with how great things are in MA. In a paraphrased version of his exact words, community colleges are the solution! ‘We’ve invested $2 billion  in real training for real jobs‘. (Not really sure who the ‘we’ is he kept referring to, but I think I can guess). He went on to stress that there’s a real need for high quality real training. “We’re investing.” (was repeated quite a few times).

Community colleges are ‘becoming real economic engines‘ is another note Sec. Duncan threw in the conversation. One of his hosts threw this next statement as a lead in to a question. “Community colleges have become the de-facto job training centers of America. Are we up to the challenge?” Now, before I share Mr. Duncan’s answer, what is ‘de-facto’? Webster’s Dictionary tells us it’s ‘being in effect without formally being recognized’. So, community colleges are where the true job training is occurring..at least according to the host. Mr. Duncan’s answer was almost equally agenda-like. ‘Are we up to the challenge?’, was the question; answer, “Yes, grants for 1500 new training programs for high skill, high wages.” “I see people doing the right thing”. “Community colleges are model, baby United Nations.”

Now that you know all this, know that all the above happened in the first 3 minutes of the broadcast. The interview will not focus again on community colleges until almost the end of the radio show, however, in the meantime, check out all that was asked and said.

The radio host didn’t waste much time shifting the conversation from community college/job training to Common Core. His ‘out of the gate’ “Are we pushing CC too fast?”, was great. In a true politician’s form, Duncan sidestepped the entire question! His first red herring, was the bright picture MA has given the nation. Then, the next turn of the answer goes to ‘high standards-absolutely the right thing to do.’ Following this, at 4:45, ‘local autonomy..absolutely. Student learning should be only a piece of teacher evaluations. I’ve always said multiple measures are needed. High standards, new assessments, principal evaluations. Give local flexibility’. Then, his ‘common sense, middle ground’ phrase was sprinkled in here and several other key places.

Common Core Curriculum (6:08 into the interview):

When asked a question about “Common Core Curriculum”, Mr. Duncan said the phrase we all can recite by heart..“just Standards, not curriculum. Which we haven’t touched. We will never touch.”

Mr. Duncan..who do you think you are fooling?! So many people have posted pictures, written articles by the hundreds about CC Curriculum! Go visit www.commoncore.org (Lynne Munson is president) You really should spend a few minutes and get to know the other staffers and how into massive education reform they are. 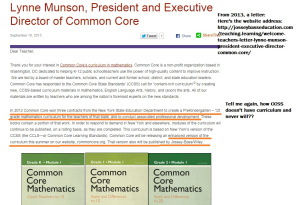 7:29 into the interview, teacher frustration:

Being a thorough host, the next question Mr. Duncan received was about the teachers being tied so tightly to the Standards, there was not time for anything creative, or, of themselves. Duncan’s reply went something like this AFTER he sidestepped the question…’If so, we must listen to the questions these teachers have. However, all the places in MA I’ve gone, there’s been nothing but positive feedback’. CCSS is the ‘best they’ve ever taught’ (speaking of veteran teachers). “When you give a high bar, you give teachers lots of room’. “Frankly, historically, it’s really quite the opposite with Ready Math.” Now, the math is officially called, “Ready Common Core Mathematics”. Look up a review of the program, better yet, talk to the parents, students, and teachers. Don’t listen to Sec. Duncan.

Mr. Duncan rolls out his ‘common sense, middle ground’ mantra again here. Quickly followed by his success at the helm of Chicago schools as the CEO. Wait, say that again?! That’s right, he said “CEO”. Unlike most school districts, Chicago Public Schools does, indeed, have a Chief Executive Officer. From what I’ve been able to find, the mayor of Chicago pretty much calls the shots as to who serves. Also, if you look back at when Mr. Duncan was in charge, things weren’t so great. Of course, if you subscribe to the pro side of CCSS, Mr. Duncan’s trace record is terrific, however, I found repeatedly more websites that cast shadows on his record as the leader of public schools in Chicago. My point, is why, when asked about testing, does he feel his performance from years ago factors into the forefront? My guess, to once again, produce a red herring. Here’s a quote, however, you’ll ‘love’, “Don’t be redundant, don’t spend too much time on test preparation. Don’t teach to the test. Great teaching leads to great results.” He then adds that “in education, we’re good at doing new things, we’re not always good at stopping what we’ve done in the past.” It is at this point, I simply shake my head.

Our charming hosts, once again pose a question about the tremendous pressure our teachers face over teaching to the test. Mr. Duncan, being such a ‘great leader’, has this to say. “Where people are raising standards, holding teachers and students to a high bar so students are truly college ready once they graduate high school and don’t have to take remedial classes, um, the exact right trade off is having that high bar, but giving teachers a lot more room to be creative, flexible–to hit that higher bar and so much of the changes you see here in MA and nation wide are to directly address that very real concern.” Ladies, gentlemen..do you see the train wreck of a sentence the HEAD of the U.S. Dept. of Education just gave you as an answer?!?! My stars in heaven! The grammar alone would be a clue, but the point; his answer is SO smoke and mirrors?! As a researcher, educator, and Common Core opposed, I can tell you, it really shows how out of touch with teachers this man is. Remember, however, he’s in charge of the entire US educational system.

Not knowing what level of research the radio hosts have, the next question was a bit of a surprise. It had to do with a recent statement Bill Gates made about a ‘common curriculum’. You’ll really need to hear the question for yourselves, but Duncan’s answer? Once again, the classic political side step! Here’s what he did say, “I’m less interested in that..again, having a high bar, having clear standards where students are truly prepared, makes all the sense in the world, but what happens is you have a big country..local educators know best, local autonomy. Where we should be looking is where we see success and where we don’t. We should be learning from those best practices and replicating them.'” More mentoring, he said; more support for educators. Then “where there’s less, challenge that status quo. I think how you teach children is best determined at a local level.”

The hosts and radio staff did a bit of conversing before Mr. Duncan appeared and they noticed that he was coming to MA quite a bit. When asked about the rapidity of his visits, Duncan had several nice things to say about MA. The main gist was the education in the state of Massachusetts is so right. He went on to tell the listeners how huge of fan of the current governor (Mr. Patrick) he is. He went on to gloat about how there’s no complacency. There’s a sense of urgency. Then, as a classic Washington, D.C. based person, he launches back into “too many of our high school graduates aren’t prepared for college.” “They are having to take remedial classes. Having  schools like Springfield Tech Community College are a great thing. Looking to create new programs to help young people gain skills they need for high wage, high skills jobs; I just LOVE the innovation, the sense of creativity here. I do think much of what happens in MA serves as a positive models in other parts of the nation.”

Wrapping all this up:

I did a bit of looking at the school Mr. Duncan was in town to promote and they have quite the impressive CCSS/STEM relationship. They also receive many federal grants.  If you were to look up the latest Annual Report (see: http://www.stcc.edu/aboutstcc/publications.asp) and turn to pages 44-46, you’d see a tremendous number of US federal grants with ties to Common Core/STEM (remember, as I’ve pointed out before, STEM is the main agenda for the USA and CCSS is the vehicle in which it is propelled).

But wait, remember the first graphic I showed you? It was the Dept. of Labor representative and the U. S. Dept. of Ed. representative there to promote Workforce Education. Look back to any of my Tech Thursdays posts and you will see how entwined CCSS/Workforce are!

What we can learn from all this?:

First off, really listen to these interviews posted. I have found that when those connected to CCSS/STEM/Workforce, etc. are talking when they think no one so important is listening…they spill many details. Details you can use to see how they really feel about all this.

Community colleges as job training forces..that’s worth investigating. Here’s your first ‘nugget’, over 11 billion dollars via the U.S. Dept. of Labor for such programs. See the entire file here, US LaborCommunity College job training 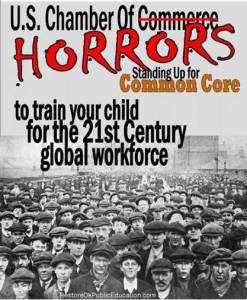