How many of you like math? Of all the subjects I had to learn, Math was not my favorite. My students, also, weren’t huge fans. However, knowing math is crucial, we carried on and were successful. Common Core Standards and math has been written about repeatedly. So, I’m not going to tackle it in depth. I WILL share a refreshing video I found on You Tube. A weather lady from WA takes on some of the CCSS aligned textbooks used in current classrooms. She exposes the fallacies, fibs, and missteps of TERKS and Everyday Math.

While her presentation speaks much truth and shares information you can use, please note her recommendation of Singapore Math (about 14:40) is my only problem. Why? Because Singapore Math has CC aligned textbooks. **NOTE, not all Singapore Math is aligned, however, you must read carefully IF you wish to avoid the CCSS. 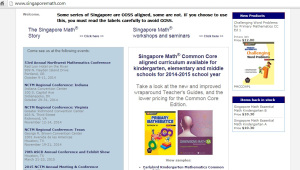 http://www.singaporemath.com/v/PMSS_comparison.pdf (gives you a side by side comparison of where CCSS is and isn’t)

While not mentioned in the YouTube video, I have the Kindergarten book as part of my CCSS evidence. On the cover is a bright and colorful fish. Here’s what the kids are expected to do: 1) make sense of patterns and persevere until all work is completed, 2) reason abstractly and quantitatively, 3) construct viable arguments and critique others reasoning, 4) model with math, 5) use appropriate tools strategically, 6) attend to precision, 7) look for and make use of structure, 8) look for and express regularity in repeated reasoning. Since Pearson Publishing owns EnVision, you can go to their website and read about how much research the program is based on. (ha ha, guess where the ‘Fib-o-Meter’ would place those claims?!) However, read this eye opening truth from an elementary teacher: “About halfway into the year (or maybe it was around March), parents of the second graders started coming to me complaining about the way EnVision teaches subtraction. Kids and parents alike were struggling with it. They use a strange system of a visual tool they created (gotta come up with something original, after all) that I think was called “10 cards” or “10 spot cards” or something of the sort. It’s positively awful. The parents were clueless. I struggled for quite some time to figure out what they were doing in the illustrations. I then compared it side-by-side with Singapore and the flaws in the Envision method were numerous and obvious.“

What Works Clearinghouse (a part of the U.S. Dept. of Ed, states that EnVision falls within the Standards. See the entire report:

Sorry, ‘What Works’, you are full of fibs! Check out what these parents said,
“While the focus on conceptual understanding may give the impression of being more rigorous, we find enVision is lacking in depth in many topics (e.g. multi-digit addition and subtraction) and does not provide adequate practice to ensure procedural fluency (e.g. doing multiplication and division word problems prior to mastering the basic facts). Over the past 2 years, we have questioned how to do HW(homework) and test problems, where the answers seem to disagree with our calculations. As we progressed, we realized that many of the enVision math topics are being presented differently than we learned, such as multiplication as repeated addition and division as repeated  subtraction. While it is true that some multiplication problems happen to be repeated addition, this is not the main purpose or property of multiplication – proportion is the main idea, but enVision drums it into the kids’ minds to think of multiplication in this limited way. We have noticed with concern that there is a focus on how to think and not primarily how to solve math problems. Our problems are not limited to Xxxxx’s classes, but to other grades as well, such as the pre-testing done at xxxxxx, which takes an entire class period to test the kids on topics they have not yet learned in order to place them in groups when you, the school/teachers, have enough data to predict who belongs in which level group. Some of these problems or errors could be the result of enVision being a very new program and the bugs have not yet been discovered and corrected, and some the result of apparent disagreements among math professionals.”

If you’d like to see more about Everyday Math, EnVision,

A well known CCSS supporter, Mike Petrelli was featured on an ‘IntelligenceSquared’ debate recently. Here’s what he had to say about Common Core and students, “Common Core helps narrow the achievement gap.” He went on to say that when you embrace the Common Core, you are embracing schools with standards; that kids will be ready for what’s next when they graduate high school, either college or a good paying job–radically different than how we’ve done things in the past. Really??

Sorry, Petrelli, you are busted on the ‘Fib-o-Meter’!

Before I leave you for today, be sure to view this video about Math in a classroom: https://www.teachingchannel.org/videos/teaching-number-patterns