Fib-0-Meter Friday: As Heard in Committee

As you well know by now, this past Monday the NC Academic Standards Review Committee met in Raleigh, NC for its 3rd meeting. The Committee is to be giving the Common Core Standards a ‘once over’ to see if we are to keep them or not. We certainly can’t alter them, as the Standards are copyrighted. Strange, I distinctly remember the LAW that was signed said “REPEAL” not “Review”!

Rather than rehash what others have already reported, I thought I’d offer up some of the bald face misguided truths that I heard while in attendance.

First up on the Fib-o-Meter:

The first “Guiding Principle” of the Committee as stated by one of its co-chairs, “The Academic Standards represent the citizens of North Carolina”.  Really, Mr. Co-chair?! Which set of citizens would this be?!
When the citizens of NC were allowed to speak out (March 20th, 2014) at the only public comment hearing thus far concerning Common Core, the majority of speakers were AGAINST the Standards!
When you Google “NC CCSS Supportive Groups”, search results give you 167,00 results. When you, by contrast Google search for “NC anti CCSS Groups”, the results? Over 8 million (8, 360,000 to be exact). Yes, I realize it’s not a certified study, but it proves the point, that Common Core representing the citizens is a ‘Total Fallacy’!

Next, ‘The Standards prepare all students to be ready for post-secondary life and/or workforce.’  Many certified studies have been conducted to disprove this point (which is the 2nd guiding principle of the Review Committee). I especially ‘liked’ (sarcastic moment) how Mr. Co-chair stated we’d live in this principle. Gag me, please! One of the authors of CC himself even stated the Standards wouldn’t prepare students for what we were told they’d be prepared for!! This statement? No question, ‘Total Fallacy’!

There are other guiding principles, but the more the speaker was reading them, the more like a Common Core sales pitch it took on, not a list of  objective goals. That said, let’s see what else was spoken that can be measured..the “Fib-o-Meter” awaits….

One truth that was shared by the main presenter was that “CTE is woven into the Math Standards”. How do I know this is ‘Total Truth’? Perkins Act 4 Funding is set aside for secondary and post-secondary schools. This includes students from age 5 to 17. So, certainly CTE (Career Tech Education, aka: “Adult Common Core’) is woven into the Math Standards. Besides, you can’t have streamlined worker drone if you don’t weave CTE in at earlier levels.

You Gotta Be Kidding Me:

As the afternoon wore on and the presentation bogged so far down, we might as well have been stuck in mud, the lady speaking was expressing how free thinking CCSS Math can be when this next line was spoken,

“By not having options in Math, you really do have options.”  What?! The context surrounding this ‘wise’ statement had to do with NC’s choice to go from 4 levels of required Math, down to 3. Meaning, all those really high level courses beyond Algebra I are not required. Her point was trying to embrace the streamlining that CCSS math accomplishes. In her way of presenting, by eliminating isolated math concepts, learning and switching to integrated concepts/learning, we’ve been able to increase results. However, she missed it by a mile with the no options equals plenty of options. ‘Total Fallacy’ for this statement.

Shared during the marathon meeting was the fact an educator survey was out, and had been either completed or was almost completed. Supposedly, a parent survey is due out soon. Those of us in the audience wondered what parent survey? The better question for educators survey is which survey? I found one from 2011 on the Gates funded ASCD/pro Core site where NC educators had this to say about the CCSS:
Received Training
• 77.5% Yes
• 22.5% No
Have the Resources to Implement CCSS
• 55.5% Yes
• 44.5% No

Or maybe the educator survey being referred to was this one by the NCAE published in 2013:

“In the fall of 2012 NCAE conducted a survey on time to teach as we were hearing from members and non-members from across the state that teaching time was limited as they worked on CCSS pacing guides and new assessments. In this 2012 survey 94 LEAs and two charter schools responded. The largest group we
heard from was PreK-5 at 54 percent, middle school 25 percent and high school 20 percent with 83
responders being administrators or retired and substituting.
Questions from the 2012 Time to Teach survey relevant to CCSS had the following results:
In your school community has Common Core been integrated into the NC Curriculum/Essential Standards?
Yes 96% No 4%
Has your school or school system created a separate report card for benchmarking the Common Core?
Yes 17% No 83%
Do you feel that the Common Core standards are adding value to your classroom and curriculum?
Yes 58% No 42%
Do you feel that you have had adequate preparation in the implementation of Common Core?
Yes 30% No 70%

We are aware that other surveys have been conducted over the course of this school year regarding
CCSS. The Gates Foundation, Scholastic, and the NEA have surveyed educators, parents and community members. The results from these surveys are similar in outcome. There is more support for continuing CCSS into school curriculum instead of stopping the implementation. There is confusion and need of support for parents/guardians in better understanding the new standards. There is a need for relevant resources and aligned textbooks.” (see the rest of the survey:

So, truth,fallacy, or in between?! Before we answer this, let’s review. First, yes, it was shared an educator survey is out, but WHY? That wasn’t clear. Was it to side step the dire distress of a bogged down meeting? Was it to win back a bit of favor so that we, the audience, would be impressed? It’s hard to tell. I do know from being there, the original question posed (that wasn’t really best served by bringing up the educator survey) was what areas of CCSS have been identified as needing attention. Still no word on that parent survey alluded to. For missing the mark on such a valid question, Fib-o-Meter gives this, “Total Fallacy”. I’d have to throw in an ‘infraction’ of purposed misguiding, too.

Last thoughts for this Friday:

As a taxpayer, I’m insulted that the entire process from the time the law was signed to REPEAL Common Core in NC to now has been abused. It’s been manipulated to suit everyone except those most impacted: our students. I do thank the members of the Committee whom I know are opposed to Common Core.

However, for those who appointed members to join this committee, the stacked deck of those who appear to support Common Core heavily outweigh those who don’t. You totally missed the mark on early childhood experts, parents (who are experts in their own right).

The disgraceful fact that no funding for this Committee to properly do its work. Sorry, NC, it felt more like a bad episode of a ‘run around’ the Keystone Cops or the Three Stooges would have aired. To date, and to the best of my knowledge, there’s been no comparison of any other standards that would better serve our state. There has been a reliving history moment or two about what NC used to have and how poorly it served us.

You wish to best serve our students? You best wish to honor the citizens tax money? Ditch the Common Core from EVERY nook and cranny! Allow the Committee to do its job properly for starters. Stop stacking the deck to suit the stakeholders with the largest checkbooks. Education should be a free market system, not an idiotic mess. 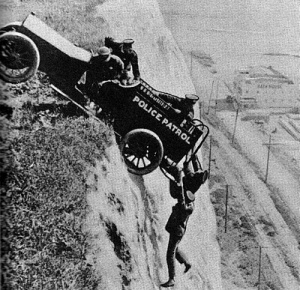 A classic “Keystone Cops” goof up moment.
Will this be how NC’s education is viewed?