This is a special Fib-o-Meter Friday for those of us opposed to Common Core Standards and all that goes with them. Come along with me as we look at the truths, fallacies, and other mutterings from the Council of Chief State School Officers from this past week’s gathering.

In order to frame this article in the proper context, I would ask that you try to remember an 80s song called “Hungry Eyes” by Eric Carmen. There’s one line that suits the CCSSO’s grasp on not only American Education, but our entire American set of values, ways of life, and how we live them.

“You’re mine tonight. Now I’ve got you in my sights.”

Fib-o-Meter’s first set of evidence for the CCSSO’s power grab will be for the children. See the screen shot below:

Yes, warriors, it’s “Total Truth”, at least in their plans to have our kids achieving the ‘collective good’. What other evidence can we find to support this? Let’s see….from the CCSSO President Dr. June Atkinson’s prepared remarks in her address to her underlings in the CCSSO, the following excerpt, “In North Carolina, for example, we have a statewide technology platform called Home Base. This comprehensive technology system incorporates student information, a parent portal, instructional improvement, educator evaluation and professional development tools all in one place.” Yes, it’s the “Total Truth” that “Home Base” is in use. BUT, what wasn’t shared was the fact that Pearson Publishing runs the platform. So, all that student data gets mined through Home Base! Data that is VERY private about NC’s students! Data that goes to a wide variety of ‘customers’.
If you’d like to see my article on NC’s Governor’s Teacher Network (which goes into more detail about “Home Base”, as well as CCSSO’s tie to the companies behind it, see: https://www.commoncorediva.com/2015/02/04/wybi-the-gtn-of-north-carolina/)

Need a bit more evidence? May I offer the following: Pearson’s ‘Power School’ which is a portion of the “Home Base”, has turned out to be a resounding dud in NC, but that “Total Truth” wasn’t mentioned in the CCSSO address. To get the rest of THAT story, see: http://ladyliberty1885.com/2014/11/11/pearsons-powerschool-redefines-epic-fail-in-nc/. Be sure to access her links in the article. There are first person accounts of just how far the data trail goes.
If you want to see how “Home Base” and “Power School” are connected, see: homebasepresentation

If you’d like to see the CCSSO’s real agenda for your students, be sure to check out their priorities as tied into HR5 (Student Success Act or the re-authorization of ESEA). First on the list: assessments! See: ESEAKeyProvisions

This, also from the prepared statements of Dr. Atkinson, “Speaking of progress, it is important note that for the first time in our nation’s history, we have a shared set of rigorous and relevant learning standards.” Now, she does go on to explain the exceptions to the statement (like a few states have since decided to use other standards, some elected to NOT use CCSS in the first place). “Total Fallacy”, President Dr. Atkinson! Research has proven the CCSS is NOT rigorous, students are bearing out the fact the Standards aren’t even relevant! Good grief. Interestingly enough however, see what showed up on Twitter that shows you how the Chief of the Chiefs really feels! See the screen shot: 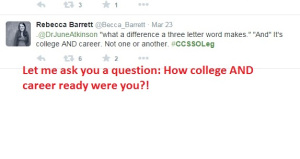 To see the rest of the prepared statements so you can do your own “fact checking”, http://www.ccsso.org/Documents/2015/FINAL_SOS-1.pdf

To see the Tweets connected to the CCSSO Legislative Session, which cover the push for re-authorizing the ESEA (HR5, or Student Success Act) to meeting with Congress, Sec. Duncan, and more drama than a bad soap opera, use the “CCSSOLeg” handle next time you log on to Twitter.

Grabbing and shaping the leaders is also a big part of the CCSSO’s hunger. What do I mean? I found a 2012 document of a 3 prong, pro-CCSS task force where the findings are to be used from the SEAs (State Education Agent) level all the way to the LEAs (Local Education Agent)! The 3 prong force? That’s easy. The CCSSO, the NGA (remember, both own one half each of the CCSS) and the NASBE (National Association of State Boards of Education). I recently wrote about NASBE and just how sold out to CCSS they are. Gates Foundation funding has helped them further align their design for education. See: https://www.commoncorediva.com/2015/02/14/sic-em-saturday-do-you-know-nasbe/

As far as the SEAs and LEAs, I’m including the entire Task Force Report for your research. Suffice it to say CCSSO believes it is their ‘responsibility and promise’ to ensure EVERY student is college/career ready AND that those teaching will be in total alignment with the process. See their report: Our Responsibility Our Promise_2012. For the CCSSO to assume every student’s future is their responsibility/promise is “Total Fallacy”. How presumptuous can one organization be?!

Before we move on, I did find one interesting document from the CCSSO archives from 2006 about the SEAs/LEAs role in controlling  assessment data. Now, while I know systems have been updated, the document has a 5 year plan, which means 2011. About the time CCSS hit us. Various states and what works best for them are highlighted, data flow systems are described, and more. If you want a good idea of the recent past in your states education assessment tracking, this is a good resource. See: http://www.ccsso.org/Documents/2006/Validity_Threats_Detection_2006.pdf (*NOTE: the CCSSO has an entire collection of resources to increase SEAs/LEAs via more of them and how they are to operate. For example AND still being offered as a great resource on their website is the 2010 SCEL (State Consortium on Education Leadership; a part of CCSSO) report about increasing district leadership. Included is partnering with others to increase effectiveness. See: SCEL_Draft_Toolkit_2010)

The Collective Aspect of CCSSO’s Hunger:

Lastly, the Fib-o-Meter offers you the “Total Truth” of how vested CCSSO is in ‘collective’/’greater good’, etc.
Look at their partners, their joint projects. The most telling example is with “Knowledge Works”. As I’ve shared with you before the the ‘community cradle to career’ movement is not only strong, but already growing across America. Totally social minded in that the community must be ‘all in’. Totally aligned with the agenda of CCSSO’s ‘responsibility/promise’ rhetoric. If you’ve not seen the CCSSO partner page, you really should. http://www.ccsso.org/Who_We_Are/Business_and_Industry_Partnerships/Corporate_Partners.html

As many of you may know, I am a full time care taker to my mom since her diagnosis with a terminal disease earlier this year. That said, my Diva family and I will be gathering this weekend to celebrate her birthday. I am looking forward to joining my warrior family (that’s you) back on Monday, March 30th.