Sic’ ‘Em Saturday: CCSS, Too Big for Your Britches

Common Core Fever has caused some states to get too haughty, or too big for their britches. Let’s examine.

First, a bit of background:

“Too big for your britches”. It’s meaning is ‘one is too conceited, thinks too highly of oneself’.

Common Core has given some states, like NC, the dilemma of haughtiness to  an extreme. However, like the picture above, when our britches get to small, all sorts of unmentionables start showing. Citizens, if you have found that your state has gotten too big for its britches with Common Core, APUSH, Next Generation Science Standards, STEM, Career Tech Ed, Workforce Innovation, or any of the other Common Core Machine related avenues..it’s time to ‘sic’ ’em’!!

How the Feds got too big:

“Truth in American Education” said this, “Parents and citizens are the key to eradicating federal overreach.” (see the rest of the article: http://truthinamericaneducation.com/common-core-state-standards/parents-and-citizens-are-key-to-eradicating-federal-overreach-into-education/) Their suggestion? Start by defunding the Dept. of Education.

However, I’d like our focus to be on the state level today. After all, according to the U.S. Constitution, the states are sovereign, not the federal level. So, what happens when the state’s sovereignty causes those in authority to get too big for their britches?!

Oh, North Carolina, you shouldn’t have:

The Triad Conservative, on 12/3/14, reported that the NC State Board of Education had filed all the necessary paperwork to sue the State of NC. Why? To not be held accountable, it appears.
The ‘Conservative’s’ story  includes information, that as a citizen, I need to know. Such as the NC Rules Review Commission (NC RRC) is in place to offer transparency to the citizens of NC about all kinds of state agencies and their affairs. Think of it this way, the NC RRC is the one which makes sure the state offices don’t get too big for their britches. The Rules Review also examines every state law, policy every 5 years to make sure the citizens are being well served and that the agencies aren’t becoming overbearing. (see the entire entry with accessible links embedded: http://www.triadconservative.com/2014/12/nc-state-board-of-education-suing-to-evade-accountability-transparency.html)

The State Board of Education’s website has no mention of an upcoming lawsuit that I could find. Not really surprised given the track record of this State level education agency. They’ve been notorious about being mysterious, especially in the most recent years.

The britches start to shrink:

The State Board of Education and  the NC Dept. of Public Instruction have through the years interchangeably had a reoccurring theme of wanting to be omnipotent and reclusive. Take into consideration, when the Lt. Governor requested simple answers from the NC DPI where Common Core was concerned (2013) instead of simple answers, overt maneuvers ensued. See this story from the “Daily Haymaker”, http://dailyhaymaker.com/?p=5867

There are countless other accounts of the NC DPI’s less than transparent acts. The State Board of Education is also not as forthcoming as it should be..for both, especially where Common Core or any related portion thereof is concerned.

If you’ll look at the picture below (be sure to click on it to enlarge it), you can see HOW the organization of government is expressed. The State Board of Education is the entity over the Dept. of Public Instruction, while the State Superintendent is a lateral position.

Here in NC, the State Superintendent AND the head of the Dept. of Public Instruction are the same person. Not only that, but that person is the new president of the Chief Council of State School Officers (who is 1/2 owner to the copyrights for Common Core). The Lt. Governor serves on the State Board of Education. {Remember I shared the Lt. Gov. had asked some questions and got the run around?} The State Board of Ed also has a treasurer and 11 members appointed by the Governor. The General Assembly must confirm these choice candidates. 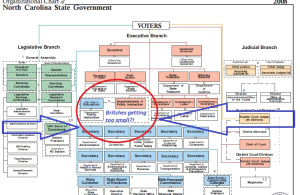 When the britches were new (or updated):

Way back when in 1776, North Carolina adopted a state constitution carefully laid out to grant and protect liberties to its citizens; structure and guidance to its leaders. Complete with a Preamble and 14 articles, this document has guided us for many years. Education, is article 9. Down through the years the state Constitution has had some additions, deletions, and modifications to keep it going. As far as education, the NC State Constitution of 1971 “addressed the ongoing needs of public education, especially regarding funding, school attendance, and organization of the State Board of Education. The legislature’s responsibility to support higher education, not just among the campuses of the consolidated University of North Carolina, was also affirmed.”

Now I won’t bore you with much more about this part of our history. I am laying out the back story so you can better see how ‘too big for their britches’ the state level of government concerning education has become.

Back to today’s small britches:

So, we have not one, but 2 state level agencies overseeing education which are less than transparent, accountable, or willing to be concise. You have one person who is serving and is trying to find truth. Add to this a governor who is sold out to Common Core, then mix in a few legislators who’ve also sold out.

Wait…you don’t know that the governor has been a supporter, or that some of our legislators have been not only in favor but seen at pro CCSS meetings??!! Gasp! Here’s an excerpt you’ll need to see, “The governor expressed his approval of the Common Core State Standards on reading and math, which have been adopted by 45 states but have recently been bashed by some conservative commentators and state legislatures. McCrory said the standards are high and relevant. “It’s not the standards that are bad; it’s the execution which must be improved here in North Carolina,” he said. State Superintendent June Atkinson said she is glad McCrory supports the Common Core standards. “It is important for our teachers and communities to recognize that they are rigorous standards and we need to move forward.” (see the entire article: http://dailyhaymaker.com/?p=5948) Want another side to the governor’s wishy-washiness? http://ladyliberty1885.com/2014/08/25/nc-governor-mccrory-unveils-operation-rebrand-for-common-core-video/

What’s more is the governor and at least one part of the General Assembly made a mockery of law and committee assignments to the ‘Repeal Common Core Committee’ (which has been ‘dumbed down’ to ‘Review Standards’) Here’s when it was “Replace” (http://www.breitbart.com/Big-Government/2014/07/17/North-Carolina-Governor-To-Sign-Bill-To-Replace-Common-Core-Standards) Here’s where it was switched to ‘review’ (http://pulse.ncpolicywatch.org/2014/09/16/nc-common-core-review-commission-finally-assembled-to-meet-september-22/) Now, mix all this together and add in that out of the 11 members on the committee, only 2 are known opponents to CCSS. Throw in the committee’s job is impeded at every turn (ie: no funding, so no experts outside of the NC DPI have been called).

With all these britches getting so small it’s a wonder the residents across the state haven’t been hit by flying buttons as they sail through the air! (take a 40 second laugh break and watch the buttons fly)

1) Don’t be reactive if and when your state repeals Common Core, learn from our plight. Have a plan so that when the wonderful opportunity to kill CCSS in your state arrives you can embrace it.

2) Encourage your leaders to be brave and stand up to the CCSS machine. Don’t allow them to sell out. Hold their feet to the fire.

4) While those leaders are people like you and I, it doesn’t make them more important than we are. Don’t allow them to marginalize you.

5) Use truth, not opinion. Look at the mess opinions have made. Truth isn’t messy, especially where Common Core and all its components are concerned.