FOM: Trying to Turn the Tide to CCSS

Just released from the Common Core Standards laden group, Foundation for Excellence in Education, is a report titled (and this is NO joke) “Turn and Face the Strain”. The report is a true ‘gloom, doom, and we’ll all perish UNLESS we adhere to FEE’s way of aligning education’..This one’s going to be good, so, let’s crank up the Fib-o-Meter, shall we??!!

You’ll want to download the reports, I’m sure, so here’s the official website for all things Strained, http://excelined.org/FaceTheStrain/

The Truth?! Are You Kidding Me?!

Before we begin the Fib-o-Meter, let’s take a couple of minutes to see the 2 foundations behind this ‘grinding, binding, and trying to frighten us’ report. First up, Foundation for Excellence in Education. If you’ve been following the CCSS saga long, you’ll know that Jeb Bush is responsible for this organization AND is a huge voice FOR Common Core! The other foundation is the Friedman Foundation for Educational Choice. According to their website they state school choice is their stance. That stance includes private schools, homeschools, however, look at the graphic they use: 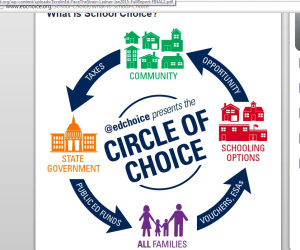 If you haven’t clicked on the picture above to enlarge it, you’ll miss the ‘smoking’ pro CCSS gun: “ESAs”. How do I know this? When you type in “Education Savings Account Common Core” into your general internet search bar, the results are astounding. Credible groups, one after another, have written how this ‘false choice’ is NO choice BUT CCSS. (for example, see these 2 stories:
http://dailysignal.com/2014/12/20/why-even-common-core-supporters-are-changing-their-minds/ OR http://www.educationviews.org/establishment-educators-maintaining-pro-common-core-position/ )

That brief look at the groups behind the report should help you understand the agenda behind the report. Even the title of the report is designed to be incite a fear tactic. I guess they think the CCSS bandwagon is parked outside our doors, ready to swoop us up and carry us away. Sorry, Foundations for CC, not today, you don’t!

Fib-o-Meter, Take One:
One of the first sentences from the Strain that we’ll pull through the Fib-o-Meter is this one,

‘fierce battle looming between the needs of public health care and education’ I have a question for you..did you know we have a fierce battle between the two topics?? I didn’t think we did. I mean we know both are important issues BUT a battle?? This one gets a ‘Total Fallacy’ just for the appeal to fear logic. What IS “Total Truth” about healthcare and education IS that via CCSS they are united. It’s hard to have a fierce battle when you’re on the same team, now isn’t it? Dr. Duke Pesta and Mary Black do an excellent job of tying the two together in the presentation from Freedom Education Project

Here’s the next sentence the Fib-o-Meter will measure:
‘A crisis is fast approaching that makes comprehensive improvement of America’s public schools more important than ever.’  Yes, another statement that forecasts dire doom for us all IF we don’t reform, reform! “Total Fallacy” for the appeal to fear (again). A related “Total Fallacy” that has been misrepresented AND exposed is the jobs for those graduates who will be caring for an aging population. “Restore the GED Fairness” has at least 2 great articles about HOW we’ve been mislead with those U.S. Dept. of Labor unemployment numbers. (it creates the illusion we’re worse off as a nation than we truly are). Here’s one of the articles,  http://restoregedfairness.org/latest-news/32-common-core-and-the-pearson-vue-ged-an-economic-con-job From their “Latest News” page, this graphic:

Census Bureau data..yes, all that data. What’s worthy of the Fib-o-Meter is that this report relies so heavily on data presented as hard evidence for reform, reform and more reform! Think about it. Our last US Census was 2012. Those numbers were hit with tons of controversy over their factual existence. So, suddenly I’m to trust the data from the Census because it was in this report?! (see: http://nypost.com/2013/11/18/census-faked-2012-election-jobs-report/)

So (and I’m guessing here) that by the report using 2010 data in their large printed paragraphs and blurbs to get your attention is to help you feel better about the 2012 data NOT being used. But then, the report says it’s using other years of data to..all to make the ‘facts’ and ‘figures’ add up to their agenda.

On page 17, 2005’s data is introduced. Here’s an excerpt,  “The 2005 Census Interim Projection forecasts an increase in population ages 5-17 of 8.4 million and 11.3 million for ages under 18 between 2010 and 2030. The more recent Census Bureau 2012 National Population Projection forecasts that the country will gain more than 4.6 million residents age 5 to 17 and 5.4 million age under 18 during that same time period.”

The Fib-o-Meter doesn’t take kindly to smoke and mirrors, fact twisting, or the like. The point of the “Fallacy” by the data is simply this: your most recent past figures should be the ones used, not bits and pieces from several years and then continuing to feature only one year as your ‘projection base’ (ie: 2010 figures projected to the year 2030)

Read this excerpt: ‘Regardless of which of these projections ultimately proves more accurate, millions more students will be hitting American classrooms. Given the challenges looming with the elderly, it seems safe to say that K-12 education faces huge challenges as well.’

From this point in the report, the rhetoric shifts a bit to the massive amount of state debt we’ll see surrounding education spending. Add to that all the elder care money, and we’re all sailing down the creek without our proverbial paddle. The “Total Truth” of this excerpt is yes, many students will be in American classrooms. Does that mean it has to be the CCSS classroom, though?? NO! Again, more ‘Total Truth’ about Common Core, there are several U.S. Federal Agencies hooked into the Core, the top three: U.S. Dept. of Education; U.S. Dept. of Labor AND the U.S. Dept. of Health and Human Services!! Of course they findings, reports, and resources all point to the ‘fierce battle’! If these departments can divide us in a false battle, we’ll be easier to be distracted about what’s going on. We must be attentive in our fight against Common Core. Don’t just take one side’s information and assume it stops there!

As if, by now, you haven’t had enough Fib-o-Meter detecting, I’ll leave the rest of the report for you to dive into. Note though, that it’s from the above points to the conclusion that the mindset you are to glean is one of ‘we must act now’! How do they try to sell it? Minds-are-horrible-to-waste, our-system-is-flat-lined-in-education, our-global-competition-game-needs-some-moxy, we-must-rely-on-the-twisted-NAEP-scale-to-measure-our-schools, and more. “Total Fallacy” enough to keep your Fib-o-Meter churning for hours.

The download: ExcelinEd-FaceTheStrain-Ladner-Jan2015-FullReport-FINAL2
For further research:
Here’s a related one tying the U.S. Dept of Health/Human Services to CCSS:
https://www.commoncorediva.com/2014/12/14/rmt-sunday-beware-of-project-aware/

Here’s a related one tying the U.S. Dept of Labor, as well as state level departments to CCSS: https://www.commoncorediva.com/2014/11/06/tech-thursday-workforce-commissions-education-and-common-core/

Here’s a related one I wrote tying the Vice President to the Workforce that’s CC aligned and is designed to ‘bring on jobs’:
https://www.commoncorediva.com/2014/11/02/rmt-sunday-vp-common-core-and-jobs/

As we shut down the Fib-o-Meter for another week, please know that I do understand we have many problems in America that do need serious attention. Education is at the top of the list. Certainly caring for our families is of even more importance than education. At least from my backyard view, it is. However, I cannot understand how aligning all that we do and all of whom we are is the sensible solution. We must remember that CCSS is a violation of our U.S. Constitution! We must realize our federal government has already so grossly abused its power in BOTH healthcare and education that the fierce battle isn’t between education and healthcare, it’s between a country and her people. It’s us against Common Core. The battle IS there, the warriors ARE here, but let’s be frank Foundations who created this report: you didn’t speak the truth about WHERE the battle lies! So, they want to turn the tide to CC, we can turn the tide AGAINST CC!