As a Common Core warrior, it is important to state that education reform in the realm of the CC Standards finds us uncovering alignment from all angles. No matter if it is directed toward the students, teachers, administration, or other areas in education, there is always something there which points (either very subtly or very glaringly) us back to the CCSS Machine. My example today is the new “Digital Promise”/“Getting Smart” Education ‘white paper’. Below is a screen shot from the paper, be sure to enlarge it to see more and to find out where you can download it for free. As a CCSS warrior, you’ll need it. In the event you cannot enlarge the shot, here’s the website address: http://cdno3.gettingsmart.com/wp-content/uploads/2015/05/Preparing-Leaders-for-Deeper-Learning-FINAL.pdf 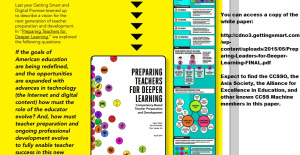 Not only will you find the Asia Society, the Chief Council of State School Officers (CCSSO), the Alliance for Excellence in Education, named in the white paper, but the Bush Society, the New Leaders, and the updated educational leaders standards from the ISLLC (Interstate School Leadership Licensure Consortium). The two of the main organizations presenting the 2015  ISLLC Standards  are the CCSSO and the NPBEA (National Policy Board for Educational Administration). I was able to find the 2014 CCSSO ISLLC Public Comment report (which I’ve provided for you). Why go back to that report? In the introductory pages, you’ll find a list of other organizations involved in educational leadership alignment. (For example, AIR (the American Institute of Research), the NGA (National Governors Association, as in the other 1/2 owner of CCSS copyrights) You’ll also be able to access the sentences surrounding the fact that these aligned, updated educational leader standards are for “45 states and the District  of Columbia”.
See: Draft 2014 ISLLC Standards 09102014

The ISLLC has a set of 6 Standards for educational leaders. Many websites and publications have them listed for your informational purposes. One site, which I’m providing not only has them in a concise form, but also has a live link back to the CCSSO you may wish to follow. That embedded live link goes to the CCSSO’s resource page where you can access the original 1996 Educator Standards. See: http://schoolbriefing.com/isllc-standards/

Should you wish to explore the evidence I’ve found (as have other anti CCSS warriors) about ASCD’s involvement with Gates/CCSS, I’ve provided my set of articles in one link for you: https://www.commoncorediva.com/?s=ASCD (*NOTE: as always, in each of my articles I supply the links, documents, and resources so you can read, study, and discern for yourselves.)

To access another anti CCSS warrior and her findings:
LadyLiberty1885’s ASCD article: http://ladyliberty1885.com/2014/11/12/common-core-aligned-itunes-apps/

“Digital Promise” is another portion of the CCSS Machine. It also can be found by another name:  ‘National Center for Research in Advanced Information and Digital Technologies’. What’s noteworthy is the under the NCRAIDT name, you can learn it originated as part of the non profit entities of the U.S. federal government. Straight from the DP’s website history page:

“Digital Promise is an independent, bipartisan nonprofit, authorized by Congress in 2008 as the National Center for Research in Advanced Information and Digital Technologies through Section 802 of the Higher Education Opportunity Act, signed into law by President George W. Bush.

With an initial Board of Directors recommended by Members of Congress and appointed by Secretary of Education Arne Duncan, President Barack Obama formally launched Digital Promise in September 2011. Startup support came from the U.S. Department of Education, Carnegie Corporation of New York, William and Flora Hewlett Foundation, and Bill & Melinda Gates Foundation.”

First, if you’ve not been able to see the connections between the 2015 ISLLC Standards for Educators and the pro CCSS groups involved, please go back and re-read this. While you probably won’t see any of the documents spell out “Common Core State Standards”, you can easily identify the known groups, people, and agenda of CCSS. Remember, many of the pro CCSS buzzwords/phrases are rich in these documents.

Third, share this with an educational leader. Talk with them. What are they experiencing? Is there are way we can reach out to them and help them NOT to become aligned to Common Core and its mission?