For the final installment of the STEM to STEAM, Ties to Common Core article, we’ll look at just how far back this all started and contrast it with the headlines of our modern education reform.

If you click on the above graphic, how many of you will be able to spot the 16 Career Clusters that are the fiber of Career and Technical  Education? This is just one of the ways CCSS is interwoven into STEM and now STEAM. In the past two portions of this special report for your battle against CCSS, you’ve been provided with FACTS, not fallacies about STEM, STEAM, and Common Core. Make no mistake, those seeking to overall education in America, have wasted no time, energy, or resource to do it. That we, the warriors, are finding the evidence to expose the overreach, is worth sharing. It is only then that we can fight this battle with TRUTH, not assumptions. We’ll pick our STEM to STEAM report up with where I left you yesterday: that the STEAM movement isn’t new at all.

If you recall that PCAST report featured in Part 1 also had a 2010 publication date. In Part 2, we saw that 2014 was a year for the STEM to STEAM movement to be announced. So, what happened in between the PCAST (STEM is embedded into CCSS) and the Washington, D.C. briefing you saw in Part 2?

From a June 2010 “Arts and Education” presentation, given by private businessman (Harvey P. White), the following summary was shared on slide #12 of his Power Point Presentation. (*Note: Mr. White was not an educator):
“We all agree that the USA must innovate to remain one of the world’s leading economies. We must equip ourselves with the best and most complete set of skills to be competitive. A continued high degree of competency in science, technology, engineering and mathematics is an essential element of such a set of skills. We will find increasing competition in this arena and we need to reinstate a level of creativity to augment this technical competency that has been lost by budget concerns. We need to create a national understanding this loss will become a huge economic mistake, especially as our ability to compete in the manufacturing and many service sectors declines. We must lead the effort to make sure there is an understanding that including the Arts in the curricula of all schools at all levels in not just a nice thing to do but an economic necessity. For the future of our nation and to maintain the prosperity and current life style for the generations to follow us we need to act now.”  Who is Mr. Harvey P. White? Great question. He’s a CEO of a corporation named (SHW)2 Enterprises. If that doesn’t ring a bell, that’s okay, I didn’t recognize it either. However, what you need to know is it’s an independent business consulting firm. Mr. White also serves on several technology company boards, helps digital technology start ups, and more. To see his biography, http://steam-notstem.com/about/biography/
(*Note: when you read Mr. White’s bio, be sure to notice the comment section. Note the number of pro STEM to STEAM efforts, the pro CCSS groups, and the dates of publication.)
I encourage you to see his entire presentation. In it you’ll find many more politically driven agenda points about education reform. See: Arts-and-Education-FULL-WEBINAR

In 2011, A Congressional Resolution:

While not successful in passing, the U.S.Congress did entertain a STEM to STEAM resolution. June 21st, H. Resolution 319. The Rhode Island School of Design worked with the Congress member on this resolution. (more about them in a bit) See: https://www.govtrack.us/congress/bills/112/hres319/text
(*Note: be sure to note where art was to be inserted into STEM..via the ESEA (Elementary and Secondary Education Act)

A report prepared for Congress details STEM funding. It’s an in-depth analysis. In the introductory pages you’ll read how Congress has been interested in STEM since the very first Congress; how vital STEM is to our workforce. Sounds familiar, right? Well, here’s a new one for you. In this report, we need STEM so our national security can remain instrumental. You’ll also learn that because STEM is such a key to the nation, it’s now a priority. So much so, that billions of dollars have been devoted to it. Over 250 STEM or STEM related entities spread across 13 different federal agencies. Of those 13, 3 share the bulk of STEM items. (The U.S. Dept. of Ed, the Dept. of Health and Human Services, and the National Science Foundation). This report will detail how and where funding for anything STEM related has been inserted. See: STEManalysis

Not content to let STEM or the insertion of the Arts into the aligned mix, a new resolution was introduced in Congress. Be sure to note which Congress members were involved this time. The name of one of them was featured in the You Tube video provided in Part 2 of this series. Compare this Resolution H 51 to the H319. What differences do you see?
Refer to: http://thomas.loc.gov/cgi-bin/query/z?c113:H.RES.51: Involved again in this new effort? The Rhode Island School of Design. While the Rhode Island School of Design is credited with championing The STEM to STEAM Initiative, they aren’t the creators of STEAM. (Here’s an excerpt from their website:
“STEM to STEAM is a RISD-led initiative to add Art and Design to the national agenda of STEM (Science, Technology, Engineering, Math) education and research in America. STEM + Art = STEAM. The goal is to foster the true innovation that comes with combining the mind of a scientist or technologist with that of an artist or designer.” Contrast that with the STEM to STEAM Caucus (created in 2013) See: http://stemtosteam.org/events/congressional-steam-caucus/

A Step Back to the STEAM’s Beginning:

So, we know STEM has been around a long time. We know the NSF has the bulk of control and power in anything STEM related.  We know the modern push to embed STEM into our daily lives was found in that 2010 document from Part 1 of this series. We’ve been able to connect everything back to Common Core EXCEPT STEAM, or have we? So far, we’ve not known much about its origin. Allow me to introduce a much celebrated educator who is receiving credit for STEAM’s inception.

A lady by the name of Georgette Yakman is receiving credit for her educational framework. That’s her brightly colored triangle you see above. Ms. Yakman’s research took place at Virginia Tech. Her STEAM framework was implemented in 2007. In 2013, she wrote a paper and published which directly ties STEAM to Common Core. In the paper, a PreK to grad school (aka: P20) STEAM plan is laid out. Here’s an excerpt, “STEAM is proving successful in schools all around the world to better teach academic and life skills in a standards-backed, realistic-based, personally relevant exploratory learning environment. It is adaptable, strong, benchmarked, measurable, and reinforces NCLB and state standards and integrates with the Common Core in unique and engaging ways.”  You’ll find out even more when you read the rest of her paper.
See: http://steam-notstem.com/about/biography/
(*Note: STEAM was introduced in S.Korea due to the similarities between the US and itself in education, economy, and skilled workforce. See below for a connection you knew would pop up sooner or later.) 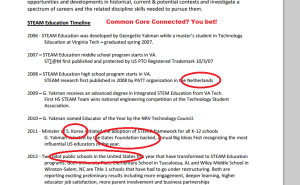 To access the study for STEAM in S. Korea, visit:
http://www.academia.edu/7801783/Exploring_the_Exemplary_STEAM_Education_in_the_U.S._as_a_Practical_Educational_Framework_for_Korea_INTRODUCTION

Related Resources:
A short 2014 clip about STEAM from a U.S. Congress member speaking to guests of Qualcomm and others (Qualcomm is connected to Mr. White, the same man from the beginning of this 3rd portion)

A promoter of STEAM, the “Right Brain Initiative” also is tied to Common Core (there are many, many others as well. The reason I point you to this one is it is one of the promoters not only tied to CCSS, but to P21 (The Partnership for 21st Century Skills).

I found the above (and some of the other information in this portion of the article) on http://3dprintingindustry.com/2014/04/24/steam-3d-printing/

I’d like to thank you for hanging with me through all the twists and turns this 3 part expose has taken us. There is much within these 3 portions to use in learning more about the ties between STEM, STEAM, and Common Core. There is much to share, especially with our legislators at the state level. If you’re desiring an education without CCSS involved, you now know to look at state funding for STEM, STEAM items. You can connect the dots in line item budgets. Ridding ourselves of Common Core means we must address ALL the places it is hiding. I hope you’ve found all this information to be helpful.