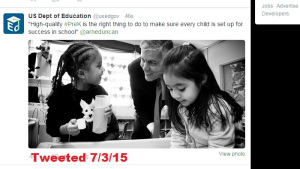 Anti CCSS Warriors, just in time for the 4th of July, the latest ‘Zero to 3 State Baby Facts’ for each of the 50 states are out. So be ready to ‘rumble’!

The National Center for Infants, Toddlers, and Families:

Their mission statement per the above website address is, “ZERO TO THREE is a national, nonprofit organization that provides parents, professionals and policymakers the knowledge and know-how to nurture early development.”

In Anti CC Warrior terms, the above means social and emotional learning, development, and the like are included. It means lots of policy makers and educational decisions are also being made. The Zero to Three Center is also connected to ‘Early Head Start’ (which is a community based, federally funded program). Between the two entities, all 50 states are serviced via over 740 programs. Home visitations are among these services.

From the Zero/Three’s FAQ page:
“What is the relationship between the EHS National Resource Center and ZERO TO THREE?
The Early Head Start National Resource Center (EHS NRC) was created in 1995 by the Head Start Bureau and the Administration for Children and Families. Since its inception, the EHS NRC center has been operated by ZERO TO THREE in Washington, DC. The EHS NRC is a storehouse of early childhood expertise that promotes the building of new knowledge and the sharing of information. See the EHS NRC ‘About Us’ section or email ehsnrcinfo@zerotothree.org.

How many programs does Early Head Start include?
Early Head Start, a federally funded community-based program for low-income pregnant women and families with infants and toddlers up to age 3, has 745 programs in all 50 states, the District of Columbia and Puerto Rico. The program served nearly 62,000 children in 2004. For more information, please see the Office of Head Start Statistical Fact Sheets.

The National Center’s  funding appears to be a mixed bag of public/private funders.  The website, Charity Navigator states that the Zero to Three National Center receives over 70% of its funding from the U.S. Federal Government. (see: http://www.charitynavigator.org/index.cfm?bay=search.summary&orgid=6562#.VZcYl_lViko) *NOTE: scroll down to the “Charts” graphics.

Another example of the private donations, is the one from the Bill and Melinda Gates Foundation. See the screen shot below (the website address is included).

To understand the levels of the varied federal funds the Center receives, access their website page, http://www.zerotothree.org/public-policy/federal-policy/tracking-federal-child-care.html
This is important because you’ll see that part of the IDEA funds are used for Zero to Three; Promise Neighborhoods, and other trails that can lead you right back to the Dept. of Education and Common Core.

I was able to locate the 2008 Zero to Three Annual Report’s list of donors. Among them are the Foundation for Excellence in Education (Jeb Bush’s pro CCSS organization), several U.S. Federal levels offices tied to the CCSS Machine in some way, The Casey Foundation, MetLife Insurance*, The Duke Foundation, and many others. See the screen shot below. For the entire report, use the website address provided beneath the screen shot.

Contrast the 2008 information above with the most recent ‘Partners Fact Sheet” and it will reveal what the Center looks for in its partners and much more. We, as warriors against early childhood CCSS need to know these details, especially in light of the fact that both the House’s and Senate’s versions of the ESEA are up for votes in the coming days. One example from the most recent fact sheet is that  Congress gave the Early Head Start around $500 million dollars in 2014. Access to the Fact Sheet: ehs-child-care-partnerships-fact-sheet-ztt-04-04-2014

Curriculum for the Little Ones Ages 3 and Under:

A sad reality in today’s CCSS aligned world. I’m including a report where you can find out much more about HOW the curriculum for zero to three years old children is supposed to work. What’s important for the Anti CCSS Warriors to note is that while you won’t see the CCSS name used, you’ll see it’s familiar footprint in the language coupled with the reality of the PreK curriculum MUST align to the Kindergarten Standards in your state. See: multidisciplinary-consultant-module-3
Here’s a brief excerpt for you, “Curriculum for babies?” The answer is “Yes.” The development that occurs from birth to 3 years lays the foundation for all later learning (National Research Council and Institute of Medicine, 2000). To ensure an effective foundation for later development and success, infant/toddler experiences should be designed to meet the individual needs of each child.”

An online School Readiness tool is made available to you on the Zero to Three’s website courtesy of MetLife.
See: http://www.zerotothree.org/early-care-education/school-readiness-interactive-birth-to-3/

My warrior’s heart is spurned at the experts who endorsed this report. To see the entire report: gettingreadyforschoolbeginsatbirth

Just the Facts, Mom and Dad:

Before I share the 2015 State Baby Facts with you, I’d like you to see the picture below. The words you’ll see in red are mine (based on my extensive research into CCSS and CTE). If ever one picture was worth 1,000 words, this would be it. 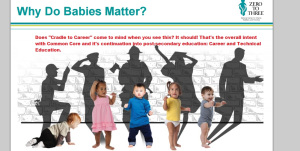 What you, as a CCSS warrior needs to know, is that early childhood care is going to be used (or is already being used) for school readiness. This intent is in the 2015 report.

Back in 2014, the U.S. Dept. of Ed announced the Preschool Development Grant ‘winners’ and updated information for those Race to the Top States which had already been able to acheive ‘robust’ Preschools.
See: http://www.ed.gov/news/press-releases/18-states-awarded-new-preschool-development-grants-increase-access-high-quality-preschool-programs

So what was Duncan’s tweet about? (the very first screen shot you saw). Pushing the need for ‘high quality’ Preschools. When I searched the related links from the tweet, I found this one from MA (Massachusetts) urging parents to sign up to support the PreK Initiative. The Initiative’s issue? Narrowing the achievement gap (they go into a much more lengthy explanation). See: http://prek4ma.org/atstake

The NIEER (National Institute for Early Education Reserach), http://nieer.org/
While this National center is all about their public policies and research, get a look at what organizations are funding this Institute, found in their “vision” section:
“Past and current supporters of research performed by NIEER include: The Pew Charitable Trusts, Carnegie Corporation of New York, The Fund for New Jersey, Geraldine R. Dodge Foundation, The David and Lucile Packard Foundation, The Prudential Foundation, The Schumann Fund for New Jersey, Smith Richardson Foundation, Tulsa Community Foundation, and the U.S. Department of Education’s Office of Educational Research and Improvement (OERI).  NIEER also leads the Center on Enhancing Early Learning Outcomes (CEELO), one of 22 comprehensive centers funded by the U.S. Department of Education’s Office of Elementary and Secondary Education to strengthen the capacity of State Education Agencies to lead sustained improvements in early learning opportunities and outcomes.”

What you, the anti CCSS warrior needs to know about the NIEER? The 50 states want to be able to adhere to this body’s parameters. For example, see NC’s statement of ‘bragging rights’:
“North Carolina is one of four states with a Pre-K program that meets all 10 National Institute of Early Education ResearchBenchmarks (NIEER).  Benchmarks include comprehensive Early Learning Standards; staff met education/licensure requirements, professional development; 1:9 staff/child ratio; developmental screens and referral; evidence-based curriculum and formative assessments; monitoring and nutritional requirements.”

If you’d like to see just WHAT those “stellar” NC PreK Standards are, NC_Foundations
The Common Core State Standards tie to the “NC Foundations” can be found on page 17 of the document.

Warriors against CCSS, you know that usually on Saturday I’ve got action steps laid out for you. However, I think you can see what actions you need to take with this issue. Knock ’em down. I know I will do my gut level best!

2015-07-04
Previous Post: Freedom Friday: CCSS Warrior Reminders
Next Post: RMT: The Other Side of the ESEA Battle?!