Anti CCSS/ESSA Warriors, a few hours ago, the U.S. House of Representatives’ Education/Workforce Committee hearing wrapped up. In the ‘feature’ picture you see above, it’s an explanation of the Article 1, Section 1 of the U.S. Constitution.

As expected, the Hearing WAS a ‘dog and pony show’, of sorts. There were ‘expert witnesses’ alright, there were supposedly ‘angered’ Representatives, too. What was missing was the usual hand picked ‘successful’ citizens backing up this latest episode of “We Love the ESSA (Every Student Succeeds Act) Show”. The entire Hearing is below.

“Nothing But the Truth”:

As a Warrior Against Fed Ed and as a citizen of the United States, we know this phrase is one that is most serious. If you’ve already listened to the Hearing, you will note that each of the 4 witnesses had to recite this pledge. I’ll side track myself for a moment to say that each of our Representatives ALSO made a pledge of similar sorts when they took office.
Those words are : 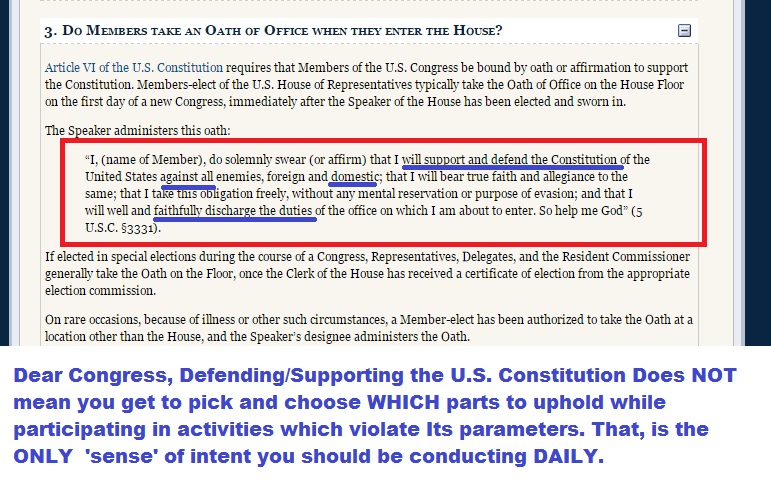 Maybe, we Warriors should demand they take this oath every day they serve, rather than just after their election. I think it would leave NO question in their minds as to what their ‘sense’ of  leadership should be. I feel we really should demand something drastic from our Congress members. They clearly are NOT upholding their jobs.

Some Objective Truths to Balance Those Subjective Ones:

During the Hearing I took lots of notes. Below are just a few. Subjective truth is italicized. Objective is in bold type.

During the Opening Statements,
1) Proposed ESSA Regulations, especially for Title One funding are ‘unlawful and must be investigated’.  The original press release stated this Hearing was to center around supplementing and supplanting funding in the ESSA, with a focus on two areas: a) Title 3 funding (used in post-secondary education) and regulatory fiat (whatever it takes to make the Regulations happen.) This hearing did NOT discuss Title 3 funds NOR did it clearly state what needed to be done to make the ESSA Regulations so.

What the Hearing did do was point fingers at each other in Congress; lay blame on the U.S. Dept. of Education, label those opposed to ESSA and/or the Proposed Regulations as ‘disingenuous’. While the supplement/supplant discussion DID go on to some extent,  is was absolutely awful HOW the exchange went.

2) ESSA was a truly bipartisan effort that the U.S. President signed. Clearly sending a message to the people of  united authority. Now, the U.S. Dept. of Education is interfering with that authority. IF (and I say this with all the gumption I possess) the U.S. Congress had read their copy of the U.S. Constitution, as well as the U.S. President, they would recognize their authority is limited, not absolute! IF (and again, with gumption) the U.S. Congress had taken the time to read ESSA, they would know the U.S. Dept. of Education’s Secretary was  given increased power.

In fact, in the early pages of the ESSA, the language reads that Dr. King, as Secretary of Education, is the one in charge of an orderly transition nationwide in the implementation of ESSA. However, that I know of, no CONGRESS member read the ESSA before they voted on it! There was not physically enough time. It was another ‘wham-bam, thank you ma’am’ piece of illegally based legislation.

3) ESSA must be carried out as it was written. This Hearing is to protect families and students. The supporting evidence shown around this time was from Section 1118(b) (2), not from the ESSA bill or law, but from its FORMER version when it was a Senate specific Bill without the House’s compromise!  IT (ESSA) was written as its being carried out!

The States control, flexibility, the choices..all well written fallacies. Those who wrote the ‘bipartisan’ Law should know this. As far as protecting? If the families and students were underneath the seats of the Committee today, they were successful. Otherwise the only protection afforded was to each Committee member’s backside. 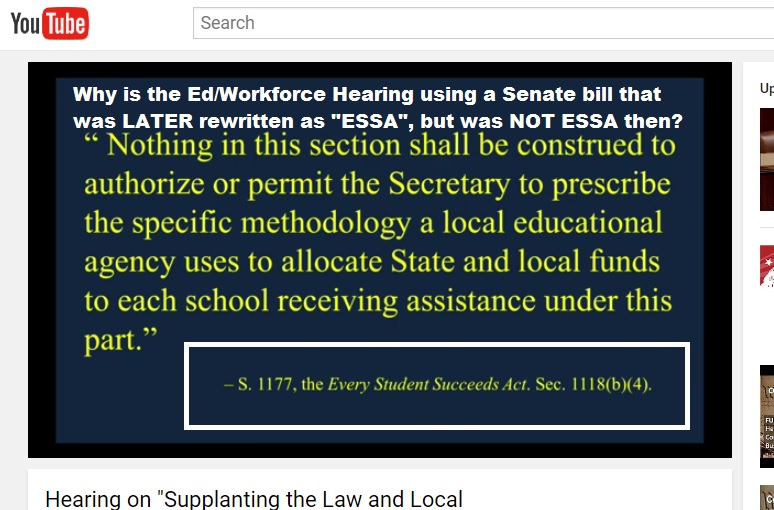 How many people do you think will see the point Congress is trying to be make? That the U.S. Dept. of Ed is in violation, especially its leader. When using evidence which is NOT truly from ESSA, but a former version of itself?!
More than likely the CCSS Machine will only show that the Sec. of Education is over-stepping. It will not show Congress as not being responsible in any way.

Congress is being very sloppy here. Yes, they should rein in Dr. King. But then, they should not have allowed his confirmation. They should know the Constitution and their oath of office demands they not allow any federal overreach in education.

4) CTE (Career Technical Education), Vocational Tech, Advanced Placement, Magnet Schools, Education Savings Accounts, and College/Career Readiness(CCR( all need not only MORE money to give education equity, but we must ramp up these options while creating ones to compliment them.
Congress has proven, by their own words, that not only do they NOT know WHY ESSA’s imploding before their eyes, but, that they are SO clueless about education they are professing they do NOT know their own districts. Yet the ‘obvious solution’ is MORE taxpayer money for CCSS Machine education.

Warriors, this is by NO means all I could share from the Hearing today, but I want to leave you with this. When you see/hear Congress members asking ‘supposed’ experts what Congress’s  job is, it should be a huge warning sign to us all.

Look for more information about the most recent Congressional moves coming in the next few days. We must be alert! We must make concerted moves to dispel these ‘subjective truths’ being sold as facts. Why? Given the tones of the most recent Ed/Workforce Press Releases, the goal of Congress appears to be criticize and level the U.S. Dept. of Ed’s power and use that power as their own.

As the Hearing went on, the competency based, career readiness rhetoric increased. At the end of the day, when you put the issues of Title One, equity, and all else in the Hearing aside.
It is my belief that the supposed anger directed to the U.S. Dept. of Education is a ruse. Shifting the blame, posing as  education’s savior (especially when you claim you are clueless), and suggesting money is the only solution shows Ed/Workforce wasn’t truly about ‘whatever it takes’, but ‘whomever to blame besides us’  today.

Either way it’s spun federal supplanting or supplementing of education funds is illegal.