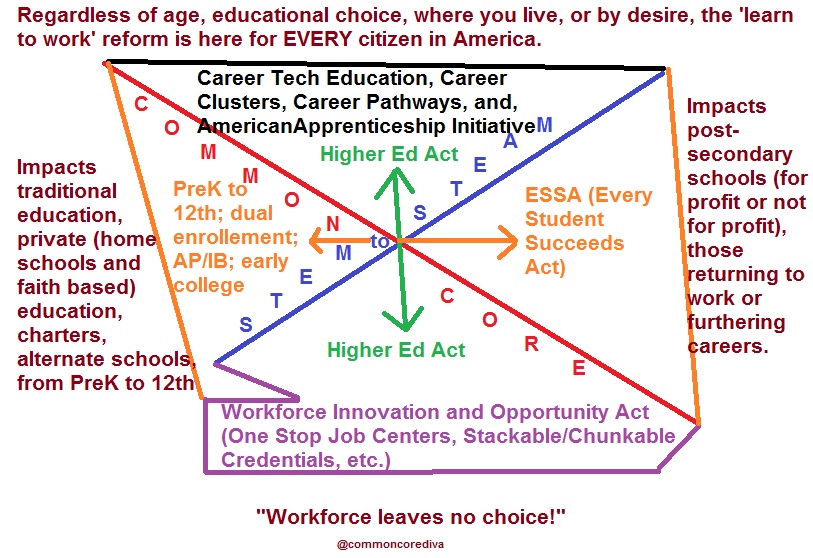 Thanks to a dedicated anti CCSS Warrior, I was pointed to the Morning News by Politico.
Link: http://www.politico.com/tipsheets/morning-education/2016/09/career-education-bill-breaks-down-in-senate-216421

While this is a temporary victory, we need to remember the source: Sen. Alexander.

*Cheerleader for ESSA
*Caught on public record stating alignment for HEA (Higher Ed Act) was next after ESSA became law, and supported by many CTE (Career Tech Ed special interest groups).
*He also knows full well that Perkins Funds (used for CTE) are federal level and given to the States.
*Alexander surely knows all this and much more. He helped write these laws! He’s also a huge key player in birth to grave alignment (that infamous late 80s speech is proof).

From Alexander’s ragging on/raging on this morning:

*We now know the Senate HELP was set to hear ‘discussion’ on S3271, The Workforce Advance Act. The ‘sister’ bill to HR5587, Strengthening Career Tech Education in the 21st Century. 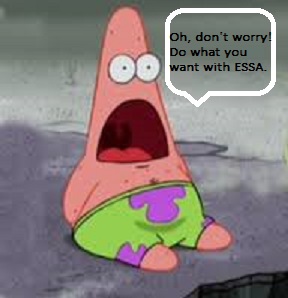 How Both tie to ESSA (Every Student Succeeds Act):

* ESSA ties those funds to not only post-secondary readiness, but student enrollment numbers for those ages 5 to 17 years old.
* ESSA also ties the Perkins funds to education as defined by WIOA (Workforce Innovation and Opportunity Act).
* ESSA also embedded every single shred of the ESEA of 1965, which means NCLB went with it to, ESSA DID NOT fix NCLB!
* ESSA also gives the US Sec. of Ed tremendous increases in his authority. One of which is he is the one to oversee a smooth transition from old ESEA to new ESSA nationwide. Since Perkins funds/CTE are in ESSA, that means King’s got the authority over them in other bills.

The article states, “Democrats are opposed to the new restrictions on the education secretary’s authority, and point out that such measures were not included in the House bill — which cleared that chamber on a 405-5 vote. “Senator Murray has been working with Democrats and Republicans toward a bipartisan bill to reauthorize Perkins CTE, and she is hopeful that this can continue and get done as quickly as possible,” said Murray spokesman Eli Zupnick.”

“ the bill would allow the Department of Education to use national CTE activities to help identify successful methods and best practices for providing dual or concurrent enrollment programs and early college high school career and technical education opportunities.” See:
https://www.commoncorediva.com/2016/08/09/congress-loves-cte/

While in the text of S3271 you do not see Dr. King’s shift from determining ‘appropriate’ CTE  to ‘necessary’ CTE; you do see he has total rein over dual enrollment, concurrent enrollment, Perkins Funds, all the Title funds involved in CTE, early college high schools, apprenticeship programs, as well as the backing of the National Assoc. for CTE, see their crosswalk document for aligning ESSA and WIOA.

You’ll also want to see this little gem from the Congress.gov website about S3271, “Official Titles as Introduced: A bill to amend the Carl D. Perkins Career and Technical Education Act of 2006 regarding dual or concurrent enrollment programs and early college high schools.”

, while it is a sigh of relief for WHATEVER reason Alexander pulled his stunt this morning, it goes without saying that we MUST brace ourselves.

We’ve been able to see right through the smoke and mirror, pro CCSS Machine chatter from D.C., especially from Senators Alexander and Murray. Remember, they BOTH led the nation to ESSA as law. BUT, they were hardly alone.

We know the HELP Committee isn’t done. There are 2 OTHER CTE Bills remaining in their  hands: S3190 (CTE for Rural Health Care; ties Obama Care to CTE), and S3174 (LADDER Act; creates a national workforce council in the Executive Branch of the government).
Oh, and by the way, Dr. John King, as US Sec. of Ed (0r his appointee) is to be among the council members). 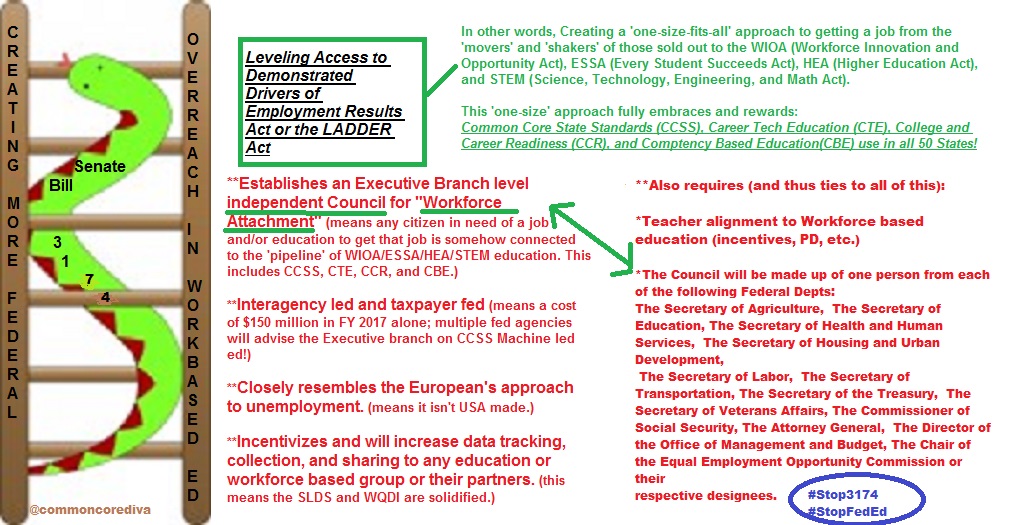 Knowing Fiscal 2016 is winding down, it is truly important we keep tuned to Congress. Especially on the LADDER Act. Why? As I previously researched, published, and have spoken out about, the LADDER funds are ALREADY set aside for Fiscal Years 2017 to 2026. It wouldn’t surprise me at all that Alexander purposefully is taking S3271 off the immediate action table (especially since the House threw the nation under the CCSS Machine 405-5) and put S3174 in its place.

The House’s Ed/Workforce Committee hearing for 10 am on ESSA Title 3 Regulatory Fiat, appears to still be on schedule for 9/21.  Link: http://edworkforce.house.gov/calendar/eventsingle.aspx?EventID=401015