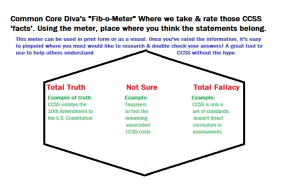 Okay, it’s Friday again, which means it’s time to break out the “Fib-o-meter”!! This week’s list of statements for you to rate and/or use when helping others learn more about Common Core is below. Like last week, after reading each ‘fact’ or ‘fib’, plot in on the Meter in the place you think it belongs! When you’re through (and only then) scroll down to the answers and see how you did!! Good luck.

Be sure you use these facts/fibs in your circles of influence to help spread the word why CCS needs to go!

1) Common Core Standards is the zenith of education reform.

3) Common Core Standards main goal is a quality based education.

4) One argument the pro CC side uses is ‘throwing away money & wasting time’.

5) Common Core allows teachers the freedom to teach their disciplined area of expertise.

6) The CC Standards themselves do not amass data on students, Race to the Top funding amasses it.

7) HR5 (The Student Success Act) is currently stalled in Washington & is key to reforming much of the CCS.

10) Action steps I can take as a concerned parent or citizen include meeting with others.

Answers:  All of today’s facts/fibs are from the recent Family Research Council webinar from earlier this week. I’ll give you the link at the end of the post. It is well worth sharing.

1) Total fallacy..Common Core Standards are a huge step in the direction of 100% fed led ed, but it’s not the zenith. This is according to Dr. Neal McCluskey with the Cato Institute. He went on to state that he believes the zenith is not far away in the future. My researched guess…STEM will be involved somehow.

2) This is totally true, the federal government, did in fact, back during the 1980s tell the states they would become more and more accountable for education results in their states as the years progressed. CCS is the culmination to some of the years between then and now. The final bell hasn’t rung just yet, in other words.

3) Depending on who is taking today’s challenge, this answer could be ‘neutral’. Some, especially those supportive CCS, will say quality education is definitely a goal. However, for our purposes, total fallacy is much more accurate. Jane Robbins, lawyer and with the American Principles Project, explains in her segment of the webinar, that it is in fact, workforce and human capital are the main goals of CCS.

4) Totally true as far as an argument. It’s so over used, it’s a worn out welcome mat at your front door. The reality is the far better point of  saving money and to create ease for the teachers by discontinuing the CCS. Why? The required professional development for teachers will be perpetually on-going. It will be costly and time consuming. Think a teacher who has no time for her/his personal life…at all.

5) Totally fallacy. This has to do with that storied ‘15%’ wiggle room. The stark reality is there won’t be enough time left after teaching the 85% CCS to wiggle, teach or even think. This is one of the classic strawman fallacies of CCS.

6) Totally true. Jane Robbins explained it well. The massive amounts of data in education can be found in the Race to the Top applications and in the federal stimulus money from a few years back. One of the qualifiers, each state must build the exact data centers as each other. This skirts the federal vs. state led argument.

7) Totally true. Congressman Tom Cotton (very opposed to CCS) shared during his portion of the webinar that this bill is stalled and would, indeed, reform a tremendous amount of the current fed led education disaster. He also encourages us to contact our US Congress men and women, especially the Democratic ones to get behind this and pass it.

9) Yes, it absolutely reinforces this concept. As part of ‘human capital’ you won’t need parents.

10) Yes, yes, and, heck yes!! We must gather in person, on-line. The key is informed and active parents, citizens. We are no match for the CCS machine! Want to know how to get involved? Leave me a message or comment. Contact my dear associate, LadyLiberty1885.

Here’s the link to the webinar. Watch it, take notes & let’s chat. Remember, you can find me on Twitter (@commoncorediva), here, or on Facebook (Lynne M Taylor).

http://frc.org/commoncore (the video should begin to play almost immediately)