RMT: Whom Shall We Send?

“Riddle Me This” Sunday, the last one before Thanksgiving 2014. Common Core Standards has had so many of us fighting non-stop this year that we may find we’ve taken little time to focus on much else. I know it’s been hard for me.

However, we’re only as strong as our weakest link. So, today’s riddle is quite simple, “Whom shall we send in our places as we take a much needed rest from battle?”

Classic battle plans have much strategy we can learn from, employ, and see success in our fight against the federal take over of American education. One of my all time favorites, the Roman’s “Testudo” Formation, see below:

Now, I’m not talking about the 3 men uncovered, I’m referring to the unique way the main body is covered. Have we taken the time to arm ourselves with much protective cover in our fight against CCSS? If you’ll notice the right side of the formation is exposed. Typically, when you search for a Roman formation like this, you’ll see all sides protected, much like a turtle. However, I’d like to point out that progress when this tightly compacted will be slow, it is progress. We have to consider our modern day battle much the same.

Pointers from the past:

When fighting battles against Common Core Standards, use these ancient maneuvers,

One vital lesson we can glean from the most recent NC Academic Standards Review Committee is this:

don’t send your freshest or most inexperienced warrior into a major encounter. It will implode quickly and defeat the purpose.

We’re not the only ones considering this a battle:

How often have you heard the supporters of Common Core use the term ‘cohorts’? It’s a military term the Romans used. So are troops, contingent, and corps (think Teach for America’s “Teacher Corps”)

While the supporters may be giant, we have smooth stones, all it takes is one beautifully cast, to bring the giant down. 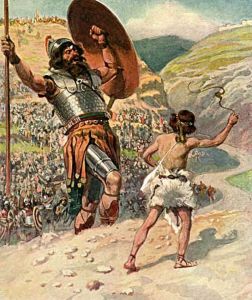 Before I leave you, my anti CC Warriors, know this, we fight together better than we do alone. I’m so glad to be among you and so thankful to know you.