By special request, today’s “Riddle Me This Sunday” post is all about Common Core in Connecticut. So, what’s the riddle? Just when did CCSS start there? CT has a special connection to Common Core. So, let’s delve in, shall we??

A bit of background:

One of my followers lives in CT and has provided me with a bit of inside information regarding our riddle of just when did CT get saddled with CCSS. Here’s is her original query to me, “CT Common Core of Learning, 1998. Coincidence, or in having knowledge that the Dept. Labor and Ed have been working together since the 1990’s, is CT a part of the early movement?”  Since this original riddle, I’ve been asked by my follower if I’ve uncovered any further evidence. Here’s what I first responded, “Hi, after much digging, I was able to connect the joining of labor and education for all of us via the Goals 2000. Specifically for CT, here’s what I found: “Statewide, the education and occupational skills training functions need to become more responsive to the needs of employers and to fluctuations in the labor market. This is both a weakness and a challenge. The CETC is developing an incumbent worker training program to help in this effort. A strategic planning initiative has also been developed to increase the role of higher education in the state’s workforce development system. A partnership between business, higher education and the K-12 system, focusing on demand-driven strategic workforce development planning and implementation, will improve the ability of the system to respond to the high-tech needs of business and industry in Connecticut.” This is from the “Strategic 5 Year State Workforce Investment Plan” published back in 1999, from what I can tell. As far as “CC”, according to Charlotte Iserbyt, it’s a new name for the long string of outcome based education. I hope this helps answer your question. Sorry about the delay.”

Before I get to what else I’ve uncovered, let me point out that my reader’s original question is huge. Why? Look at her date..late 90s. We didn’t see “Common Core” per say until the circa 2009 or 2010. IF CT was an experiment or an original state that would dispel the rhetoric of KY being one of the first, right?? Let’s see if we can solve the riddle!

Anytime you need to question like this and want the facts, it’s a great idea to go to the ‘law’. In this instance, the General Statutes. From the CT General Assembly, Section 10-3a, the Dept. of Education is an Administrative arm of the State Board of Education. An appointed (by the Governor) Commissioner is to “shall administer, coordinate and supervise the activities of the department in accordance with the policies established by the board.”

Okay, so what are the Board’s policies? Section 10-4 tells us that the Board has to have a comprehensive plan for elementary, secondary, career and adult education, and vocational education. Here’s a direct quote from the next portion of the Board’s policies, “general supervision and control of the educational interests of the state, which interests shall include preschool, elementary and secondary education, special education, vocational education and adult education; shall provide leadership and otherwise promote the improvement of education in the state, including research, planning and evaluation and services relating to the provision and use of educational technology, including telecommunications, by school districts; shall prepare such courses of study and publish such curriculum guides including recommendations for textbooks, materials, instructional technological resources and other teaching aids as it determines are necessary to assist school districts to carry out the duties prescribed by law.” Said Board reports to a Standing Joint Committee in the General Assembly and to the Governor.

Okay, so where’s the Common Core?

I did find that the state of CT used a portion of its budget to cover the cost of technology to implement Common Core (Section 7-536), Section 10-14v overhauls the law for the Common Core Reading alignment; Section 10-15h states that beginning in 2013, a pilot implementation of CCSS is to take place, with everything set up by 2018–including higher education. Then in Section 10-221t, even more law about aligning CCSS in higher education to co-ordinate with lower educational institutions. Section 10a-157b lays out the college career readiness must in place by 2016 via curriculum that’s CCSS aligned. (Note: as far as the Career Pathways, Career Ladders, Career Tracks, etc. They are also written into the General Statutes for CT. So is the Workforce…all these are CCSS tied or/and aligned!) What I find interesting is that in each reference, CCSS is all lower cased. I also find it interesting that given the state’s stance on curriculum (preparing, publishing curriculum guides), and knowing how CCSS is copyright owned, that CT can pull this off. Maybe it’s just my way of thinking, but I guess when you buy into ‘it’s not a curriculum, they’re JUST Standards’….

Okay, so the current Statutes have the state of CT covered, but we still aren’t clear on just WHEN CCSS entered the state…let’s press on.

The State of CT’s General Assembly:

Since the Statutes told me only a part of the saga, I wanted to see what the GA would have. After all, the BofE prepares annual reports for them. When I typed in “Common Core Adoption”, I got back some very interesting results. (main website: http://www.cga.ct.gov/) Among the top results was a 2007 documented report. See the image below: 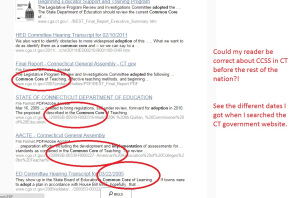 The report’s date from 2007, which I mentioned above, was published in December and was for those beginning to teach in CT. Among the recommendations the Joint Committee adopted was this one, “The State Department of Education should create and implement a collection of sequenced support modules based on the state standards contained in the Connecticut Common Core of Teaching, effective teaching methods, and beginning teachers’ needs, through which mentors will guide their assigned new teachers. Starting no later than the 2009-2010 school year.”  This recommendation wasn’t too far behind one for data collection for mentors. Here’s another quote, “The State Department of Education should review the current Common Core of Teaching Standards to determine if changes or modifications are necessary. Such review and update of the standards should be completed by July 1, 2009, and every seven years thereafter.”

Found on page 12 of the report, “The Common Core of Teaching (CCT) was ultimately adopted by the State Board of Education in 1999.” The CCT, as they call it replaced previous Standards called “Connecticut Teaching Competencies” or CTCs. It’s important to note here that these Standards are for the TEACHERS, not the students.

This Common Core was designed to not only change how the teachers taught, but to also assess them. The report goes on to share that many teachers weren’t use to these new Standards which were created by several different groups who partnered together. Therefore they needed help in carrying them out.
NOTE:   Oddly enough, (and I muster all the sarcasm I can) National Governors Association was involved. (you remember them, right? Half owner of the CCSS?!) From what I can gather all this change was the result of a “Blue Ribbon Study” conducted by the state’s Blue Ribbon Panel. Below is a screen shot from Appendix B of the 2007 report.

To see the entire document (where you’ll be able to have the names of all those involved in creating the CCT, as well as other interesting factors: BEST_Final_Report

This is a key to the modern day Common Core State Standards saga. How do I know? NC (where I live) also had a Blue Ribbon Panel which studied our educational landscape, not long before we were saddled with Common Core. So, let’s see if we can find a connection between the blue and the core.

As per CT law, the Standards are to be reviewed every 7 years. Using the above 2007 report where it referred to the 2006 Five Year Plan, I got curious.

So I’ve included it here. You’ll immediately see why. The opening salvo is so pro CCSS sounding, it’s not funny. “A Superior Education for CT’s 21st Century Learners, 2006-2011.” It was in here I found a nugget of information.  Connecticut Framework: K-12 Curricular Goals and Standards.

Why do I consider this a nugget? Because the Framework is from 1998, just before 1999 Common Core of Teaching emerged. Here’s an excerpt: “Connecticut’s revised Common Core of Learning – to be released later this year – was developed based on the 1987 version. The revised document will incorporate the program goals and content standards verbatim that appear in each of the 10 frameworks. Together, these new curriculum resources – the Common Core, Curriculum Frameworks and Guides to K-12 Program Development – represent the state’s response to the first goal in Connecticut’s Comprehensive Plan for Education/1996-2000: “to set and meet high expectations for academic achievement for all students, in order to prepare them for productive adult life, continuing education and responsible citizenship.” (see the older Framework: ctframe) To see the 2006-2011 Five Year Plan, which details those Outcome Based Education goals Mrs. Iserbyt mentioned (that include things like longitudinal data collection, formative assessments, more rigorous work,  and involving the community into your child’s education), see: comp_plan06-11

May 2010 is when CT applied for Race to the Top funding which included reforming education from Preschool to college (aka P20). From page 26, “Assurance 1: Standards and Assessments Connecticut will adopt both the Common Core State Standards (CCSS) (July 2010) and Common Assessments (once they have been developed and reviewed nationally). We aim to become the 32nd state to adopt College- and Career-Ready Standards and we will also align our K-12 standards to reach preschool and to achieve concordance with college entry requirements.”

I should point out this application was in consideration for Phase 2 funding. The state applied during Phase 1 and was denied. Also worth pointing out in the application is that 2006-2011 Plan from above. The preparer stated the new CCSS would well align to their existing framework. Keep in mind that their at the time framework was geared for  CCT/CCL (Common Core of Teaching/Common Core of Learning).

Is the Riddle Solved?

This is one of those riddles which could be solved very easily IF there were a ‘smoking gun’ of a clue. From the research I’ve presented, it would appear the state of CT was the first with CCSS, but under a different (not much different) name. However, it could be a coincidence with the “Common Core” phrase. As far as I’m concerned just the fact the NGA was involved early on with CT’s education framework, is enough to suggest it is a distinct possibility that CT could have been an early participant, or, maybe worse, an experiment.