Do to overwhelming response to my post today, I’m updating it to include all kinds of the information about Common Core in private, Christian schools. It has been epic in proportion!!!
First up, the original post included 2 photos will you notice are now removed at the request of the family involved. I am hereby rendering a public apology to any one who has been upset. My intent was to help raise awareness about how stealthily schools are implementing Common Core in private schools, Christian OR not.

It’s important to note, there are several parents, across the nation who WANT to get rid of Common Core, BUT like their schools. How you can help Fib-o-Meter Fridays: IF you have an issue you’ve seen in your school, or found something in your fight against CC worth exposing, let me know! We’ll get it out there to help spread awareness, expose the truth, AND give credible evidence to those in charge!!

Before I had a blog of my own, I wrote several guest anti-CCSS posts on another blog. I’ve referred to LadyLiberty1885 several times. She and I met in the fight against Common Core here in NC. For today’s Fib-O-Meter Friday, I’ll be referring to one of my guest posts about how Common Core is in Christian private schools AND share with you some about a mom who’s just discovered how her child’s schools is giving CC to students, yet denying it.

First Up, the original:

Pointers We Need that Contain “Total Truths” about the “Total Fallacy” of CC:

1) CC seeks to render school choice void. While ‘choice’ is teased, look beneath the surface and more than likely CC is there.

2) More schools outside the public realm are choosing to align to the illegally implemented Standards because the fallacy of ‘keeping up with the Joneses’ has been ramped up to include your students futures.

3) National Associations governed by those who a) don’t know the whole story about CC; b) don’t care about the whole story; c) know it, yet use a don’t ask, don’t tell approach. In the original post (above) you’ll find just how the NAs joined to private schools have chosen to act.

4) For home education, many resources are out there ‘riding the fence’. That said, I believe it’s to continue to offer choice. Some homeschoolers seek to follow the mainstream, while others wish to follow their own lesson plans. A wonderful resource I suggest often (includes not only curricula, subjects, but has assessments, too), is the Homeschool Road Map’s Common Core Project by Tina Hollenbeck. To date, this is the only database I know of where things are broken down by ‘aligned to CC’, ‘somewhat’, or ‘independent of CC’.

The mom who contacted me just yesterday about CC in her child’s private Christian school, had this to say, “Hi Lynne, is McGraw-Hill aligned with CC?” My response, “Yes, they are absolutely aligned.” Then “Mom” again, “And what about Harcourt Achieve Inc?” Harcourt, Achieve are 100% into ccss.” Finally from “Mom”, “I thought so. Our son is in a private Christian school too. Haven’t seen any crazy CC math…yet, but have seen 2 papers with unclear instructions. Thanks.”

It was also shared that the leader of the class was contacted about confusing instructions; that the school had been repeatedly asked about the use of Common Core at all in the Christian private school. It was stated CC wouldn’t be an issue. Yet, why is this family, like others across America, receiving CC homeschool, curricula at their child’s private school? (for those answers, scroll back up to see the 4 main points)
I can tell you after, checking out the school’s policy, I noticed at least 3 subjects aligned on purpose to Common Core!! I’m only including information about those 3. I urge you, as a parent who may have students involved in any of these programs to learn more! Get involved and remove ANYTHING CC from your school (private, home, extra curricular, etc.)

The 3 subjects this Christian private school uses with CCSS:

See the screen shot below,

Odyssey of the Mind:

While not in the same region of NC that Winston-Salem is in , I did find the Coastal Region’s OOM Parent guide which contains all the ways Oydessy of the Mind aligns to not only Common Core, but STEM and those 21st Century Learning Skills!! Here’s a screen shot: 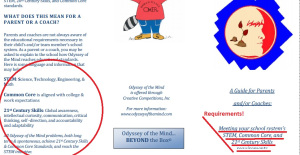 See the rest of the Parents Guide: http://www.odysseyofthemind.com/downloads/stem_parent_brochure.pdf

As far the Language Arts this particular school uses, we already have evidence it’s CC aligned, but here’s a link, http://www.commoncoresolutions.com/

Note: An interesting look at how Accelerated Reading Programs are constructed, taught, and assessed: http://scholarworks.wmich.edu/cgi/viewcontent.cgi?article=1130&context=reading_horizon

From Twitter, the best responses; “How do we get the Gov’t out of state ed?”

From Facebook, the best responses; “That’s what happens when these private schools buy texts from companies using common core. The text supposedly are CC aligned, but also supposedly not all CC. BUT even supposed non-CC lesson have common core in them.”; ” Wow!! I’d be livid!! Everyone I met last year on the private school tours were going there to get away from common core. Can’t imagine a school denying it! How wrong!!”; ” it is frightening because it seems ALL SCHOOLS–private/Christian included are getting on the CCSS bandwagon. They try to pretend they are not when directly asked and then when parents concerned about “accountability” ask–they say “yes we are aligned with the state standards and follow a curricula that enables the students to blah, blah..blah….”; “We’ve looked at many private schools in the area now and there seems to be a definite polarization–the schools for the rich are real “college-prep factories” for high achievers, and a lot of the same CCSS lingo is used but they are actually supporting their students to get there–some more so than others.”; “my daughter came home – 8 year old daughter, with a Judy Blume book today from said, private Christian school. I need heart attack meds.”; ” This is a huge problem because Christian schools often slobber over accreditation committees and generally have an inferiority complex about curriculum and want to be accepted. But even Christian College education departments are often pro Common Core and have no concept of parent anger over it.”; ” Oh my gosh!!! Yes, yes, yes!!! My daughters VERY expensive private school is insisting they are not using common core YET which math book are they using: Every day math with “common core aligned” right on the cover. And still saying they don’t use common core – I can’t understand how they say that with a straight face?”; “Why we must stop common core before it takes the choice out of private schooling, homeschooling and college.”; ” NO! not Odyssey…a very sad day indeed.”; and, finally, ” screw the state!”

From a NY Warrior has granted use of this evidence for not only private schools, but others in NY, click to enlarge: 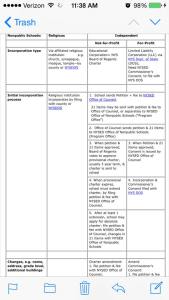 So, as far as the Fib-o-Meter’s stance on Christian private schools and CC, I’d say it’s done a great job of exposing fallacies passed off as ‘nothing to be concerned about’.

Did today’s post stir a Common Core pot? Absolutely, but based on just these FEW comments I’ve shared, I would say it’s a pot that MUST be stirred.

I sincerely thank the parents who contact me in an effort to fight Common Core. That takes plenty of courage. To desire to keep their educational choice as is AND remain CC-Free, is, I believe, their Constitutionally protected privilege. Join me, help parents like this FIGHT Common Core IN ALL Educational Choices!!