In a special edition of my “Fib-o-Meter” Friday, anti CCSS article, I’m taking a look at who’s hyping FOR the reauthorization of HR5 and who’s uncovering the truth behind HR5.

Short title: “Student Success Act”; the long title’s much to long to even bother with. Since I write from the perspective of OPPOSING Common Core and that most of my readers are also fighting to halt CCSS, I’m going to assume you’ve read up on the reasons WHY HR5 is not the Bill it’s pretending to be. However, in case you haven’t:

Supposedly it will give back to the states back local control of education  (“Total Fallacy”) The “Total Truth” is that the bill will continue to mandate what the states must do in education!

States currently receiving federal funding via ESEA (Elementary and Secondary Education Act) waivers will still be just as tied to federal overreach as we are now.

The law is being rewritten under our noses to force the CCSS agenda. That’s a “Total Truth” that needs to be shouted out! Remember, the “Total Truth” that CCSS violates the U.S. Constitution AND at least 3 federal U.S. laws YET Congress is crafting legislation that will continue this illegal activity!

Those Who Are Exposing the Lies of HR5 with “Total Truth”:

Anita Hoge’s article about the loss of parental rights under HR5:
http://abcsofdumbdown.blogspot.com/2015/02/hr-5-denies-parents-their-right-over.html
*Note: this is on Charlotte Iserbyt’s blog. Another outspoken expert on federal overreach in education.

Anita Hoge’s article about the massive mental health aspect of your students under HR5:
http://www.newswithviews.com/Hoge/anita114.htm

“Women on the Wall’s” phone conference call about the 3 tiers of how your students will become Medicaid patients: http://www.voicesempower.com/pre-k-education-medicaid-human-capital-and-the-eseanclb-reauthorization/

“Women on the Wall’s” phone conference call about more dangers we face with the re-upping of ESEA:
https://soundcloud.com/alice-linahan/women-on-the-wall-with-robin-eubanks-and-joan-landes-esea

“Truth in American Education’s” article exposing how assessments, data mining, and more of the same will be our reality IF HR5 is passed!
http://truthinamericaneducation.com/common-core-assessments/action-alert-stop-the-student-success-act-hr-5/

There are many others who’ve also exposed the truth about HR5 (myself included), but due to the nature of this topic, I want you to see the OTHER side’s version (just in case you aren’t aware of the massive snow job the CCSS Machine is pumping out)

Those Hyping the HR5 aka “Total Fallacies”:

Also from Fordham Institute, this illustrated fallacy of how great HR5 is!: 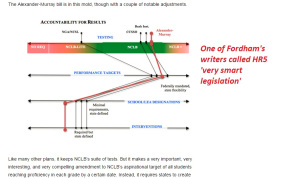 To read the rest of the “Total Fallacy”, see: http://edexcellence.net/articles/the-great-achievements-of-the-every-child-achieves-act

From Senator Alexander via Fordham’s Twitter. Obviously Fordham had a front row seat at the hearing. 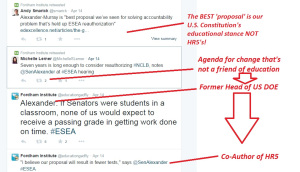 Now, there are many others spreading fallacies as those revealing the truth. As I didn’t highlight every single truth warrior, I’m not going to highlight every single fallacy maker. Why? Because our energy needs to be focused on acting on the truth. How do we do that? Hold your Congress members accountable! Remind them YOU are their boss, not the special interests, the CCSS Machine. Laws cannot and should not be written to support an illegal agenda!

Closing:
Use this final paragraph as a tool.  “Open Secrets” has a published track on who lobbied in the 2013 version of HR5.  See: http://www.opensecrets.org/lobby/billlobs.php?id=hr5-113
Are the same organizations from the 2013 version of HR5 STILL supporting it today? If so, expose them. Chances are, as a studied warrior against CCSS, you know more than those voting on the legislation. Your voice matters! Our students matter! Our nation matters! This is NOT a time for silence. Don’t pass the warrior buck by saying “I’m too busy, but you’re doing such a great job, I’ll let you fight for me.”