In my final installment for the anti CCSS School Board Special, I want to thank each and every one who has shared this news with a candidate. Regardless if we know a candidate who is seeking an office on our local school boards, state level education departments, or any other position connected to education, This series is IMPERATIVE! As Anti CCSS Warriors, we MUST also know this information. As you have been able to see, the ESSA (Every Student Succeeds Act) is a law filled with overreach into every educational choice, every family’s home, every citizen’s community, and every patriot’s rights.

So, What More Can I Share with the Candidates and Citizens?

For starters, below is a timeline of the most important dates the ESSA will be using. Note, there are other dates NOT listed below. Why? I found this timeline on a Gates Foundation funded/pro CCSS website’s featured page. Source: http://ascd.org/public-policy/Capitol-Connection-Jan-12-2016.aspx

“January 2016*: The (US D of ED) department will identify and invite individuals for a negotiated rulemaking panel to address Title I standards and assessments and the supplement-not-supplant requirements. The panel will comprise federal agency representatives and education stakeholders who will work to reach consensus on what may ultimately become regulations.
February 2016*: The negotiated rulemaking panel will hold its first meeting in Washington, D.C.
March 2016*: The department will draft all proposed regulations and will submit language for regulatory review.
April–May 2016*: The Office of Management and Budget (OMB) and Office of Information and Regulatory Affairs (OIRA) will conduct administrative reviews; these are required by law to ensure alignment of proposed regulatory language with the administration’s policy priorities.
May 2016*: Regulatory language will be submitted to Congress for review, as required by ESSA. The department will make adjustments based on congressional comments.
May–June 2016*: The department will publish the final Notice of Proposed Rulemaking in the Federal Register, allowing 60 days for public comment. Capitol Connection will notify readers when this notice is published.
July–August 2016*: The department will begin reviewing and responding to all comments from the public. Final language must undergo additional reviews by OMB and OIRA.
April–June, 2016*: The department will begin peer review of state assessment systems, as required by ESSA. This step ensures that state assessment systems meet nationally recognized professional and technical standards. Under the reviews, each state will receive feedback from external experts on its current assessments.
July 1, 2016: Formula changes under ESSA take effect (e.g., Title I funding for disadvantaged students and Title II funding for educator supports).
August 1, 2016: NCLB waivers end. States will not be required to deliver follow-up actions previously required under waivers, unless such actions relate to areas covered by ESSA.
October 1, 2016: Changes to competitive grant program funding in ESSA take effect. A program that is no longer authorized in ESSA will get only one more year of funding (subject to appropriations), even if time remains in grants awarded prior to reauthorization.
October 2016*: Final regulations will be published and go into effect.
School Year 2017–2018: All other ESSA provisions will take effect.”

What you as a candidate or a citizen can do: Note the periods of public involvement! Note that Congress will have to respond in their comments to the U.S. Dept. of Ed. This means our voices can be heard–either from our own mouths or those of our Representatives and/or Senators! In other words, we can push back with vigor, with passion, and repeatedly!! Persistence pays off, Anti CCSS Warriors!

You can also refer back to the previous 3 articles to see where these dates (above) will impact your area of most concern. Be it the birth to 5 year olds, the Special Needs, English Language Learners, Native Americans, the 6 year olds to high school graduation, the post-secondary students, local economies, military bases, or those citizens just seeking a job.

Feedback You Need to See:

As part of the final installment, I want to share the feedback this series has gotten. Why? As a candidate, you should hear what the people who vote for you have to say. You need to hear what their hearts are burdened by, as well.
1) From the Facebook Page ‘Common Core Critics’, “Thanks for sharing. Praying this will open up eyes/hearts/minds to the immoral standards and global….propaganda being pushed upon our children/grandchildren.”
2) From the Facebook Page “Stop Common Core in Georgia”, ‘So a new law: ESSA will take place of Common Core and this ESSA is kind of like the ‘no child left behind’ bit from a few years ago…. a new name, same old stuff.’
3) From my personal wall, in response to Part One, “Lengthy but worth it. Thank you for what you do.” In response to Part Two, another comment, “Why should you be fighting against education as it is and the new ESSA that has enshrined the Common Core into education at the start of the school year 2016?”
4) From the Facebook page “Kansas Against Common Core”, their response to Part One, ‘For those of you who think your kids are too young and you don’t have to worry…guess what…you do!’
5) From a voter, “I will be looking for the anti common core candidates.”

6) Here is the first screen shot of the conversation two of my friends struck up. I am sharing their words so you can begin to see and read the frustration. 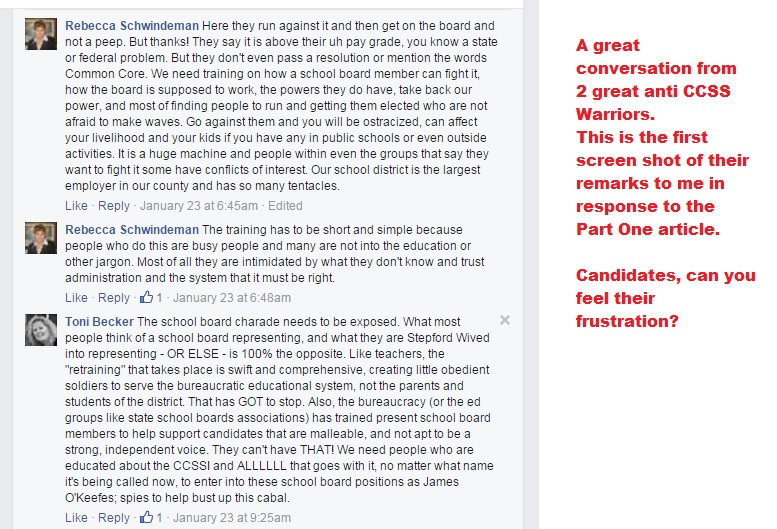 Here is the rest of the conversation: 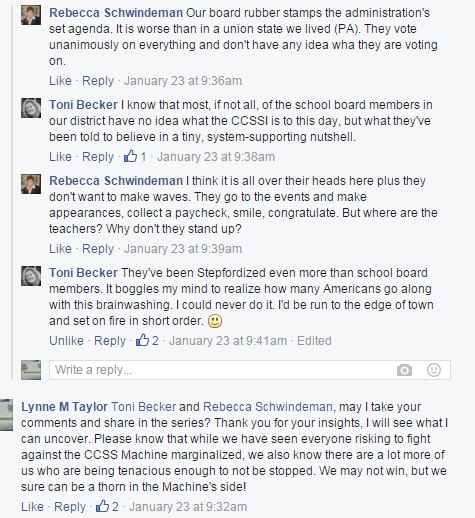 Candidates, do you see the pattern? Rubber stamping, being coached! Please, be strong and STAND UP to the CCSS Machine!

7) Lastly, from the “Stop Common Core in Pennsylvania” Facebook page, this screen shot. I am providing it so you can see what a school board fed up with Common Core was able to do! 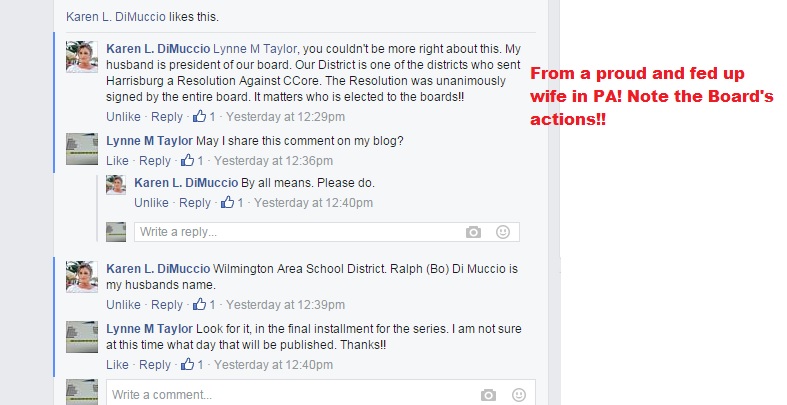 Candidates, do this mean this school district is through with CCSS? We would need to ask them, however, know that while Resolutions declare our positions against CCSS, we have much proof that the LAWS protecting CCSS, will be what is upheld.

The biggest take away as someone running for office? Do your homework, read all you can between now and your first debate, get the facts! Stand firm in your opposition, too!

Thank you, candidates for your bravery and determination.