In the COMING 5 days, you can probably ‘bet the farm’ that the U.S. Congress will continue their part in the CCSS Machine’s grinding down of our nation. What about your State’s legislative body? If they are like where I live, they have already ‘left the building’. However, they too, were ‘busy beavers’ before they left.

Congress is rushing. A couple of big reasons:

B) The 2016 Elections are the OTHER big push to wrap up the overreach activities…for now.

Congress, You are NOT doing the job you are elected to do TODAY. You are NOT truly listening to your voters. You are NOT creating legislation or voting on it as IF it’s the LAST piece of business you ever do in D.C.! You are an ELECTED person with the PRIVILEGE of service, NOT the GUARANTEE of job placement! You have forgotten overreach in education is ILLEGAL! So why should anyone send you back to do it all again?!

During the past 5 days, not every one of my articles has been accessible.  So, in the confidence you can use these fact based research articles to REMIND Congress of ITS true place, I offer:

1) Congress Loves CTE (Career Tech Education)
Use this to remind Congress, sold out members to the lobbyists for the CCSS Machine is UNACCEPTABLE!
https://www.commoncorediva.com/2016/08/09/congress-loves-cte/

**After the elections, H5587 (Strengthening Career Tech Education for the 21st Century) should shift over to the Senate, as it passed the House, 405-5. As of this writing, there is no hearing scheduled by the Senate HELP Committee to move on the sister bill (which by the way was postponed in the past 5 days), S3271, Workforce Advance Act. BOTH HR5587 and S3271 are in the “Congress Loves CTE”. I checked the calendars for both the Senate and House and saw no mention of either of these education bills.

2) Related to the HR5587 and S3271, is  S3190, Strengthening Our Rural Health Care Workforce in the 21st Century.  Use this article that you will not ACCEPT one more piece of legislation which cements a healthcare law no one took the time to read.
https://www.commoncorediva.com/2016/08/16/ctes-health-country/

Also related, and not appearing on the calendars for the upcoming 5 days in D.C. is the extremely egregious bill of all, S3174, or the Ladder Act. Any bill related to workforce which uses the opening word of “Leveling”, you know is going to mean MORE federal control.  Use this article to send the message to Congress that ONE more Executive Branch (independent) Council is not only UNACCEPTABLE, we WILL not fund it! https://www.commoncorediva.com/2016/08/18/americas-obsession/

In the past 5 days, the U.S. Congress also saw the advancement of the H5963 (Supporting Youth Opportunity and Preventing Delinquency Act of 2016). The House passed it by 382-29. I covered this bill in “The Chain Gang Cometh”. This was the one article which caused the most uproar. Here’s the link:
https://www.commoncorediva.com/2016/09/13/the-chain-gang-cometh/
Use this article to tell Congress, NO! Absolutely no support or opportunity is worth what is being considered as appropriate for our children!

**Since ‘Chain Gang’:
a) I have heard from several concerned parents who are already seeing some of the same moves mentioned in the article happening now in their children’s schools.
b)  I’ve also heard from my dear fellow anti CCSS Warrior, Dr. Karen Effrem, who did plunge deeper into the Bill than I could. She was addressing my deep concerns over the language of the Bill.
She found that the those chemical agents are only mentioned one time in the entire Bill, in the definitions portion of the Bill. Use of and/or limits for use are not in the Bill, just the definitions.
“Incapacitate” is part of the Bill’s definition language for ‘chemical agents’. It doesn’t appear anywhere else.
Dr. Effrem also shared this with me, “However, the bill also adds another new definition called “dangerous practice,” which is “an act, procedure, or program that creates an unreasonable risk of physical injury, pain, or psychological harm to a juvenile subjected to the act, procedure, or program.”
After this, Dr. Effrem also said it looks as is the Bill is to minimize use of dangerous practices via several mandates. She directed me to page 44. However, at the end of page 44, you’ll see this, “including by developing effective behavior management techniques;” (so, in essence, not so many restraints, but more behavior management). On page 52, you’ll see the training efforts and reforms have produced reduction/elimination of dangerous practices.

Both Dr. Effrem and I agree, even with what we both found, this Bill has some definite areas we WARRIORS must watch, ask about, and be ready to protect. Why? Refer to the parental reactions this article stirred. Dr. Effrem suggested we contact the main sponsor, Rep. Curbelo. We both realize time is short, but with definitions for chemical agents in a Bill for our children and the gray areas for who uses, when used, and IF they are to be continued is a HUGE problem. Oh, and Curbelo’s in the midst of a re-election campaign.

In the period between Congress’s departure and whomever returns, Warriors, we should keep the amount of parental concern in our forefronts. Then, add the following concerns around H5963:

a) the U.S. Dept. of Ed’s definition for ‘at-risk’ youth encompass several more student groups than those who are low-income or at-risk/troubled.
b) younger and younger students are being identified as ‘at-risk’ or ‘troubled’ (an example: the number of kindergartners who are being suspended for simply being child-like in their actions).
c) to be identified as ‘at-risk’ or ‘troubled’ there are mental health assessments, behavior management or interventions which are increasingly being placed on the already overburdened teachers.

If you’d like to know the side effects of use for the chemical agents in the Bill:
Pepper Spray: https://www.ncjrs.gov/pdffiles1/nij/grants/181655.pdf
C2 Tear Gas: https://toxnet.nlm.nih.gov/cgi-bin/sis/search/a?dbs+hsdb:@term+@DOCNO+4346
Washington Post’s article on Tear Gas: https://www.washingtonpost.com/news/morning-mix/wp/2014/08/14/tear-gas-is-a-chemical-weapon-banned-in-war-but-ferguson-police-shoot-it-at-protesters/ 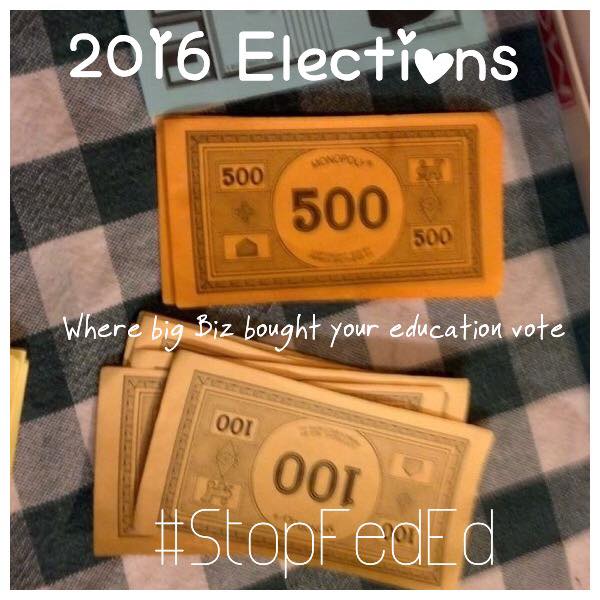 Warriors, one of the best weapons we have this election season is PRESSURE. The sold out leaders (from our school boards to the White House) have been identified. If these CCSS Machine members haven’t been identified by now, it is only right they should be now. Why? Our vote is our voice! If our stance against federal overreach in education is solid, so should our voice! To say we stand against CCSS and ALL that goes with it, then elect or re-elect those who will continue its chokehold on our nation, will be a signal that we’re not as effective as we can be in the War Against the Core.

So, I invite you to use the #KnowBeforeYouVote to share what you know about any candidate who’s running. For example, here’s a screen shot plainly showing names, the CCSS Machine member organization and some researched truth. If you like and support ANY candidate who’s not being forthright about education, confront them. If the candidate is using one too many canned educratic words, confront them! How you use your pressure as weapon is up to you. I, for one, will use as much evidence which is truthful, as I can.

So, what will happen in the next 120 hours? Plenty. What will we, the Warriors do between now and the election? Roar!