Anti Fed Ed Warriors, we know, no matter when Congress is in session, bills getting passed is a distinct possibility. Even when the sun’s setting on the 115th Session.

We saw this happen with ESSA (Every Student Succeeds Act) back in 2015.

Fast forward to 2018 and a seemingly unrelated Bill (HR2) has passed Congress and appears to be heading straight to President Trump’s desk for his signature into law.
HR 2 is a whopping $876 billion dollar boondoggle.

What’s that? Conformity to STEM (Science, Technology, Engineering, and Math) which in turn conform the US to the UN’s SDGs (Sustainable Development Goals). The ‘magic beans’ also will conform education to workforce development yet again, just like WIOA (Workforce Innovation and Opportunity Act) and ESSA. 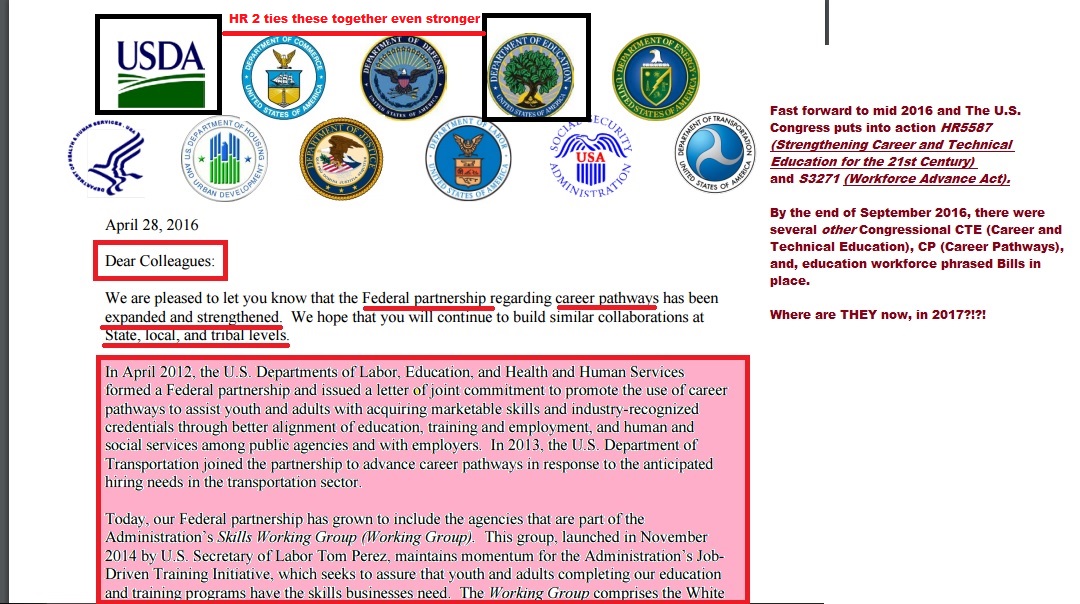 However, adding to what’s in place via HR 2353, the current HR 2 will further strengthen the ties between ED and AG. Thus, strengthening the federal chokehold on education.

*Note: Sadly, though, HR 2 also ties into the SDGs by setting up massive amounts of land grabbing (eminent domain) by the feds.

Of these items, each is already in place, but the tie to HR 2 will make the ties even more solid.
1) more STEM via bioagriculture education. STEM is embedded in WIOA, HEA, and ESSA, too.

2) Since HR 2 also includes SNAP benefits (Supplemental Nutrition Assistance Program) for low-income families. SNAP funds are embedded in ESSA, too. Using schools as ‘hubs’, especially for food ties right back to the ESSA 21st Century Community Learning Centers and wrap around services. These very services (which also include health care, mental health services, and more) are part of the plan laid out for community control via the SDGs.

3) “Nutrition education”. Have you seen the nationalized nutrition standards being taught in schools? Back in Sept. 2018, Utahns Against Common Core helped expose the IL based organization behind the National Food Education Standards directly aligned to Common Core. Why? Those same Standards are being used across the nation..already! The Standards push using MyPlate (the USDA’s idea of proper nutrition) as well as using students as ‘agents of change’. A sample lesson for the Standards (K-12) have SEL (social emotional learning) as the #1 activity.

Notice, below, how the children are being used to advise the parents. (Warriors, what other issues have we seen the CCSS Machine use children against their parents?)

1) Infrastructure changes (as in internet access for rural areas), start at Page 583, then read who will get priority for infrastructure changes. Then be sure to note where it directly cites the ESEA (Elementary and Secondary Education Act as amended by ESSA). The federal government is expanding this effort to help increase the digital ‘ecosystem’. (I found that near Page 628)
My previous research on this invasion of privacy, as laid out in ESSA.
2) Community grants, especially for health and safety programs (will include substance abuse; which means more SEL), P3s (public private partnerships), rural business co-ops will involve higher education institutes, especially in regards to Native Americans.
3) Research grants for agri-science (including support for wheat diseases)
4) Funds for hybrid learning, especially in higher education; food safety education initiatives
5) Urban farming, education, and, research
6) Data mining
7) Grants for youth organizations (look for an increase in apprenticeships, CTE courses, etc. for agriculture, bio-science, etc.
8) “Equity in Educational Land-Grant Status Act of 1994”
9) Funds for bio-diesel and carbon utilization education
10) Funds for Native Americans and food
11) Amending the Nutrition Education State Plans (students will be measured, evaluated, and electronically reported on)

You’ll also want to read Section 4115 (begins Page 369), for each State’s Plan to be followed for emergency food allocation, as well as the P3s and other stakeholders to be involved.

Beginning on Page 379 (Section 4304), is a section which should cause great interest: “Harvesting Health Pilot Programs” Take a non-profit, add in a health care provider, a prescription, and a low-income person who suffers (or is ‘at risk of developing’) from a diet related health issue. Among the pilots is the “Produce Prescription Program” and will include education as part of the pilot program/prescription. As part of the pilot, a MOU (memo of understanding) is involved.

Warriors, do you see WHY this should raise interest?! The federal government overstepping into your food choices, your health care, AND your education in ONE pilot program! We DO NOT need a nanny-state government!

From Page 616 and 617, this pompous federal government quote:

Warriors, 26 federal agencies and federal offices (including the U.S. Dept. of Education) are among the Council members. This doesn’t include any of the others designated by the any of the 26. See Pages 617 and 618. Talk about a federal expansion of government!!!

Beginning on Page 638 and carried over on Page 639, HR 2 amends the National Agricultural Research, Extension, and Teaching Policy Act of 1977 to include ‘international collaboration that leverages resources…’ Warriors, do you see what this means? ‘Leverage’ in a government’s hands is NEVER in favor of We the People! There are several other amending clauses to the 1977 law, in most of the ones I saw, all this is extended to the year 2023. Also, associated with the amendments are competitive grants for international ag and science based programs. You’ll be interested that the authority of the Secretary (Agriculture’s) gets an increase in promoting international partnerships. Remember, Warriors, these partnerships impact our food.

Warriors, much like S1177 (Every Student Succeeds Act) was foisted upon us in December 2015 and was an omnibus bill, HR 2 is proving to be very similar.
There are even more educratic expansions, mandates, and whopping tax dollars to make it all happen; at our expense which I didn’t even touch on. Read the Bill, now what’s coming up, especially in you are in a rural setting!

I’m sure the CCSS Machine, the federal government, and the U.N. are thrilled over HR 2 passing almost every hurdle. It’s their ‘magic bean’. I’m sure they envision a magic beanstalk. From an education research stance, I see a giant of a problem with all this.
A giant we need to slay.