FTF: This Just In: Military Bases, Economy, and, CCSS

A new pro CCSS report filled with the pro CCSS side’s version of truth is now available for we, the warriors, against CCSS.

The book was announced on Twitter by the CCSSO (Council of Chief State School Officers), Dr. June Atkinson, on July 6th, 2015. See below: 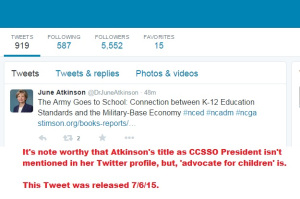 I’ll be sure to post the link so you can access the latest ‘news’, but first, I want to share another report about military families and CCSS. My fellow anti CC Warrior, LadyLiberty1885, pointed out this report from Pioneer Institute. Here’s the lead in sentence: “Study finds college and career readiness focus of Common Core a disconnect with students from Military Families since majority are under seven years old.”  If you’d like to access more about the not surprising statement OR read the rest of the Pioneer findings, visit: http://pioneerinstitute.org/education/new-report-the-successes-and-challenges-of-educating-military-connected-children/

It’s amazing to me how the CCSS Machine and its operators will try to spin everything possible towards keeping the Common Core. Dr. Atkinson, especially. So why is she offering up the latest information about CCSS and the economy? Timing, my fellow warriors. With all the hub-bub in D.C., it makes sense to have one high profile, well known CCSS supporter suddenly ‘reveal’ a little known benefit to keeping CCSS.. boosting the economy of military bases..which indirectly boosts America’s economy. Alas, my warriors against CCSS, what have we discovered time and time again in this war? Economics is one of the major goals for the CCSS Machine, not an academic education!

The Military Base Economy Author:

This report is written by Matthew Leatherman, of NC. He’s a non resident fellow of the Stimson Center (more about them in a bit) as well as “Matthew also is active on national defense issues at the state level in North Carolina. He has been a special correspondent for the Raleigh News and Observer’s opinion page for four years. Matthew also is an independent adviser to the US Global Leadership Coalition’s North Carolina project, the University of North Carolina’s Citizen Soldier Support Program, and the Chamber of Commerce in Fayetteville, Fort Bragg’s host community.” To see his entire ‘expert’ biography,
http://www.stimson.org/experts/matthew-leatherman/

Every one of this groups is either tied to the CCSS Machine, helped form it, or, makes it their business to ‘sell it’ to the USA as a ‘good thing’. So, not only do you have one of the chiefs of the CCSS Machine revealing new information, you have a well connected CCSS supporter writing the information up. Excuse me, haven’t we had enough subjectivity about CCSS? Objectivity is something the CCSS Machine can’t handle, folks! The CCSS Machine’s tactic is eerily like Jack Nicholson’s character stated in “A Few Good Men” :

“You Can’t Handle the Truth!”

Warriors, take heart. We, as opposed to the CCSS Machine have been quite successful at not only handling the truth, but exposing it on a daily basis!! As long as the CCSS Machine continues to dis-serve our nation with their lies spun as truth, we WILL handle it. Why? Because we possess some things the CCSS Machine left in the dust years ago….
Honesty, Integrity, and Justice

Titled, “The Army Goes to School: The Connection Between K-12 Education Standards and the Military Base Economy”, June 2015. Stimson (the group Leatherman wrote this for) is offering a free download of the report. Get yours, http://www.stimson.org/images/uploads/research-pdfs/ArmyGoesToSchool.pdf

Here’s who helped fund this report, “A grant from the New Venture Fund made this project possible. Stimson was fortunate to partner with the Collaborative for Student Success, a “non-profit organization consisting of a diverse group of regional and national education foundations committed to improving public education.”

Great, more subjectivity for the CCSS Machine. What do I mean? Here’s a brief look at Stimson, New Venture, and the Collaborative for Student Success.

Stimson: “Founded in 1989, the Stimson Center is a nonproﬁt, nonpartisan institution devoted to enhancing international peace and security through a unique combination of rigorous analysis and outreach. The Centerʼs approach is pragmatic — geared toward providing policy alternatives, solving problems, and overcoming obstacles to a more peaceful and secure world.” Funding for Stimson? A mix of public and private organizations which include pro CCSS supporters the Carnegie Foundation and the United Nations. You’ll need to see what other groups are funding to believe it. See: http://www.stimson.org/images/uploads/Stimson_Funding_Report_2014.pdf

New Venture Fund: “The New Venture Fund (NVF) works to achieve a healthier, more equitable world. Our work spans a range of issue areas to realize social and environmental change.”  Here’s more, “The New Venture Fund, a 501(c)(3) public charity, supports innovative and effective public interest projects. NVF was established in 2006 in response to demand from leading philanthropists for an efficient, cost-effective, and time-saving platform to launch and operate charitable projects.”
Funding for NVF? A major long term funding organization is the Gates Foundation. When I searched the grant data based provided on the GF website, I got 62 different grants tied to the NVF. That’s just one pro CCSS backer (and not to mention one of the biggest backers). See: http://www.gatesfoundation.org/How-We-Work/Quick-Links/Grants-Database#q/k=New%20Venture%20Fund

Collaboration for Student Success: “The Collaborative for Student Success is a grant-making initiative created with the pooled resources of a diverse group of regional and national education foundations deeply committed to improving public education. The members of the Collaborative share the belief that the successful implementation of the Common Core State Standards is an important next step in ensuring that all students are prepared to succeed at college level work. The mission of the Collaborative is to support the state-led efforts of State Education Agencies and local education organizations responsible for educating and informing all stakeholders — parents, students, teachers and community leaders — about the new state standards and assessments.”

Other CCSS Nuggets From Leatherman’s Report:

1) “Communities that host Army bases should take heed of this powerful message from General Odierno, which otherwise might sound like an ordinary endorsement of good schools. Many of these communities have a deep economic dependency on military wages. Losing soldiers and their wages for any reason, including because of shortcomings in their schools, would push the economies of host communities sharply downward. In this sense, the Army’s impact is similar to other major employers, and the potential for transfers within its future workforce of 420,000– 450,000 men and women could reshape the economic landscape of cities and regions.”

2) “The Army has completed the evaluation of local schools General Odierno promised in the family forum 18 months ago. This review — known as the WestEd study — will recognize those communities that meet the Army’s baseline education standards and identify those that do not.”
Related: The “Military Times” article about the WestEd Study shared the results of military kids on CCSS were ‘average’. See: http://www.militarytimes.com/story/military/benefits/2015/07/01/study-shows-mixed-results-quality-of-schools-military-children-attend/29566721/
WestEd is ‘all in’ with the CCSS Machine. Here’s their website, http://www.wested.org/ (*Note: see how quickly you can identify all the ways in which WestEd loves CCSS)

3) “The only comparable nationwide academic standards today are the Common Core State Standards, which cover mathematics and language arts. The Pentagon decided in June 2012 to use Common Core standards in the schools it runs on military bases.  Meanwhile, a majority of states overall have adopted Common Core, but states that host the Army’s bases have varied in the decision whether to adopt these standards. Missouri and North Carolina, for example, have adopted Common Core, though both state governments have taken action to reconsider this decision. Texas, which hosts nearly 80,000 soldiers at bases like Fort Hood and Fort Bliss, has never adopted common standards,neither has Virginia nor Alaska which boast major installations such as Fort Lee and Fort Wainright, respectively. Oklahoma, home of Fort Sill, initially signed up for Common Core, but then reversed the adoption of the standards.” (*Note: did you spot all the pro CCSS truths, which are the anti CCSS warriors examples of their web of lies?)

Lastly, the CCSS Machine can’t handle that many of us warriors against CCSS, have uncovered, researched, and reported the real truths about the military and Common Core. I offer you, my previously published article:
https://www.commoncorediva.com/2015/04/16/tech-thursday-common-core-military-special/ (includes more on the Collaborative for Student Success and U.S. State Dept. documents)
An excerpt from my 3/20/15 article about elected officials and CCSS which is suitable for today’s context,

“The entire debacle is un- Constitutional! It’s a domestic enemy! Every time you continue to allow Career Tech Education, rebrands of CCSS, Career Pathways, Workforce Education, high stakes assessments, textbooks that are rewritten to teach America is a hostile nation, YOU are the domestic enemy! Instead of keeping your oath to do all you can to protect, you’ve replaced it with a pledge to the CCSS Machine (all those fund, create, and continue to purport CCSS) The fact that federal funding has been accepted to help further align has happened of each of your ‘watches’ in office! How is that protecting the people OR defending the Constitution?!

Here’s, my version, of the pledge you’ve sacrificed us all for:

“I pledge my allegiance to the Core and to the deterioration for which it exists.
I have pledged my support to the degrading of my people which CCSS ensues.
That being one way to learn, for all, indivisible and rigor for all.” “