Hello, my fellow Anti CCSS Warriors! Most of us know how toxic the Every Student Succeeds Act (ESSA) is. Some of us are aware of the currently-open-for-public-comments ESSA Proposed Regulations which are EVEN more toxic to State-led education. How? In a couple of words: power grab.

That’s right, a U.S. Dept. of Education power grab. Most importantly at the hands of the Secretary Dr. John King. However, I want to point out a few items:

1) While the regulations do give Dr. King more power, it is a purposed plan that has been in the works for years. Helping lead that plan is none other than Sen. Lamar Alexander. By now, you have probably seen his infamous late 80s speech where he laid out the whole ‘birth to grave’ education plan. So, know this: every time you hear Alexander bemoan how Dr. King is disregarding the way the ESSA was written, he’s not being honest. Alexander knows EXACTLY how and why the ESSA was written like it is..to give the illusion of State-led education. King’s Proposed Regulations are merely one of the means to an end.

2) Both Republicans AND Democrats in Congress are responsible for passing ESSA as it is written. Remember that at election time. While some are focusing on the Presidential race, we, as Warriors must keep in mind that OUR Congress members are up for elections, too. As are the Governors and other State leaders. As we Warriors know, many of these from D.C. to downtown are part of the CCSS Machine already.
Each of these levels of political power stands between us and a truly free (and Constitutionally honoring) state-led educational system free from the CCSS Machine.

3) The Proposed Regulations are NOT the way to have state-led-CCSS-Machine-free education. Quite the polar opposite. The Regulations AND ESSA in its entirety  give us MORE CCSS Machine led education from the federal level.

How do I know this? Reading the ESSA in its entirety as well as the Regulations. What follows is the fruit of what has been uncovered.

Enter the US PIE:

As you may (0r may not) know, I am among the members of Leadership Team of the national group known as US PIE (United States Parents Involved in Education). In the past, I have shared with you how we have worked together to bring attention to the ESSA’s passage, Dr. King’s nomination and confirmation, and now, those ESSA Proposed Regulations. Those of us in leadership, the advisory council, State Chapter Presidents, and parents have one main goal: the abolishing of the U.S. Dept. of Education, thereby ending the main source of federally led education.
If you are not aware of the US PIE and would like more information, visit: www.uspie.org

Over the past couple of months, you may remember me stating that I was working on a special project. Well, now I can reveal what a small working group of us involved in US PIE have been up to. We have undertaken reading all 192 pages of the ESSA Proposed Regulations. It has not been easy. It has taken many hours. We are not the first group to pour over the Regulations, however, we didn’t stop at the Regulations the U.S. Dept. of Ed wanted the most public input on, we meticulously looked at all the others. As Warriors, we know when any part of the CCSS Machine points us in one direction, they are up to all kinds of craftiness where we aren’t looking.
Here a few facts to get out of the way before I share with you our ‘tasty fruit’:
1) The Regulations are supposedly suggestions the U.S. Dept. of Ed  is making to carve out how ESSA will look in our backyards. (heavily influenced by the CCSS Machine)

2) The Regulations do not state who authored them, but in most footnotes you can see CCSS Machine member organizations as cited sources for certain portions.

3) If the ESSA is to be truly State-led, why did the federal U.S. Dept. of Ed make enough rules, regulations, and strings to create a 192 page document?

4) While some Regulations increase King’s power, there are some which rubber stamp ESSA’s original language (which is now the law).

5) The U.S. Dept. of Ed asked the public to comment no later than Aug. 1, 2016. The 4 Regulations we, as the general public, are to focus on: 1) identifying consistent underperformers; 2) stopping the low turn out during assessment periods; 3) long-term ELL goals; and 4) Title One updates. 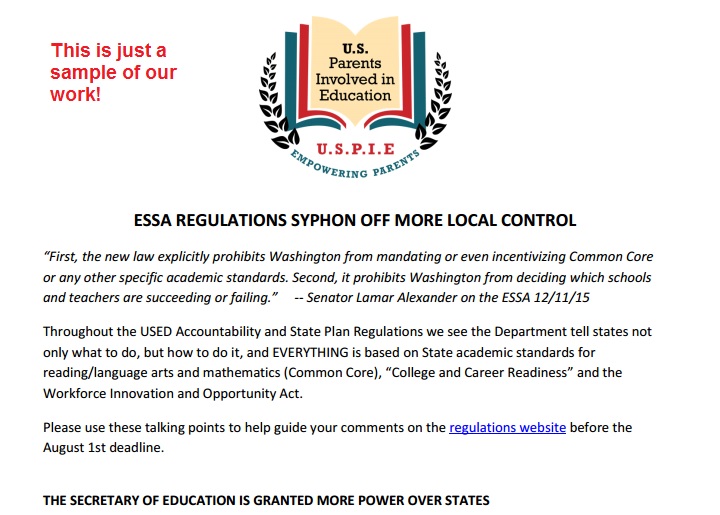 Warriors, what our team found is truly disgusting. We found items that as far as we know, no other group reporting on the Regulations have shared.
For example:
The Regulations include Dr. King’s creation of a new national educational research facility especially for gifted and talented learners. He will be in charge of selecting staff, organizing the facility, etc.
Another example:
The Regulations include where Dr. King is to define for the States what certain educational (or supporting education) programs are to look like, what resources they are to use, etc.

We have created a 4 page Talking Points document to help guide the Anti CCSS/ESSA Warriors to the other disgusting truths we uncovered. It is imperative we use the resource to help point to those we have contact with about what TRULY is in the works for American education. It is a helpful resource to use in making any public comments you feel you should make to the U.S. Dept. of Education by 8/1/16. The link to the Comment page is embedded in the Talking Points.

We have produced this resource (fruit) as a labor of truth for our nation. It has been an honor to work with such dedicated team members from across the USA. To access the Talking Points document and start using it as a truthful Anti CCSS/ESSA weapon,
http://nebula.wsimg.com/c3dbda7825b179bb2ad5358ef3acc6a4?AccessKeyId=13C8A0E7EBB1F1E5E658&disposition=0&alloworigin=1

Hopefully, you are fired up and ready to reach out to the U.S. Dept. of Education. Great!! US PIE is inviting anyone who desires to help us publicly (and peacefully) protest the ESSA and its Proposed Regulations. I posted on my Common Core Diva Facebook page news about how you can help us with the protest.I also invited my followers to join in the Rally.
*If you are not on Facebook, details are below.

You can also find (on Facebook) the Stop Fed Ed page (that is the public Facebook page for US PIE). They have posted the official group invitation for the Rally.

Here is what I posted earlier today:
“I have been busy getting tweets and memes ready for the upcoming US PIE (United States Parents Involved in Education) and PJNET (Patriot Journalists Network) joint anti ESSA Rally on 7/25/16 from 7 pm to 9 pm (EDT). We are using the Rally to protest the current ESSA Proposed Regulations! Upload any appropriate meme or jpg image on Twitter using the hashtags:
‪#‎ReinInTheKing‬, ‪#‎StopFedEd‬ @usedgov ‪#‎PJNET‬ BEFORE 7/24 (all memes and tweets will then be compiled for the Rally on 7/25)”

Below find a few examples of what type of memes or jpgs you can create. Be sure to include any of the talking points you are especially angered by. At least 50 different images and tweets are needed! Right now, there are less than 20. Please help us.

Here is one of mine: 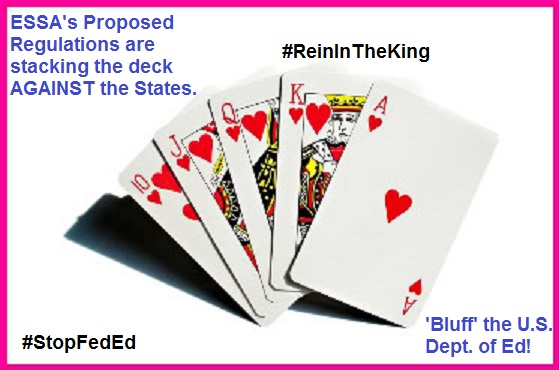 Here is one from US PIE (Stop Fed Ed): 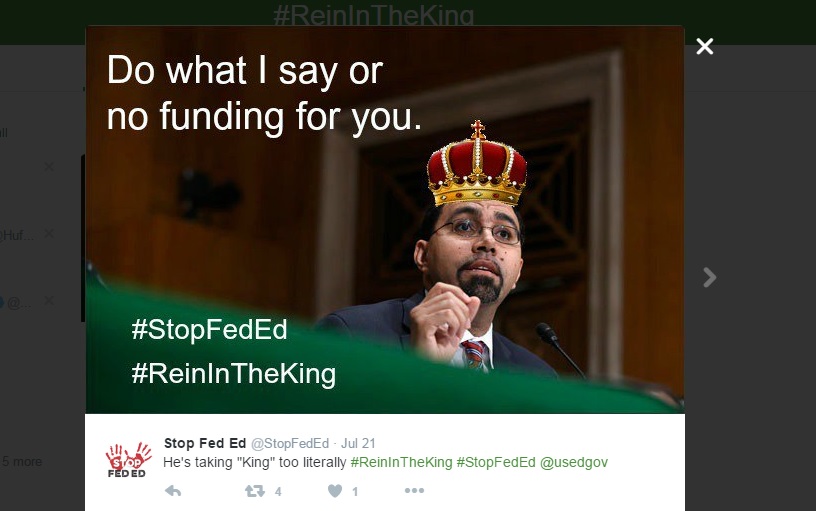 Here is another truth zinger  I put on Twitter: 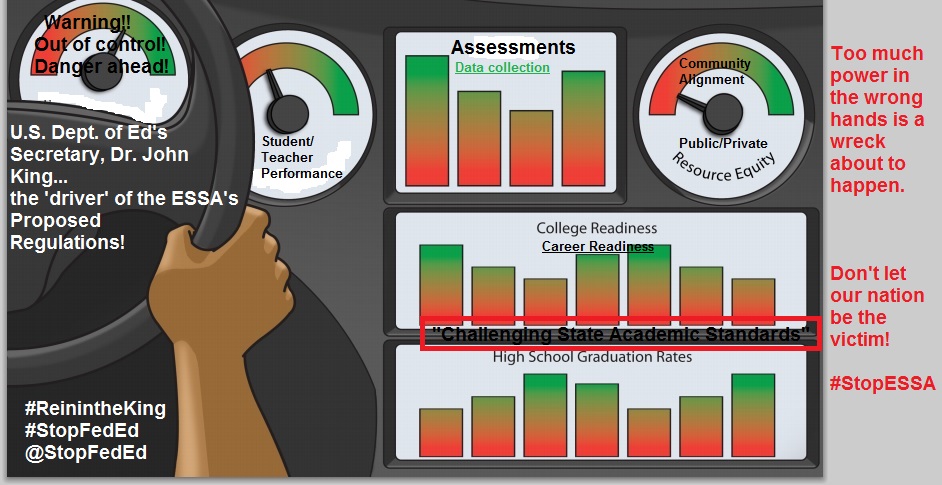 Remember, there is no obligation to join US PIE for this Rally. You simply have to be beyond fed up with the U.S. Dept. of Ed’s overreach in education. Any opposition you can help muster up will be a blow to the CCSS Machine. That, my fellow Warriors, is a worthy means to OUR end.