Anti Fed Ed Warriors, as promised this is the follow up article to last week’s Women on the Wall Conference call, as well was stated in my last article.

(If you cannot read the highlighted portion, it says “That Congress is discussing combining FERPA with HIPPA. Meaning FERPA will no longer trump HIPPA , but that all data will be combined and shared with the Dept of Labor and Workforce Services, all in the name of social emotional learning and mental health.”)

Warriors, the Congressional ‘discussion’, I do believe (and declare), is S 3337. As far as the data being shared with the U. S. Dept. of Labor? That already happens between U.S. Dept. of Education, U.S. Dept. of Health and Human Services, U. S. Dept. of Labor, and every other U.S. federal agency, plus any group they work with. HOW? The ‘marriage of the SLDS and WQDI‘. (Student Longitudinal Data System/Workforce Quality Data Initiative)

Why I Am Declaring:
Why do I believe S 3337 is THE bill?
1) I read it. All 21 pages. Then I looked closer into NASBE as well as the legislators behind S 3337. Think of it as a puzzle. The pieces are coming together.

2) This August 2018 bill fits the timeline for NASBE, as well as the FERPA/HIPPA combination. How? Well, first off NASBE has two conferences each year. One is held early in the calendar year and select State Board of Education members go to Washington D.C. to meet with legislators and talk education policy and reform.

The photo above from the NASBE conference last week, was for everyone to meet and learn about education policy and reform. So, NASBE meets early 2018, by mid August S 3337 is introduced. By October 2018, NASBE is talking about Congressional discussions. While to the best of my knowledge no bill was mentioned look at what I found in S 3337, which is very clear (I found these in the Technical Amendments for S 3337):

As was shared on the Call, HOW FERPA and HIPPA could be combined is through ‘school safety’. “School safety” is linked the P-20W (PreK to College Graduation or Workforce) data system.
Also, tons of data is harvested at the doctor’s office. Add to that ‘experts’ who testify to powerful committees WHY it would be great to see FERPA and HIPPA merge, and before you know it, there’s a bill for that. Warriors, by already having SLDS and WQDI merge (which already impacts all education choices and ages of students), the merging of FERPA and HIPPA will help CLOSE any other ‘gaps’.

Other Items Contained Within S 3337:

Warriors, I’m not listing everything in the Bill. Trust me, there is a TON you need to see for yourselves.

1) The title is Mental Health Services for Students Act. It amends the U.S. Public Health Services Act, as well as revises and extends federally directed projects which relate to our students and creates access to school based mental health programs. This bill also revises and expands Project AWARE State Education Grants.

2) These education grants must be used for school based mental health; mental health professional development which must be comprehensive and extended to the community; improving outcomes in academics and mental health for the entire family, especially those deemed ‘at risk’ or concerned community members; universal screening to identify students with potential mental health disorders or unmet emotional needs.

*****The HIPPA/FERPA link will show up in the  formal working relationships S 3337 establishes between HHS and Ed entities in school settings.*****

a) HHS Secretary and Ed Secretary control where the grants, contracts, co-operative agreements for school based mental health go.
b) Among the services they must include provide positive behavior intervention supports (PBIS).
c) School based mental health facilities must use community partnerships (there’s a huge list in the bill) such as law enforcement, primary and specialty doctors, and welfare; must include faith based organizations and higher education; determined by the Secretaries, and clearly state how families will be engaged. Funds used for comprehensive school based mental health must address universal prevention via SEL (social emotional learning), which blends into their learning and environment, as well as selective prevention to reduce risks of suicide and/or violence, or any developing mental health problems, as well as substance abuse. These involve screenings for early ID for mental health and behavior health problems.
d) Curriculum will be developed and implemented as well as (PD) professional development for all school staff and volunteers. Part of the PD includes being able to identify behavior or mental health issues and being able to use mechanisms (data system?) to link students, school based strategies to SEL.
Not surprisingly, all the school based mental health programs and services must be measured, evaluated, assessed, and reported. These ‘measures’ must include Title 9 of Medicaid or waivers under State Social Security plans as laid out in the Social Security Act, Part B or E of Title 4.
e)  Co-ordination for early intervention activities addressing mental or behavioral health must match  IDEA (Individuals with Disabilities in Education Act) or Title 4, Part A of ESEA (now ESSA, Every Student Succeeds Act).
f) Student can self refer or self consent to mental health programs, or in crisis, as the Federal and State laws allow. (*Concern: Could Canada’s hospital suicide assistance for minors without parental consent be coming to the US? This type of law may allow it.)


4) Under the “Measurements” mandated for reporting to the Secretaries (who in turn report to Congress), you’ll find proficiency assessments which will align to SEL and ESSA. Also look for how the clinical assessments will be measured and referrals. All these are heavily depending on one thing: personal data.

5) Under the “Information and Education” section, Secretaries establish a comprehensive data system which feeds the harvested data to doctors and the public. All of the S 3337 costs will total about $2 million for FY 2018-2022 and impact all Americans 21 years and under in the areas served by the grants. All of Part G of the Public Health Services Act will be renamed “School Based Mental Health”. One last thing, since most of this fall under the U.S. Dept. of HHS, HHS partners with NASBE!

The Legislators and Ties to NASBE:

The main sponsor for S 3337, is Sen. Tina Smith from MN. While not directly tied to  that I could find, she was appointed as a Senator to fill Sen. Al Franken’s spot. Sen. Franken is no educator, not is he a health professional, yet if you look at what he left Sen. Smith with, you might think she picked up where he left off. (Franken was a key legislator in a Career Tech Education Health Care bill.)
Sen. Smith is a huge STEM (Science, Technology, Engineering, and Math) supporter, as well as a pusher of all day kindergarten and expanding early childhood education. She wants America to invest more in CTE (Career Tech Education).  Smith also sponsored the “Real Education for Healthy Youth”, S 1653. That bill is a huge push for comprehensive sex education.
If you look at her Open Secrets campaign donations and Big Pharma is behind her. So are health services and hospitals.

To see Sen. Smith’s press release on S 3337, go here. In the release, Sen. Smith reveals at least 50 national and global groups are backing this Bill. While NASBE isn’t on this list, which of those listed does the group work with?

Also sponsoring S 3337, are Sen. Murphy from CT, Sen. Whitehouse from RI, and Sen. Wyden from OR.

Warriors, Sen. Murphy supports/ed not only ESSA, but believes the Affordable Health Care Act is worth keeping. On Murphy’s website, you’ll see his claim that by supporting ESSA he was helping repeal NCLB (No Child Left Behind). If the Senator has actually read ESSA, he would know what we do, that NCLB was CODIFIED, not repealed! Sen. Murpy also (in 2016) worked on the Mental Health Reform Act. His ties to NASBE involved the 2017 NASBE Legislative Conference where the CT Senator spoke along side U.S. Dept. of Education’s Secretary DeVos.

Simple: They are among the top lobby groups in the nation.

From 2014, this screen shot about NASBE micromanaging Oklahoma: 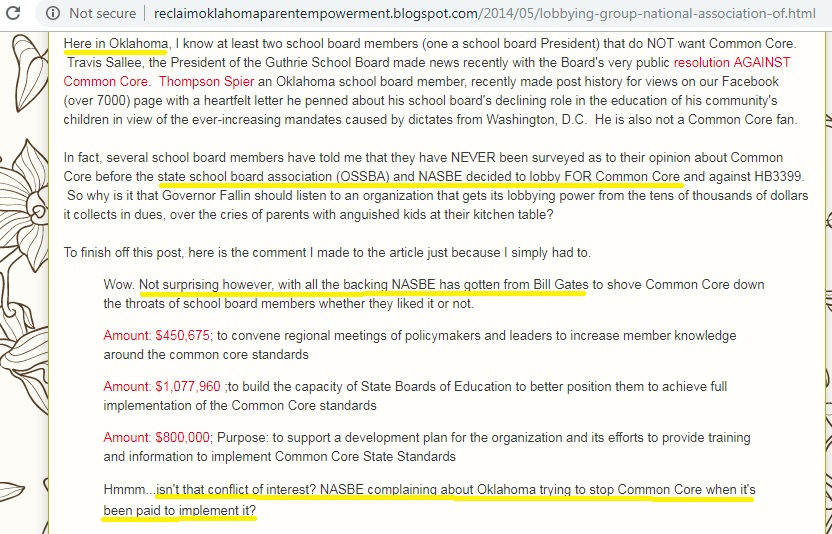 Related:
1) Wrench in the Gears blog, as mentioned on the Call. Alison’s work on BitCoins and the digital tracking like China’s social credit system are best explained here. Alison’s latest also exposed the global financing going on right now. The biggest connecting dot for you? The SIBs (social impact bonds).

2) Missouri Education Watchdog’s recent article is a huge connecting dot for you, as a Warrior. How? As Cheri (the author) puts it ‘the hypocrisy of Congress‘. On one hand Congress is hosting dog and pony hearings about the importance of privacy when it comes to the ‘data rape’, yet, has bill after bill promoting more ways in which to gather the data!

Warriors, William Lambdin’s Doublespeak Dictionary defines lobbyists as ‘stockbrokers of government who buy and sell freedom’. Do you see the problem with this? It totally strips ‘We the People’ of OUR power over Congress. We don’t need our freedoms bought and sold for us, we need to push back against NASBE. After all, they are not God. Neither is Congress. We don’t need MORE data rape! We don’t need more globally directed mental health or how to run our country! Look at the candidates and what groups are funding their campaigns! What are WE going to do about this, my friends and followers?! 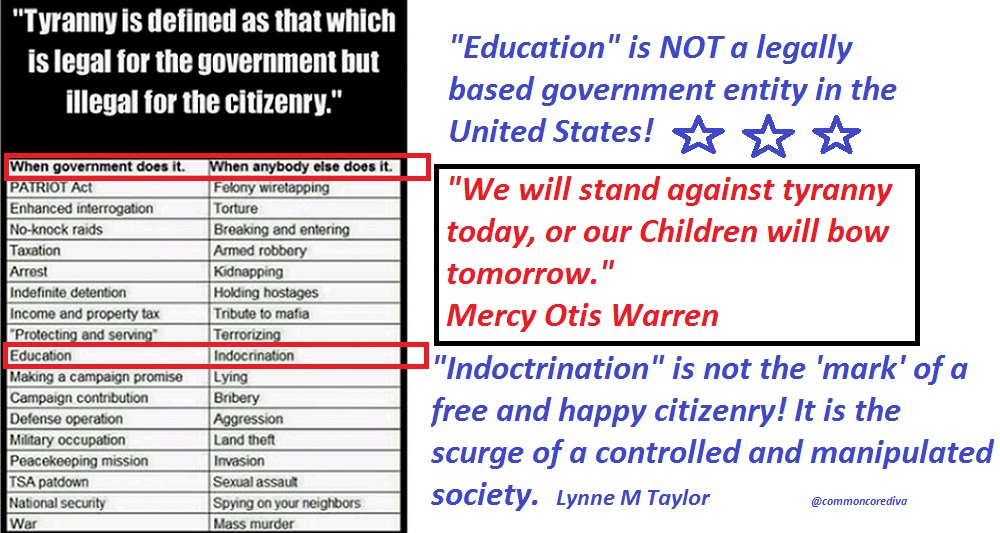