Trouble is, even Warriors Against CCSS, attended.

The Fork In The Educratic Road:

Warriors, what you see, above, is just one of the items which was up for discussion during the NASBE Conference. “College and Career Pathways “Integrate don’t Bifurcate”. This was spoken by Paul Miura of the Commonwealth of the Northern Marianas Islands.

The Commonwealth is a Territory of the US about 4, 000 miles southeast of Hawaii. Paul and his wife, Dr. Dora Miura, were 2014 Teacher of the Year and 2016 Teachers of the Year. Together, they are huge in the leadership of the Public School System (PSS).
(*Note: ‘bifurcate’ means to divide into branches in a verb form and in an adjective form it is ‘forked’. From the Latin for ‘2 pronged’.)

Now, what I’d like to point out, is that in researching Paul Miura’s background, the PSS newsletter I found, shows that the Islands appear to be (or were)  a ‘testing ground’ for all kinds of CCSS Machine overreaches.

There was the ACT/Aspire (career pigeon-holing exam), there was STEM (Science, Technology, Engineering, and, Math), there was digital device overload, high stakes assessments, the accountability for school climate (safety), and so much more. The Commonwealth PSS is also under the micromanaging thumb of AdvancEd.
The newsletter celebrated the passage of ESSA (Every Student Succeeds Act), as well.

Warriors, take the time to read the newsletter, you’ll learn quite a bit.

Warriors, what Miura is saying is that it shouldn’t be “College AND Career Ready” Standards, rather, ‘College or Career Ready Standards’. Meaning you could choose either track and succeed.

What this educratic BS REALLY means is this:
As a student, not knowing which path to take is UNACCEPTABLE. Taking a ‘gap year’? Doesn’t look like that’s an option anymore, either.

This is a blatant violation of freedom! No government, not even the STATE, should force students into a confined system. There are many students, young and old, who really do not know what they would like to do. It shouldn’t be the government’s job to steer them.

So, how’s this ‘bifurcate path’ playing out?
It was reported during the NASBE conference, that the State of KY is going to restrict graduation from high school for those who do not choose ‘college’ or ‘career’. KY is a member of the SREB (Southern Regional Education Board). SREB was also a presenting body at the NASBE Conference. 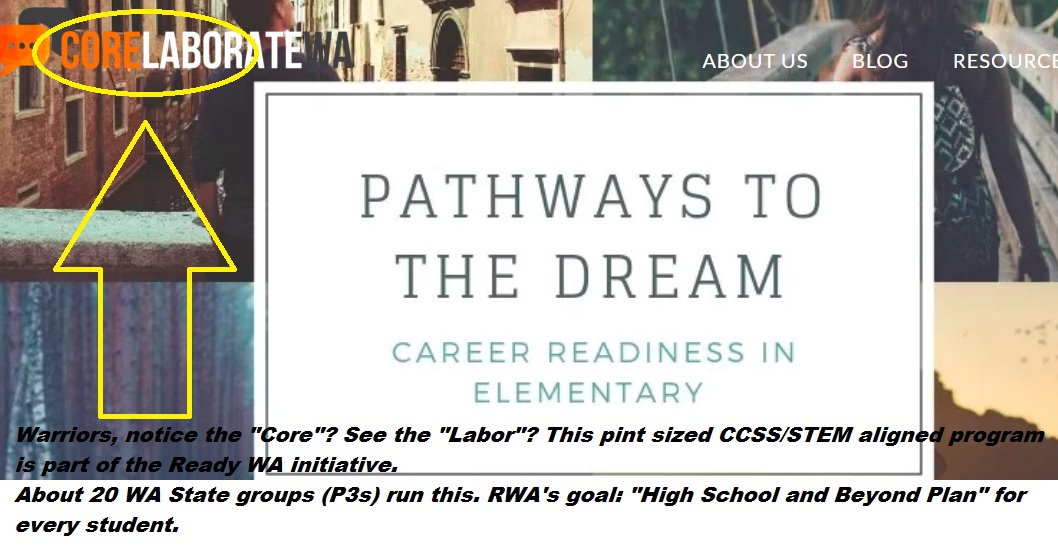 Warriors, in 2008, the Gates Foundation gave the IL State Board of Education a grant for ‘college and work readiness’. Since then, the University of IL’s Board of Trustees has received several grants. One of which (2018) for ‘post-secondary readiness’.

Is there a connection to the IL State Board of Ed? Sure! The 2018 grant is to complete an initiative of the University for Community Colleges and pathways to careers.  It’s called OCCRL, The Office of Community College Research and Leadership. The OCCRL is in the P-20W data tracking. (Preschool to college completion and/or workforce data tracking.)

Bring In The Professor:

One big presenter at NASBE was Professor Micheal Fullan,O.C. (Officer of the Order of Canada)  He’s also a global competency guru as well as one who spews ‘deeper learning’ rhetoric. He’s also considered a leader in education reform. Among his CCSS Machine shared information, he showed this to those attending the Conference:

Warriors, what the Professor didn’t share (that I could find) was the 6 Global Cs are tied to the Global 360 Education Model for Citizenship. I covered that earlier this year.

Warriors, you know FERPA (Family Educational Right to Privacy Act) was created to help protect families from data mining, right? You also know that the FERPA was weakened considerably back in 2011 to allow massive of data mining to commence.

Every year, since then, the data mining has turned into ‘student data rape’ simply due to the amount of personal private information taken without consent or knowledge. It’s awful! You also know that recently I’ve shown you how the federal government has already earmarked several million of taxpayer dollars to increase the data mining, especially for mental health services. So, look at what NASBE just ‘happened’ to have as a Conference session: 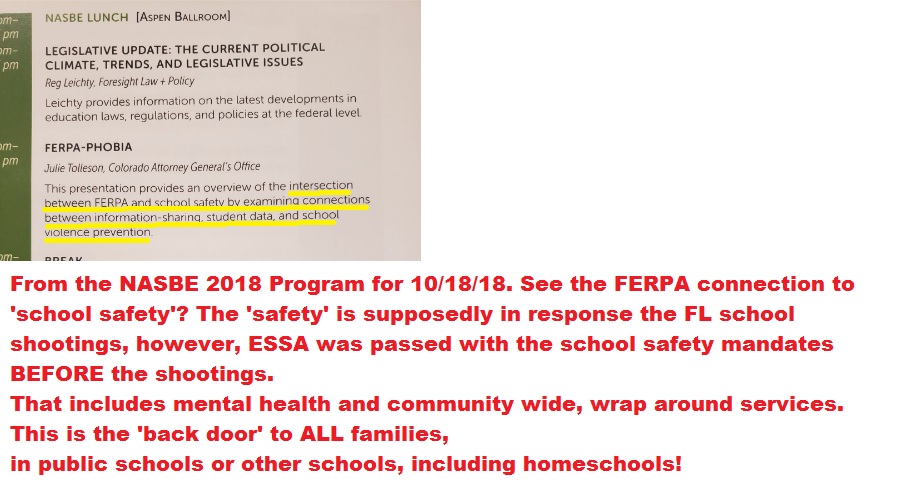 So, how do data mining, mental health, and school safety intersect? Funding is the biggest tool. Also, as far as the CCSS Machine is concerned, if a student is identified as a school violence risk, interventions ensue. Anytime medical services are given at schools, 21st Century Community Learning Centers, or in doctor’s offices using IDEA funds (IEP services, IEPs include behavior interventions. Under ESSA, those interventions are SEL, social emotional learning tied to the UN’s mental health targets) or FAPE (Free Access to Public Education) funds (504 services), or even your insurance,  FERPA and HIPPA come into play. (HIPPA stands for Health Insurance Privacy Protection Act). On October the 19th, during the NASBE Conference, FAPE funds and IDEA funds were discussed by a CO based law firm. (Caplan and Earnest). While I have no idea of the words spoken, I can show you a Jan. 2018 blog post from the firm about FERPA and what contents can be shared without the parents’ consent.

Back in 2014, the Parental Rights group warned us of the intrusive questions that were being asked of the kids while the parents were being barred from the room.

Think about the vast amounts of money the federal government has spent since 2014 to upgrade and increase the streamlines of data on patients. (ie: have you been asked by your doctor to get signed up for automated records? Once in that type of system, everything about your health is tracked and shared.) Think about the increased amount of questions and/or their content.

If you’ve not seen the vast amounts of loopholes FERPA has right now, you’ll need to read them! Enough to fill two pages. Notice how each of these loopholes do not respect what school you do or don’t attend. (*Note: this document also gives you the link the Obama Administration’s gut job on FERPA.) That ‘gut job’ is what carried over into ESSA
(Every Student Succeeds Act). ESSA is what NASBE was using as its kingpin during the Conference.

Warriors, then there’s this:

You know, I’ve been dedicated to bringing to you HOW all of our educational choices have been and are being negatively impacted by the CCSS Machine. Homeschools have always been in ESSA’s grasp, the Conference just helped confirm it even more-so. If you’re still not sure how vast the data sharing is from a health perspective, please look at the featured picture in the header.

Related Resources:
1) In 2015, I showed you the P-20W was inserted into waivers States were given. The trade off was: harvest more data and receive more CCSS aligned rigor. This article is dated, but it can help you trace where the data tracking is hiding. In 2018, we know that not only the ESSA mandates have this system, but that our federal government has inserted all kinds of back door P-20W tracking. The warning: the data goes global.

3) Did you know that the U.S. Dept. of Education had also proposed expanding the SLDS (Student Longitudinal Data System) in relation to FERPA? This was back in 2011. If you’d like to see the evidence AND find the comments made for or against the proposal made at that time, go here. It would be interesting to compare the US Dept. of Ed’s proposal to that of President Obama’s FERPA gutting Executive Order. Also along this line, the Parent Coalition for Student Privacy has a good timeline of how many times FERPA has been weakened along the way by the U.S. Dept. of Education. Because FERPA has rendered parental rights almost down to nothing, we MUST demand FERPA be restored to its original state.

4) From earlier this year, testimony before the Federal Commission on School Safety (Part of the U.S. Dept. of Health and Human Services), is this. Basically the expert called in supports FERPA’s data being shared with anyone, anyplace for the sake of protecting a child’s well being, both physically and mentally. He argues that without shared data between schools, law enforcement, and others, that children cannot be protected from danger, even inside their homes.

5) On Oct. 17, 2018, the Women on the Wall’s national conference call tied much of what NASBE was promoting  (data mining, SEL, alignment to the UN) without knowing it! Talk about providence. Take a listen and share. Then compare that call with the evidence above.

6) EHealth, HealthE Schools, or TeleHealth and how it connects in a “Roadmap” form, this will be from a pro CCSS view. My research will show the anti CCSS side. (*Note: be sure to look at “Related Resources #1, 7, 9, and 10)

7) The ‘latest’ challenges the government faces for HIPPA.

Warriors, as you can see there was quite a bit going on at the NASBE Conference. It appears not any of it was good. However, again, thanks to those who went in as Anti Fed Ed Warriors, we have much to learn from. I’m not done, either. There are a few more NASBE related items we need to learn about. Use this article as a study guide, or break it into sections and re-read them. I’ll be back next week with more. 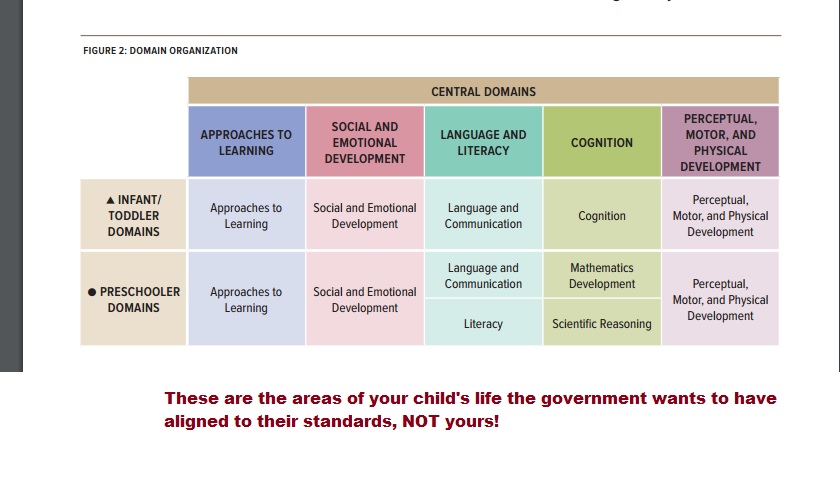