**Third in a Series of 116th Congressional Bills overreaching into education

By far and away, the most ‘picked upon’ school subject shoving the CCSS Machine agenda down our throats is SCIENCE.

Fast forward to near the Renaissance time and secular humanism entered the picture. This was the very beginning of divorcing God from science. To this day, there are many who embrace that science is more credible than God. Vice versa, those who still regard science as a way in which to discover and better life, see the two as intertwined.

The reason this type of context is important leads to our modern day education reform which so pivots off science.  The ‘teaching’ of science has become a former shadow of greatness.
Science, especially as the UN (United Nations) and UNESCO have spun it, has BECOME a god.
Why does that matter in the US?

IF you’d like to see (for the first time or as a review) my extensive amount of research into how embedded the U.S. Government, including Congress, has made STEM/STEAM. Here is the link  for STEM/STEAM/UNESCO (2 pages). Here’s the link for STEM/STEAM/UN (7 pages).

Below are the most relevant which will connect to the new Bill from the 116th Congressional session.

From 2015, the traceable connections from the CCSS to STEMtoSTEAM shift for every single educational choice and age available in the United States.

From 2016, the CCSS and UNESCO ideology match to incorporate STEM into CTE (Career Tech Education), CCR (College and Career Readiness). Next Gen Social Studies and Next Gen Science would follow suit. The crux of the ideology? Collectivism in life, belief, and action all to sustain the Earth.

From 2018, how BOTH major political parties have inserted, supported, and, codified UN agenda into US legislation and programs to usher in STEM/STEAM via infrastructure, as well as education.

From  August 2018, the FY 2019 STEM budget earmarked $150 million from one Chamber of Congress and $160 million from the other. Then, add in an Executive Order expanding apprenticeships which include STEM/STEAM.

From October 2018, how STEM budget money and programs stoop to exploit gender, involve social impact bonds, and, create havoc in education as well as the nation.

Meet The Representative Behind HR 627:

HR 627 was introduced by Rep. Rob Wittman of VA. Below, is a screen shot from Rep. Wittman’s Congressional website. (*Note: the added rhetorical question is one I’ve longed to ask EVERY Congress member and President since 2009!!)

Of Rep. Wittman’s “Issues”, education is dead last on the list. However, the Representative does brag about his service during the 115th Session in pumping up CTE and STEM for education.  I encourage you to enlarge this screen shot or open in a new tab. The dynamics of the language used is almost comical, if this wasn’t so tragically real. 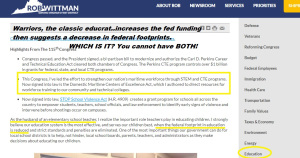 Warriors, this House of Representatives Bill is called the ‘STEM Research and Education Effectiveness and Transparency Act’. HR 627 is  5 pages long. It’s currently in the House Committee of Science, Space, and Technology.
1) As we’ve seen so many times in STEM/STEAM related initiatives, programs, funding, and bills or laws, HR 627 targets women and under-served minorities for STEM jobs and careers.
2) It directs the NSF (National Science Foundation), to direct the entire program being expanded (ie: bigger government overreach). It was the NSF, the UN influenced to force STEM into President Obama’s agenda which has been extended by President Trump.
3) Involves any US federal agency with $100 million in FY 2019 Research and Development earmarked funds.
4) Ties to the HEA of 1965 (Higher Education Act, currently being updated for a renewed passage). Grants and merit awards in Research/Development will be given for STEM in higher education and government jobs. Any federal laboratory job awarded or given under HR 627 parameters are defined by the Stevenson-Wydler Technology Innovation Act of 1980, Sect. 4.* (a brief explanation of what the public law established is below.) What HR 627 will do is EXPAND upon that foundation for use in #5.
5) Expands the data tracking of students as well as economic and demographics. (aka: ‘data rape’).
6) Expands the NSF power and authority (an independent US government agency). The Director of the program HR 627 sets up will be housed in the Office of Science and Technology Policy (Executive Branch).
7) Includes the Congressional catch all phrase ‘and other purposes’.
8) No less than 1 year after HR 627 is made into law (if it survives), the NSF will report (per the Section 37 of the NSF Authorization and Science and Technology Equal Opportunity Act; brief explanation below) to Congress how effective efforts to target women and underrepresented populations have been. Whatever efforts have been successful will be credited to the universal streamlining of data. What isn’t successful will be tweaked and streamlined. ALL data will backtrack to the past 5 years as well.
9) Defines STEM as per the America COMPETES Act, 42 U.S. C. 6621 note (description below) of 2010.

i) Stevenson-Wylder Technology Innovation Act of 1980 established technology centers around the nation to support the innovation in commerce, economics, environment, and social well-being of Americans. Here’s an excerpt from the Public Law 96-480 ” Cooperation among academia, Federal laboratories, labor, and industry, in such forms as technology transfer, personnel exchange, joint research projects, and others, should be renewed, expanded, and strengthened.” Section 4 (page 2), defines the Secretary of Commerce is in power. Also defines ‘non-profits’. Education is thrown in, too.
**HR 627 will double up on the data sharing.
ii) Public Law 96-516 (“National Science Foundation Authorization and Science
and Technology Equal Opportunities Act”.) stated that beginning in 1982, every 2 years the NSF must include the U.S. Dept. of Education, U.S. Dept. of Labor, the U.S. Dept. of HHS, and others in its data reports.
iii) America COMPETES Act of 2010, 42 U.S. C. 6621 note basically made STEM a federal entity with its own law, funding, activities, and more, especially in education. Public private partnerships (P3s) were also included. The 2010 Act (scroll down to the summary) was a re-authorization of an earlier COMPETES Act. “COMPETES” is short for ‘Creating Opportunities to Meaningfully Promote Excellence in Technology, Education, and Science’

(*Note: there was an America COMPETES Act 2015 version I wrote about, which also can be tied to the HR 627 above) 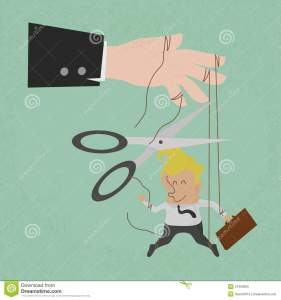 Warriors, I hope you can see that once again, the 116th Congress isn’t really promoting excellent education or terrific jobs. This entire series I’m writing all has ONE word in common: data. HR 627 expands government, but it also expands the data tracking, BUT it’s using STEM to accomplish it.  As was written in the 2010 PCAST Report about STEM:  it would make us STEM people in a STEM nation with a STEM workforce for a STEM economy to gel with the globalism. How’s that for making science a god and turning us into minions, not free willed people to bow to the UN’s agenda?! This is what your federal government of the US has set into place.

Next up in this series: the GREAT Act(s).