Anti Fed Ed Warriors, in my last article, I showed you the at least 20 year old movement to ‘expand time’ in the name of ‘education’. If you read that article, you saw that the goal wasn’t a true academic advancement of oneself, it was more about a student/worker hurried up and churned out as a ‘competent’ skill based apprenticeship leading to a job.

However, what if I showed you, there’s a much more devious plan afoot?

Warriors, we once experienced history where Germany attempted to ‘rule the roost’. If you’re like me, you weren’t born then, so you didn’t live through those horrors.

Immediately after World War II, America was one of the 4 countries in control of the restructure. Many years later, the changes which were made, showed through in education. How? By way of the economic structure, the corporate structure, and, the government structure changes.

Yes, the US was involved in the German restructure by pushing for ‘democracy’. Since America’s a republic (by our Constitution), I wonder what would be different today, had the push been for a ‘republic’. 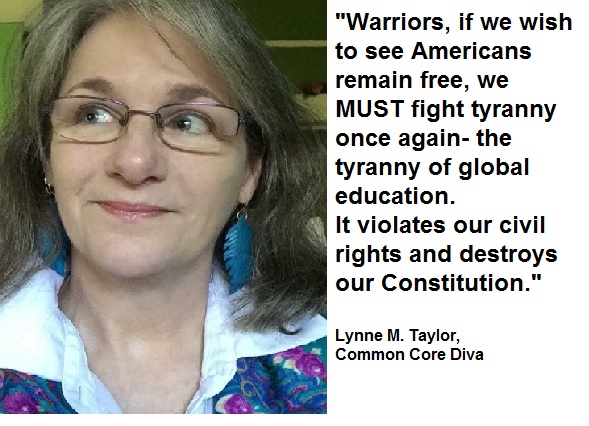 So, imagine, that in 2019, in America, some of those very Germanic restructured roots showed up. What would you do? What has OUR government done? What has OUR economy done for education? What has OUR corporate structure accomplished?

Warriors, if you’re like me, every time you hear certain words, you cringe. Especially when you research items. You may also be like me, and see the larger picture looming in the background because you’ve seen so much. Case in point, “Competence”.

****If you choose to access the German/Latin roots, you may need to use your internet tool for an English translation.*****

My fellow Warriors, you know how I’ve shown you, over the years, the word games used against us. I’m not assuming every educrat in DC or your State knows the watered down English version of ‘competency’; but knowing it has more to do with other things than true academics, do you see how it’s been used to further the agenda?! 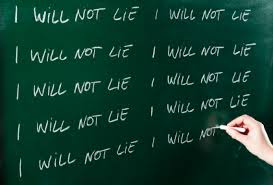 Look at it this way, ‘CBE, competency based education’: NOT ‘expert’ based education or ‘skill’ based, BUT ‘legally controlled and authoritatively carried out’ education!!

English speaking countries may mean ‘skill based’, but NOT “expert based” or ‘legally/authority based’.
But, if the educrats did mean one version, and, assume you and I believe the other, then it’s the Latin meaning of ‘clashing’.

It’s also a ‘classic set up’, we’ve seen the CCSS Machine used repeatedly, you look one way, while I undermine the other way. 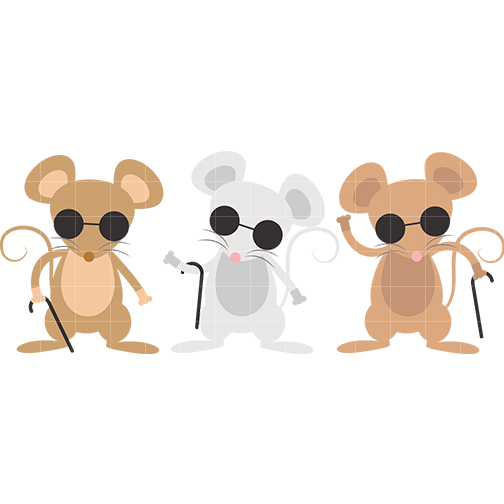 So why, in the context of ‘competent’, would the German version be more accepted and in 2019?

****Because it is the closest to align with the UNESCO/OECD* plan for authoritatively controlled workforce based training NOT academic prowess!!****

Warriors, why would it matter what the German usage and meaning of ‘competence’ really stands for? Because when it’s accepted as their nation sees it, it’s about a collective reflection of education interests of the society….not each student.

This is an approach DC has been taking for years. Especially since the Johnson Administration straight through to the Trump team.

Come with me, Warriors, as I show you the German model America has heartily set us up to embrace without hesitation. (How much of the current system is based off Hitler’s? Read and find out.) 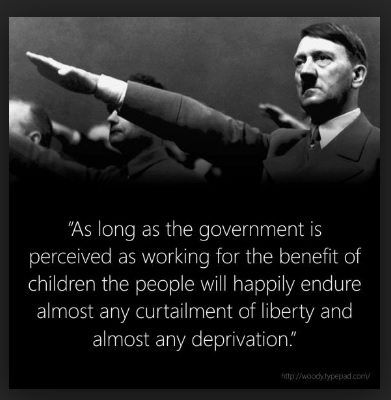 Warriors, Germany still calls education which trains you for a job or a trade as vocational education. Americans called it ‘vo tech’.

Some Americans, to this day, believe ‘vo tech’ is not only still an option, but should be taught. In 2006, that term ‘died’ and was replaced. (Yes, Warriors, another word game.)

That’s when our US government changed what the definition of ‘vocational education’ was. The ‘training’ portion was also redefined. How? The government funding!
However, even the CCSS Machine still uses ‘vo tech’ in America to confuse us! 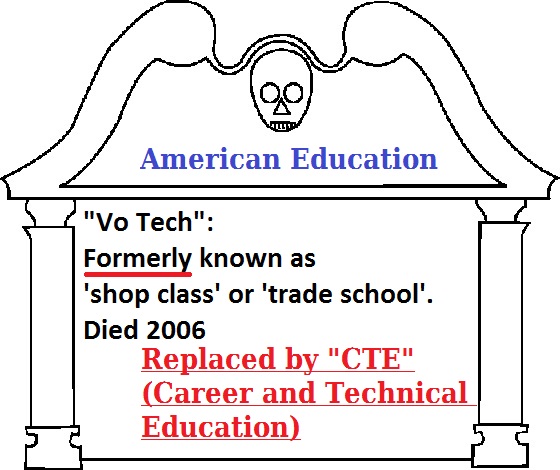 Congress, at least, has finally stopped lying about how education is seen. Look below, this sentiment is readily spoken and shared by BOTH major political parties: 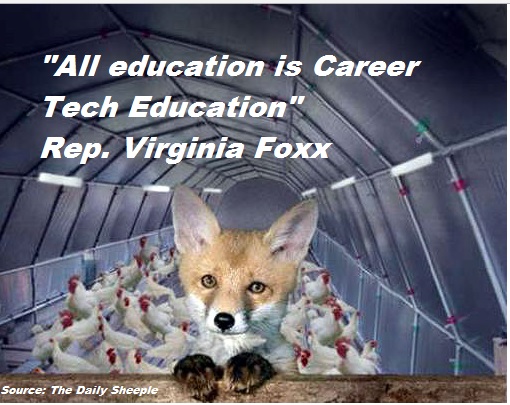 Warriors, I found this undated (appears to be very recent, though) commissioned study by Bertelsmann Stiftung (an education based social change group. They heavily support a ‘school to work’* concept.) But, it’s WHERE I found it, you will be interested in. The American “National Career Pathways Network” website.
(*Something we’ve seen DC embed for years now.) 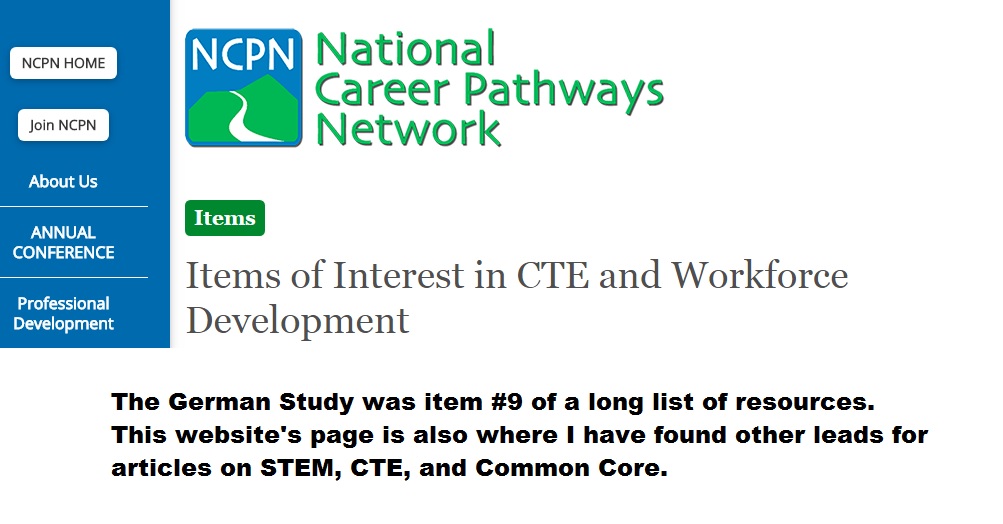 The German Study features an ‘expert’ from Germany who is considered the ‘go to’ guy on vocational tech training. His name is Professor Dr. Dieter Euler. He’s known across the world as the specialist for reforming vocational tech systems.

(Link to the complete Study)

Link to an abstract paper on the EC’s “Rethinking Education”

Some Of  The Study’s Points:

Warriors, I’ll share some of the most troubling points from the Study. I trust you can see the ways in which our nation, our government, and, our corporate overreaches have set the same shift up in American education. I encourage you to read the Study on your own.

1) The shift to work based learning (also called dual enrollment) should be the main focus of vocational tech/training. The main target? Citizens under 25 years old. (Page 14 has a brief history of combining education and work.)

2) Many countries are looking at the success of Germany’s system because it’s been spun as a ‘win/win’. Students get fast tracked education, employers get trained workers.

3) America’s not as developed in dual vocational tech, yet. But, the shift is being increased with ESSA (Every Student Succeeds Act) and its embedding of STEM (Science, Technology, Engineering, and Math), WIOA (Workforce Innovation and Opportunity Act), and HEA (Higher Education Act).

HEA is currently the last national US law to receive the ‘school to work’ makeover. Congress is dead set on increasing  the German based concepts. How? Increased CTE (Career Tech Education), which replaced ‘vo tech’, increasing apprenticeships and internships, increasing dual enrollment, and anything connecting them all.

4) The 11 Vo-Tech Reform Components can best be accomplished in ‘incremented innovation’ programs and learning. The shift in education and work training is also metered out in ‘incremented segments’.

5) Other concerns include which government or business group is in charge of  exams for certificates and degrees. In Germany it is the Chamber of Commerce and Industry as well as the German Confederation of Skilled Crafts. You’ll find this laid out in Germany’s 2005 Vocational Tech Training Act (Sect. 1, Paragraph 3); Austria’s 2006 Vocational Tech Training Act modulized certain jobs (meaning the selected jobs were taught and trained for in modules, or fast tracked pathways).

Switzerland’s cantons are in charge of all vocational based exams. (In America, we are divided into States, Swiss has cantons.) Cantons have their own government set-up, but they cannot contradict the federal confederation.

In the Netherlands, they are receiving lots of global attention in vo-tech education. Why? Their 1996 Adult and Vocational Technical Training Act * merged education and labor into 2 training tracks. One was/is school based, the other is dual workforce training (or vocational tech training). *See Point 2.4. Notice the regional vo-tech training centers.

All the countries mentioned above are using national credentialing systems. Why? The ‘big essential’ is ‘real life conditions’ can best be experienced in dual vo-tech training, not necessarily education (you’ll see that referenced on Page 30.)

Not from the German Study, but definitely related is the 2012 “Roadmap to Vocational Education and Training (VET) Systems Around the World“.

Warriors, every ONE  of these are things are either already in place in America, or the framework is being laid out!! How? College and Career Readiness via ESSA, WIOA, HEA, and more!

The screen shot below is from an old article of mine on apprenticeships in America, but notice the wrench and hammer symbol.

Study Warning Bells For Us:

1) By government and business ‘rule’ a ‘consensus principle’ will be put in place.
2) By government and business funding, education and training, especially for jobs will be ‘easier’. But at what cost of our freedoms will this be?
3) “Industry specific solidarity contributions”. What will these look like? Grants for apprenticeships!
4) A merger of economics, family, and youth via integrative vocational training (Norway has had this since the mid 90s).
5) A ‘flexible’ vocational education/training track for disadvantaged citizens.
6) “Quality standards” for vocational tech training and education mean laws, not scopes and sequences we’re used to.
7) Teachers and Trainers will have government controlled ‘hoops to jump through’. Their section begins on Page 52. Look for the “Ordinance on Trainer Aptitude”. Then, read what the UN (United Nations) has on this.
8) Class size changes will occur. Being done away with are the large, teacher led classes. What the shift to vo-tech training will produce (already in use in Denmark) is small ‘hubs’ or groups. These groups will spend 5 weeks at a time on one module, then switch to another. A large ‘completion logbook’ is kept on each person. This is their version of ‘personalized learning’.
9) Expect more ‘education research groups’ and ‘vocational analysis’. Germany’s model has been deemed so successful because all the reform is based off ‘in-depth’ research. 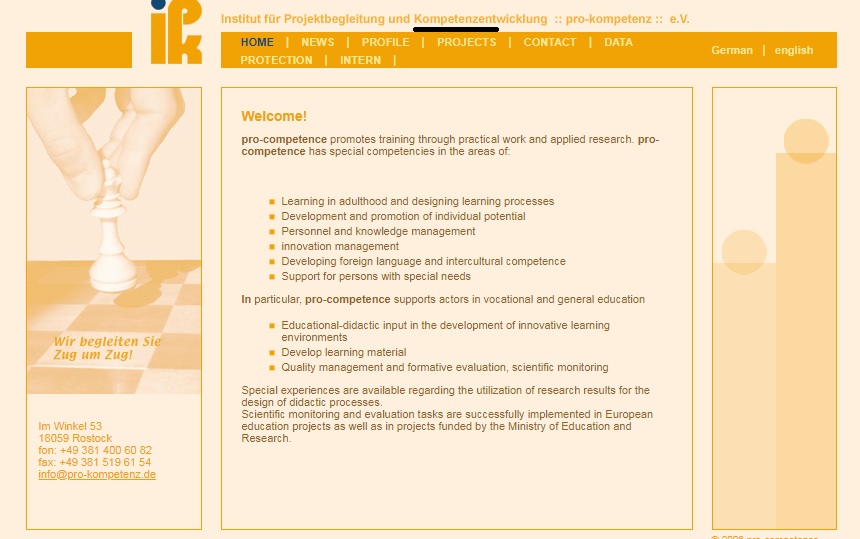 I was curious as to what other reforms this German ‘expert’ has been a part of.
Here’s what I found:
A) From 2006, A Swiss paper on ‘E-Learning’. A mandate for vocational training/education to be including in the SVC (Swiss Virtual Campus).
B) From 2010, Euler’s paper on developing and transitioning vocational technical training and demographics. He predicted a labor shortage by 2025. Below is the screen shot for the 2013 Journal/Report in appeared in.

C) In this undated McMillian Publishing proof, Euler was a contributor. So was the Aspen Institute. Euler’s topic was ‘Reflective Executives: A Realistic Goal for Modern Management Education’. A brief summary (Page 11) of Euler’s work reveals that ‘management education’ is more of a control tool, than it sounds.
Aspen Institute wrote on 2 different topics. One was on business and its relation to social and environmental issues, the other, “A Closer Look at Business Education: Sustainability in Curriculum”. This book was written exclusively for an audience of humanism followers. Warriors, it’s important to note that much of the UN’s overreach into education is rooted in humanism.

D) From 2013, The Routledge Companion to International Management Education had Euler write on “Reflective Leadership: A Vision for International Management Education”. As you can see (below) ‘international management education’ is tied to the UN’s design via the GRLI (Globally Responsible  Leadership Initiative). This screen shot is a bit hard to see, so be sure to go to the link above and read it there. When you read the GRLI and related information, you’ll see international managed education is NOT about training or educating people for managerial employment, it’s about controlling education altogether!

Warriors, with the process for the HEA heating up before Sen. Lamar Alexander retires, we have got to inform our representatives and senators about what they are supporting and trying to further. We are America, not Germany 2.0!  We are free Americans, not UN led-by-the-nose citizens!

With all that you’ve learned in this article about the words being used against us, you know the UN/UNESCO/GRLI attempts to fast track apprenticeships (like Citizen Schools and the German model) will be lumped in under ‘lobbyists’ and ‘special interests’. 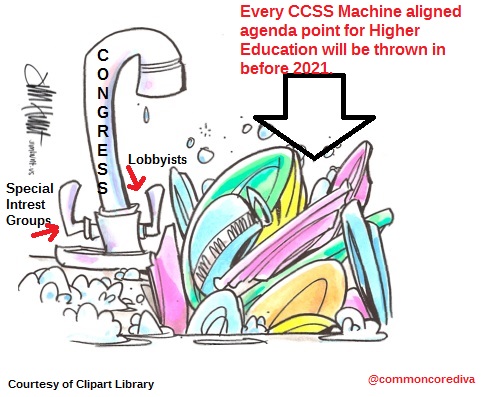