Anti Fed Ed Warriors, thanks for hanging in with me during this tough series. As hard as it is for you to read, it’s been even tougher choosing to share the evidence and truth. It’s not for fame or glory, though.

As I’ve stated repeatedly throughout this Prudence series, it’s about our kids. It’s about our freedoms being preserved. It’s about being sick of being lied to about how caring these politicians are where our education is concerned.

Well, we’ve made it through the Senate candidates (Part One), the Representatives and former administration leaders (Part Two), we’ve reviewed President Trump/VP Pence’s actions (Part Three). Today’s (Part Four) will take on the state level and local level politicians. Tomorrow’s (Part Five) will round out the 2020 Presidential candidates with the private citizens and general election information we all need to know.

Before I share the chart concerning these people’s views on education, let me remind you of the image I shared about them from Part One’s Prudence Files: 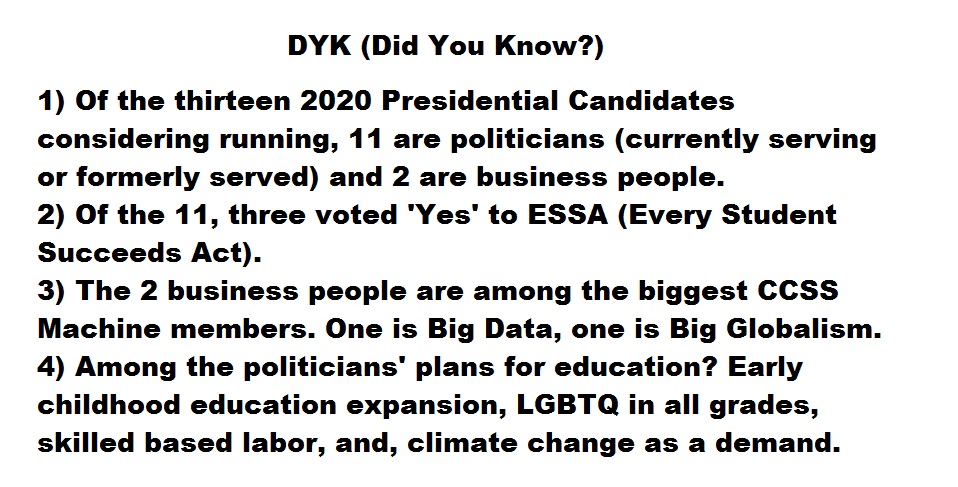 Here’s  the short version of their education stances:

Here’s information about Hickenlooper from “On the Issues”. As Denver’s mayor he expanded early childhood education and increases CTE (Career Tech Ed), as CO’s Governor, skill based apprenticeships, and P3s (Public private partnerships) between businesses and schools are the only way to improve the economy.

Inslee’s plans for the nation will mirror what he’s done in WA State. More career pathways. I’ve written about the cradle to grave WA program, and, their mental health overreaches in education.

Weld’s stance can be heard from his own lips: he’s a fan of high stakes assessments; wants ‘school choice’, to close US Dept. of Ed, to have skill based workforce education, and to have the federal government take student debt. Now, the irony of this is Weld stands staunchly on the importance of honoring the law. HOW can you support education reform that is illegally based? Sure, close the US Dept. of Ed AFTER you repeal ESSA!

Messam’s campaign would have the US government forgive ALL student debt (in the trillions), assume that debt and thus, kick-start the national economy. Green schools filled with STEM, P3s, as far as economics/jobs? Career paths. His website can be found here.

Castro’s design is to make education an issue in the election. As President, he’d have Universal Pre-K for all, free tuition for public colleges, have Medicaid for All (remember Medicaid funds are part of ESSA mandates), and likely raise taxes to pay for it all. One other tidbit, he’s got a brother in Congress (House). Joaquin Castro is the co-founding member of the PreK Congressional Caucus. His attempt for PreK for USA Act sought to totally bypass the State level of government to gain access to federal dollars for universal PreK. In 2019 even without the passage of (brother) Castro’s bill,  PreK Development Block Grants under ESSA are directly related.

Buttigieg’s overreaches include school vouchers (willingness to allow ‘new things’ to be tried in education, as well) and climate change/Green New Deal (already in education), according to the On the Issues website. According to Elle Magazine’s article Buttigieg wants to include Big Unions in labor for the economy’s sake. From McKinsey, Buttigieg (as mayor) supported government Big Data (think about how disastrous Big Data/Tech is in education). Where would he most use Big Data? Jobs and economic development! One of Buttigieg’s ‘best buddies’? Mr. Facebook himself, Mark Zuckerberg (CNN)  As we know, Warriors, Facebook is a huge CCSS Machine member group!!

If these items weren’t bad enough, some of my fellow Anti Fed Ed Warriors have shared some other very disturbing education related ties to Buttigieg:

To see the OECD’s document on global lifelong learning cities, visit here.
To learn about Drucker’s Social architect concepts, go here.
To see the IMS (International Gamsci Society) and Buttigieg’s father, that’s here.
Visit Google for their information from above (be sure to find Mayor Pete’s picture with the children).
If you’d like to see what a Lifelong Learning Systems City will look like, go here.
As far as Pearson’s Gender Intelligence, I wrote about it in 2016.
To see the Drucker/Tavistock Inst./Freud information (from Warren Bennis’ book where he reveals his relationship to all this), go here. (*Note: Bennis is also featured in an article tying him with Peter Drucker. That article is on the Clemmer Group’s website.) Here’s another book Drucker/Tavistock were featured as consultants.)
To see the Tavistock/Columbia ties, that’s available here. (*Note: the other Ivy League schools involved as well, especially Harvard. Warriors, look for another article on this messed up educratic debacle in the near future.)
********************************************************
Warriors, for those candidates who may run, I’ve given you a good lead on how they would impact education.

But do any of these candidates, running or considering have CCSS Machine funding? Let’s see.

In this series about prudence, Warriors, you’ve seen the big bucks the CCSS Machine has used to basically buy these leaders to accomplish the global alignment of our nation, especially through education. So, like the previous articles, we’ll use Open Secrets (Center for Responsible Politics) for most of our campaign donation information.

Warriors, I’ll admit, finding campaign donation information on most of this particular group of candidates has turned up little. However, I’ll share what I did find:

Inslee’s last campaign found Microsoft as its top donor; then there was Big Law/Big Unions/Univ. of WA/Big Pharma, and the People for Patty Murray.

Kasich’s last campaign had massive amounts of money given by Big Investors/Big Finance, and Big Law.

Abram’s last campaign had many donors. Of them, these are the most noticeable CCSS Machine members: Planned Parenthood, Nancy Pelosi’s Campaign, Big Unions, Sun Trust Bank of GA, and Sen. Cory Booker’s Campaign.

So, there you have it, Warriors, all the politicians, current and former; from the State House to the White House and Capitol Hill. In the final ‘Prudence Files’ article, we’ll look at the 2 private citizens seeking the Oval Office and wrap up with citizen action steps and other election information.

I hope you will use this article and the previous 3 to arm your family, friends, and neighbors. These Presidential hopefuls are not the best America has to give back to her people, at least as far as education.

When you consider the UN uses education in America as its change agent, think back over all I’ve exposed that these candidates WANT to embed (or further embed).

That’s a very scary future for our nation, isn’t it? Our American freedoms are in sure dire risk of 100% removal. We don’t need to think all the ‘isms’ besides patriotism aren’t already here. They are, in living, breathing, and powerful ways.

We don’t need to be reassured there’s no way those ‘isms’ will over take us, they already have.

If you look back at the ties to Buttigieg, look closely, our churches have been overtaken in all this, AS well as education. However, Buttigieg isn’t the only one candidate we’ve got to contend with.
Could this answer WHY so many churches and pastors have stayed away from protecting their flocks where education is concerned? I do know from research, a number of churches have opened their doors to STEM quite happily while not really warning anyone about the CCSS Machine.