Anti Fed Ed Warriors, “Earth Day” was just a few days ago, and “Earth Week”  ended on April 19th, 2019. While I will eventually tie this back to education and the CCSS Machine, bear with me…

Both “Earth” events are totally in sync with the UN’s SDGs (United Nations Sustainable Development Goals). If you didn’t know this, “Earth Week” has been around since 1988. “Earth Day”, since 1970.

But, wait, the SDGs came years later, how can any alignment be true? According to the “About Us” on the official Earth Day website (embedded above), the entire movement went global by 1990. About 190 countries hopped on the ‘environmental savior complex’ bandwagon.

This article from Technocracy News even gives you ways to spot the climate change propaganda. It also shares WHY the UN is pushing this envelope.

Even for some of those who do not believe in ‘God’s supply’ have acknowledged that sustainability tied to the climate change is a farce and will harm us tremendously more than if we simple exercises stewardship.

This website even calls climate change a ‘culture war’. One which 2019 politicians are all too happy to magnify.

Warriors. For the remainder of this article, I want to lay out a a trail for you which leads us to the 116th Congress and Senate Bill 729 (Sen. Schumer, NY).

Seeking to find the truth after former Vice President Gore declared a ‘global emergency’, was this Senate report. Very credible scientists were included. 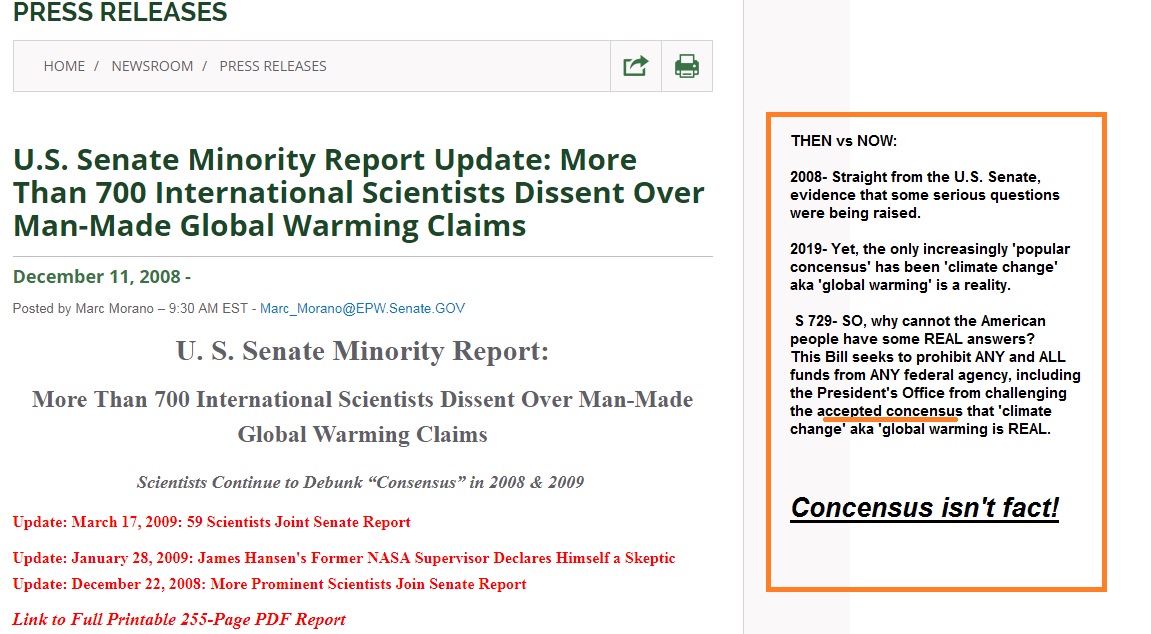 (Source; emphasis added is mine)

Sure, we know VP Gore was a Democrat, but look at the 116th Congress and BOTH Republicans AND Democrats are preaching the gospel of peril and doom for the world. WHY? What’s changed?

We have seen Congress go from ‘let’s find the truth’ to ‘let’s censure truth’.

From 2019:
Sen. Schumer (NY) is the sponsor of this bill. There are 16 co-sponsors. Two are 2020 Presidential candidates (Sen. Booker and Sen. Klobuchar). This Bill has no short title, but is worded so that the Senate AND the House will unite on this. So, what IS the name of S729? 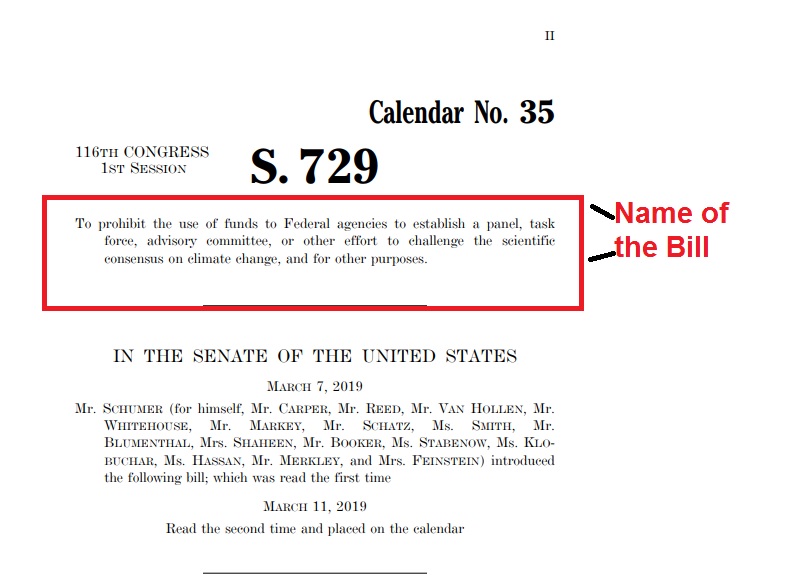 S 729 doesn’t allow for research which would confirm or deny TRUTH. It only wants the ‘scientific consensus’ about climate change to be the truth. Why is that a problem? Because, as in 2008 until 2019, the scientific consensus has not been 100% united in findings or beliefs! 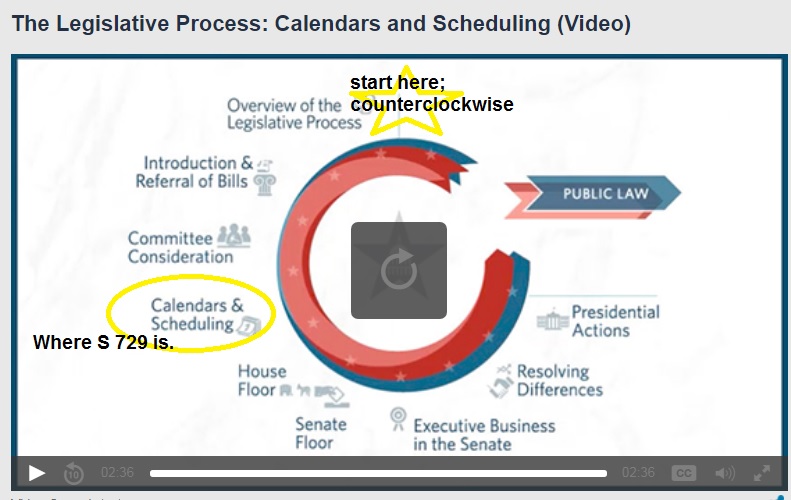 Congress.gov has a website video explaining what it means when a Bill is on the calendar. According to the video, calendar items may or may not ever be heard on the floor, BUT, it depends on the topic. Warriors, it doesn’t take rocket science to know ‘climate change’ is a HUGE topic. We also know (as it was featured in my “The Prudence Files” series) that ‘greening up the US’ (‘climate change’) is a BIG issue for all 20 Candidates, including our current President. If you look at their platforms, each of those seeking the Oval Office have a plan for their ideas. Take the time to read those ideas and they are ALL the same! 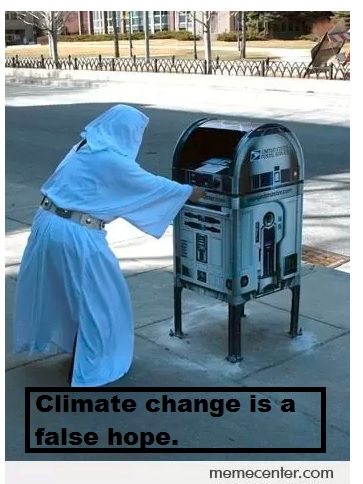 Warriors, beside from prohibiting use of taxpayer funds to study the validity and course of action based off results, S 729 ties back to 2 other federal laws.
A) The Solid Waste Disposal Act of 1965, amended 2018.
B) The United Global Change Research Act of 1990

What did “A” set out? A plan for the US to find ways to reduce waste, especially dumping sites. By being amended, that ‘innovation’ shift was added. This means that not only do we need to reduce waste, we need to re-purpose the waste. It also put the EPA in charge as the ONE agency which would administer any programs, initiatives, or activities for solid waste.

In S 729, Sect. 1004 of The Solid Waste law is cited. That section is the definitions for every conceivable way in which waste disposal and all that connects to it can be adjusted to fit an agenda.

What did “B” set out? This law created 4 year reviews of the effects on global changes. What would be reviewed? Agriculture, the natural environment of America, our energy production and use, our land and water resources, our transportation system, Americans health and welfare, American social systems and our bio-diversity. Here’s the 2014 (latest available) of the US Assessments by region. 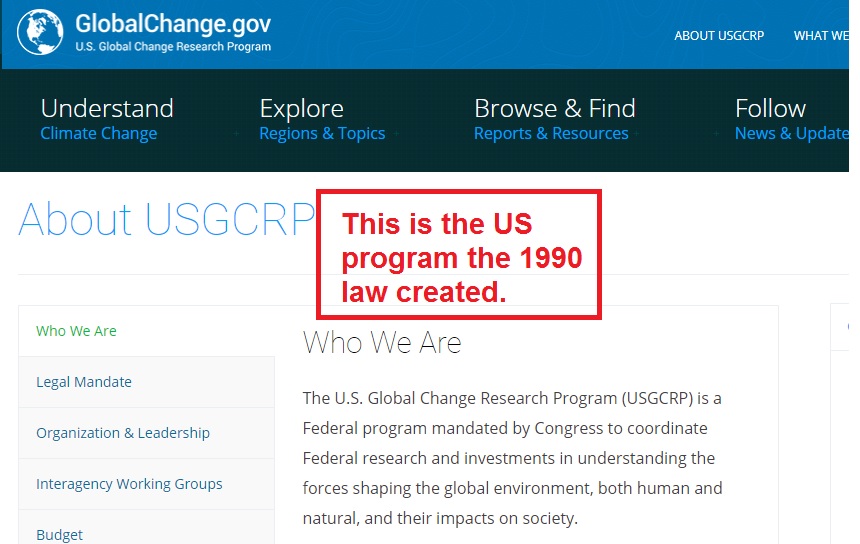 IF you are curious how much the research for global change has cost We the People, this is the latest set of figures.

In S 729, Sect. 106 of the Global Change law is cited. That section is described directly above. What’s troubling, is the 1990 Act required research to be conducted, yet S 729 is prohibiting federal funds. Does this mean corporate or private funds CAN be used? If so, how will the objectivity be assured for the nation?

If you’d like to see the Climate Science Watch’s 2017 Report showing the (then) latest information from the 4 year review, go here.

Warriors, it’s no secret that Sen. Schumer supports global citizenship. Back in 2017, I showed you the party outside the G20 meeting.  That party featured singer Shakira as a global citizen ‘ambassador’. In my follow up article to that, I showed you Sen. Schumer’s big tent outside that same G20 meeting. In both those articles, the ties to our students was very obvious. 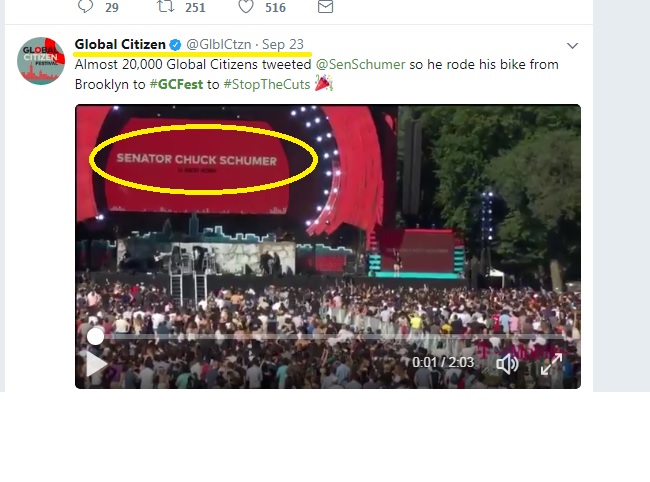 If you’d like to see how the SDGs are becoming the ‘new’ social contract, watch this video. You’ll see a representative of Goldman Sachs, actor Forest Whitaker,  a representative from Unilever, and, Shakira.

If you’d like to see Sen. Schumer’s full support and advocacy of the New Green Deal, go here.

For how Unilever is in on the SDGs and mental health overreaches (inside and outside education), go here.

How the Green Deal, new or not, has and is impacting education. 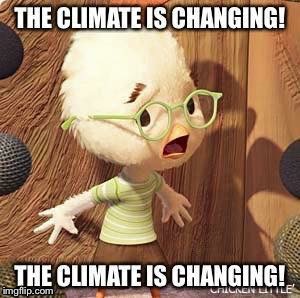 Lastly, from the Earth Day website, this about Next Gen Science Standards (oh, and they love CCSS, too.)

Warriors, I’m all for reducing our taxpayer abuse, however, I do not feel Congress should prohibit study funds in this instance. If we’re going to skew our laws to only fit one side of the coin, how is that liberty? How is it exercising truth and justice? Where is our freedom to know and decide for ourselves?

When truth is one sided, how does this help our students?

So, if you or someone you know wants to accept the global warming truth, that’s your choice, but it is NOT the government job to dictate it to us. 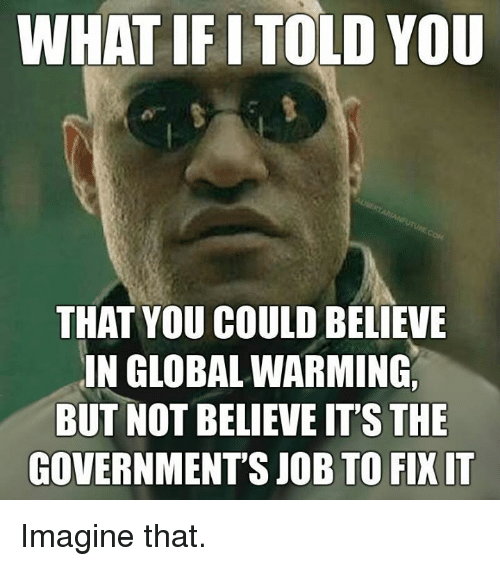