SEL (Social Emotional Learning) For All 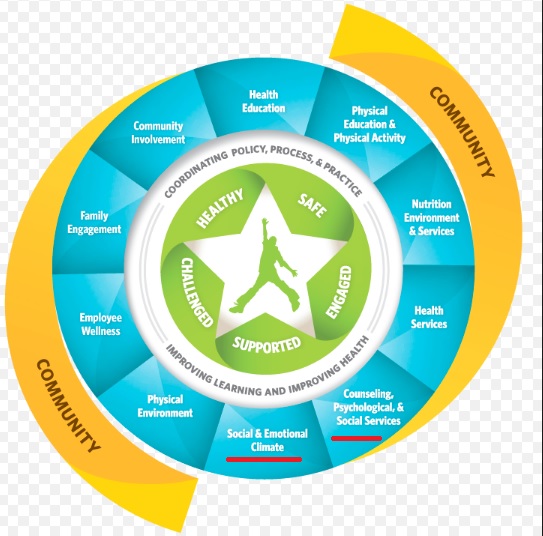 Anti Fed Ed Warriors, recently, I’ve been sent so much information on CRT (Critical Race Theory), that I devoted 2 articles to it. In those, as well as the accompanying interviews, I repeatedly pointed back to how CRT is using SEL (Social Emotional Learning) to further its choke-hold on America.

If you missed all this information, it’s right here. Take the time to go back and read, listen, follow the evidence via the provided documents.

That stated, today, I want us to look at the recent updated definition of SEL by CASEL (Collaborative for Academic, Social, and Emotional Learning). Warriors, as you know, there has been much research, by many, on the sinister agenda behind SEL at the hands and feet of CASEL. However, as the CCSS Machine grinds on, so does CASEL.

SEL Means You Can Get A Job:

Warriors, from my archives, this image. Not much has changed since this image, as far as Congress’s kowtowing to the CCSS Machine, in education. 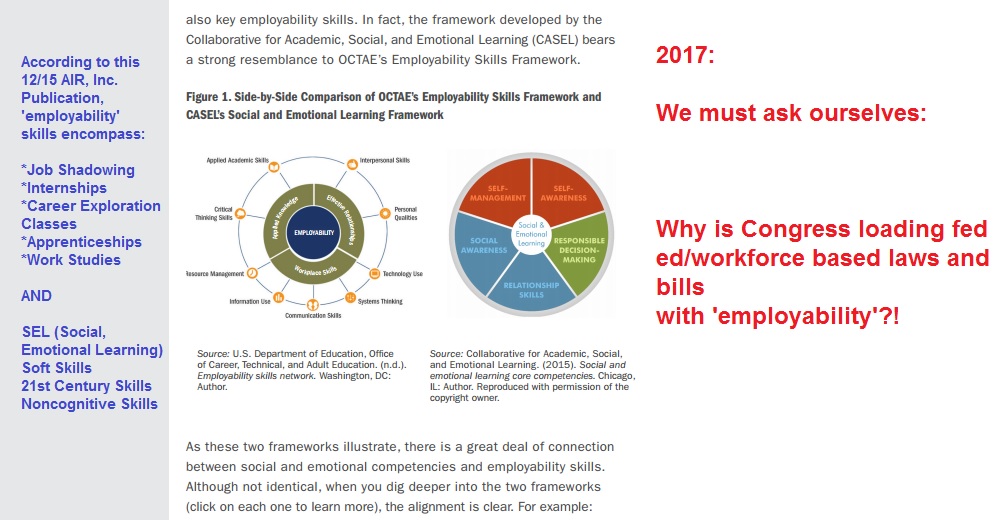 Back in 2016, CASEL reported to the U.S. Congress on how connected SEL is to getting a job. Look at the image below. To access the CASEL 2016 Congressional Report, go here. To see the Perkins website (Career Tech Education, the ‘adult’ portion of Common Core), go here: 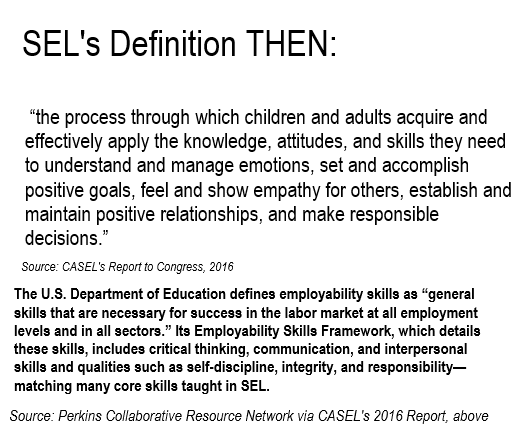 Back in 2020, CASEL decided to re-define SEL and how it fits our chances of being employed. In the image below, you’ll see more has been added: 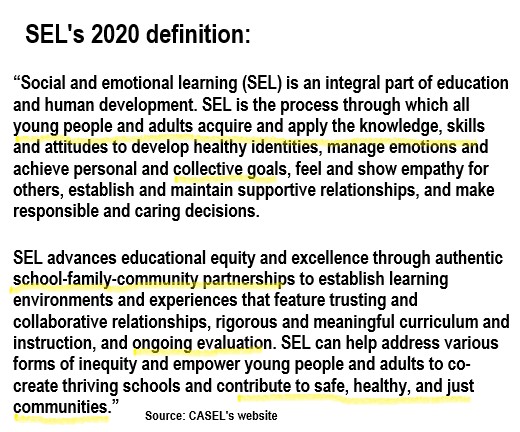 Look at the phrase “young people and adults”, that’s the CCSS Machine buzz phrase for the ‘cradle to grave’ or ‘birth to death’ alignment woven into not ONLY the UN’s Sustainable Development Goals (tying SDG #4 (Quality Ed for All) to SDG #8 (Decent Work for All), BUT, to Career Tech Education (formerly known as “Common Career Technical Core Education”; “vocational tech”, and other names) AND STEM (Science, Technology, Engineering, and, Math)!

Another phrase which is a CCSS Machine buzz phrase, above: ‘ongoing evaluation’. Warriors, this doesn’t simply mean constant assessments (computer/smart devices and their algorithms do this daily), but constant government led instruction or funding for instruction in OBE (outcome based education) or as it’s currently called: SBE or CBE (skill based education/competency based education). The OECD (Organization for Economic Cooperation and Development) like to refer to the ‘ongoing’ cycle all this creates as a track for ‘human capital’. How does the CCSS Machine ‘sell’ this to us? “LIFELONG LEARNING”. All these fall under what’s known as MASTERY BASED LEARNING.

Now, don’t lose sight of the fact that all this re-defined SEL is not only setting up a workforce based caste system, but notice in the 2020 definition for SEL that the ‘educational equity’ will involve big issues like the CRT push or the Comprehensive Sexuality Education push, or any of the other agenda based pushes you’ve been seeing in your State.

Warriors, I’ve shown you, repeatedly that the CCSS Machine and Congressional MISUSE of ‘education equity’ when it means ‘education equality’ is a purposed shift. Not only in words, but it deed. It’s actually showing us, what we’ve discovered a long time ago in this War Vs the Core: that money (equity IS a financing or property term NOT a term for people) is more important that people (equality)!

Both ‘equity’ and ‘equality’ are from the Latin language, but look at the differences between the two. How has ‘equity’ become misused (on purpose) for ‘equality’, especially in education? Equity has been redefined down throughout time. Compare an old, pre Common Core dictionary to a newer Common Core friendly dictionary. VAST DIFFERENCES are right there, in front of us. The modern day version of Merriam-Webster shows that while the two words CAN overlap, they really shouldn’t.

Warriors, I’m not turning this into a language lesson, I’m pointing out that the purposed word games can also point to the reduced focus on our language and what words mean. Look at how the CCSS Machine has attacked classic literature so that not only is context ruined, but grammar AND syntax (use of words). The CASEL/SEL shift to aid this comes across as SOCIAL JUSTICE. How? I would urge you to go back to the Part Two of my CRT Series and  look at the ABCs picture from Utah. Then, listen to the interview where this alphabet was discussed.

Warriors, have you seen the featured image (I’ve posted it here as well, in case you didn’t see the featured image). It’s a wheel depicting how the community is to envelope ALL the child’s needs. Notice that SEL is woven into this. Now, scroll back up to the 2017 image which showed the CASEL wheel. You’ll see the same concepts have been included and made to sound much nicer. Also notice how ’employee wellness’ is involved.

The ‘wellness’ of employees will tie back to the World Economic Forum’s CCSS/UN agenda for ‘human capital’, too. How? Mainly through the P3s (public private partnerships to ensure the entire community is aligned to the same cookie cutter human plot for control, not freedom.

Years ago, long time anti Fed Ed Warrior, Anita Hoge shared with us, as a warning, what the wheels the CCSS Machine REALLY mean: 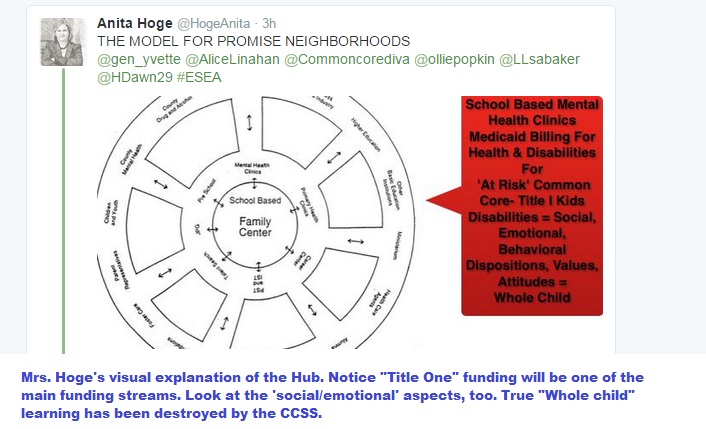 Back in 2014, another long time anti Fed Ed Warrior, Charlotte Iserbyt, showed us that the modern CCSS Machine’s SEL push was rooted in the
Soviet’s system for ZPD ( Zone of Proximal Development). What’s the circle for ZPD look like? 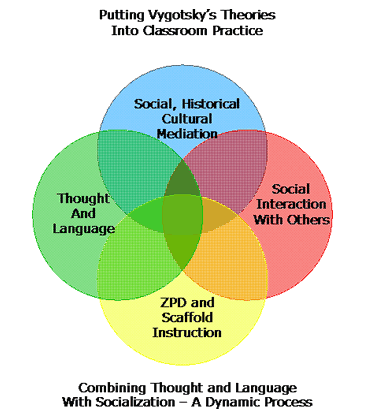 (*Note: In Charlotte’s 2014 article, she had a link to the website called “Tools of the Mind” which was broken. Here’s the link, again.)
To see the Russian roots behind ZPD, you’ll want to look to the creators and founders of Tools of the Mind. While CASEL is not among the partners of Tools, look at the CCSS Machine groups which are.
To see how not only SEL, plays into Tools/Mind, but P3s, COVID-19, at home learning, and CRT, go here.

So, where did the mastery based learning/social emotional learning first rear its ugly head in the US? A research and policy paper from 1968 shows how the Chicago Inner City Schools were key. Note, however, that in 1990, this was sent to the U.S. Congress and the question was posed about should American taxpayers fund a human tragedy. (Charlotte Iserbyt also provided this information for us. Her warning was to look at the image on the document’s page 10.)
Learning_and_Instruction-A_Chicago_Inner_City_Schools_Position_Paper-1968-87pgs-EDU.sml(16)(1)

So, Warriors, here’s a question: Since the CASEL Foundation updated the definition of SEL to better fit the cultural agenda as well as the CCSS Machine agenda, are other education related groups jumping on board? You bet! Look at how the SAT (Scholastic Aptitude Test) will begin using ‘adversity scores’ to level the racial divide in education. Woven into all this? Not only will your education (as a young student) be measured, but where/how you live AND your parent’s level of education will be measured!

Here’s another question? Why is the CCSS Machine using circles? The alignment connected to the educational system brings to mind a straight line, not a circle. But think about it. A circle has no beginning and no end. Hence, no escape. Think about the hamster wheel, the only way the animal can escape is to hop off. If you search the internet for images of the hamster wheel, you’ll begin to see it’s also called ‘the anxiety wheel’. The hamster wheel is also used to depict humans and their entrapment in a wheel of education. 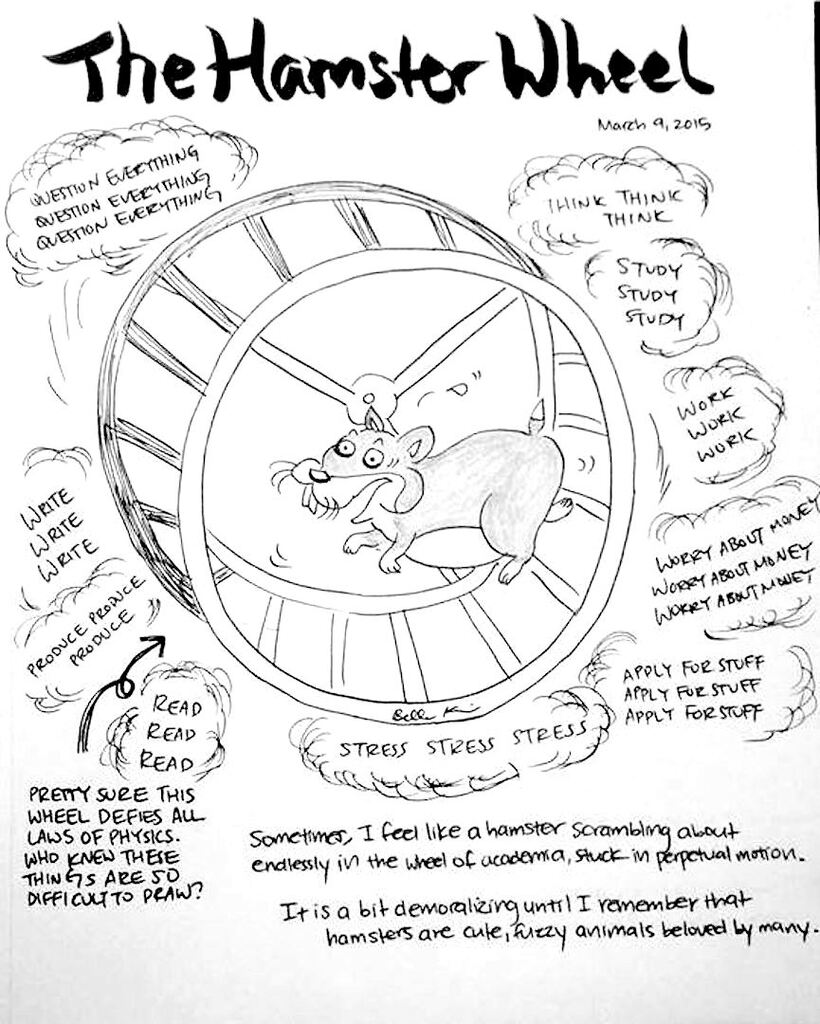 The systematic decline of SEL is precisely that for ALL of us, young and old: no escape unless WE CHOOSE to fight back.

One last thing, in my Part One article for the CRT resources, I showed you how Dr. Cardona, as the new U. S. Secretary of Education would be used to help further the SEL/racial discord agenda along. If you missed his letter to all U. S. Parents, read it AFTER you’ve finished this article and all the links included. I’m sure you’ll see the connections very clearly that the mindful assault of all of us, is in plain sight.

We need to show the CCSS Machine that no wheel can contain us! 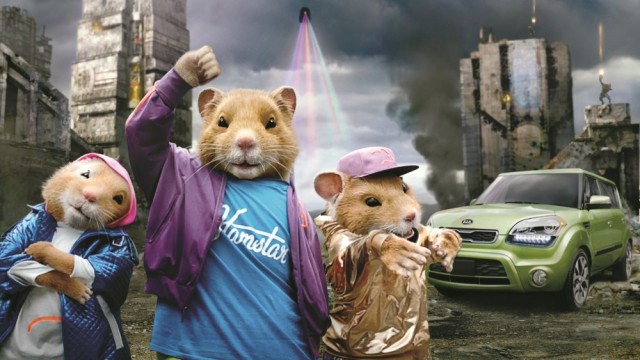 (image from the Kia commercials featuring hamsters and their car model, Soul)