Do You Know This GA?

Sure, we Anti CCSS/Fed Ed Warriors know there are General Assemblies of all kinds. We have them in our communities, our legislatures, and even global ones. But, did you know there is a CCSS Machine ‘General Assembly’ group?

How I Found Them:

As an avid researcher, it is easy to find one group when investigating another group. Add in an educational topic, and the groups appear to be not only tied at the hip, but plentiful.
My latest ‘connect the dots’ findings come from when I was looking into WhiteBoard Advisors and found General Assembly, a Global Educational Group.

In case you missed my Weekend News, my third point in the publication was to point you to the WhiteBoard Advisors and their May 2016 Education Insiders Report. I noticed in several instances on the W/A (as they refer to themselves) website, General Assembly was brought up. Thinking it meant that the W/A had a General Assembly (GA), I tried to find out who serves on it. However, what I found instead was the linkage between the two separate groups. All in the name of education reform, to boot! While there will be plenty to share about W/A in the near future, I will be using the rest of my Monday Musings to look at the General Assembly Educational Group.

The website: https://generalassemb.ly/
The Co-Founders: Matt Brimer and Jake Schwartz

Their message: “General Assembly (GA) is a global educational company on a mission to empower a global community to pursue work they love. Focusing on the most relevant and in-demand skills across data, design, business and technology, GA is confronting a skills gap through best-in-class instruction and providing access to opportunities. GA works with students online and in person across 15 campuses in 4 continents. GA also works with companies as partners in course development and graduate placement as well as helps companies stay competitive in today’s digital landscape. Additionally, GA’s focus on affordable and accessible education combined with our education-to-employment approach is helping to create a diverse talent pipeline.”

Warriors, do you see the CCSS Machine agenda? I do!

GA’s tie to the WhiteBoard Advisors is the Sr. Vice President and Co-Director of Research for W/A, David DeSchryver. See below:

What in the Report is of note?
1) Former Governor for NC, Bev Purdue (also a Senior Advisor for W/A) wrote the Forward in the Report. Bev Purdue, is a ‘card carrying member’ of the CCSS Machine. (*Note: her company DigiLearn is proof.)
2) The Report is from 2015.
3) It gives a ‘Top Ten’ list of policy making considerations to boost state and local economies via skill based education.
4) Both authors (DeSchryver and Kelly) are tied to other CCSS Machine member organizations. Kelly is tied to the Gates Foundation funded Education Week; DeSchryver has been in the thick of education reform since the NCLB (No Child Left Behind) days.
5) The Report falsely carries the notion of the ‘skills gap’ (*Note: I have shared documented evidence with you in the past that the skills gap is narrative of panic the CCSS Machine is using to further their involvement of workforce based, P3 (public private partnership) driven education.)
6) Cities are giving grants to GA to come and operate there. An example is New York City and can be seen on page 6. (A related NYC article: http://www.businessinsider.com/hustle-con-presentations-on-startups-from-nerdwallet-teespring-general-assembly-thirdlove-2015-4)
7) The Report details how GA is helping transform America’s economy.
8) GA is working with an official from the  U.S. Dept. of Ed to help accelerate learning.
9) The Report details how all this will be regulated in various States. Usually either the Workforce Training or the Higher Education Committees.
10) Employers are expected to not only be clear about their workforce needs, but to help in the credentialing process for education.
Lastly, of the Top Ten priorities for state and local policy makers? Outcomes! Not true education, but outcomes of our students…of all ages!

From the list above, you may (or may not) see any further CCSS Machine connections. However, there are a couple which really stand out to me, GSV Capital and Rethink Education. In a short sentence, GSV is tied to the CCSS Machine through investments.
Rethink Education is tied back to W/A (WhiteBoard Advisors) via Ben Wallerstein, one of the co-founders. That said, let’s see what else I can point you to about each of THESE CCSS Machine member organizations.

GSV Capital: I first exposed this group by in 2014. See my article:
https://www.commoncorediva.com/2014/09/16/from-the-files-tuesday-down-in-the-valley/
In this article, I showed you the ‘GSV’ in GSV Capital stands for Global Silicon Valley. The Capital’s goal? Re-imagining education…we are talking well-known heavy hitting big name CCSS Machine members are involved; we’re looking at least $4 trillion dollars in the global education market, Warriors! We are also looking at how this group wants to eliminate school boards in the process. To see where in the list of priorities THIS bombshell is, be sure to enlarge the picture when you read the above article.

Okay, that was 2014, what about GSV Capital has changed? From their Blog titled A2Apple,
“While there was plenty of competition for “mindshare”, last week we co-hosted the seventh annual ASU GSV Summit in San Diego, a gathering of leaders from across the global innovation economy with the mission of accelerating exponential ideas in education and talent. We welcomed over 3,500 entrepreneurs, educators, business leaders, policymakers, and investors, as well as 350 game-changing presenting companies.” (*Note: ASU is short for AZ State University, another well known CCSS Machine member.) See the screen shot below from the Blog. 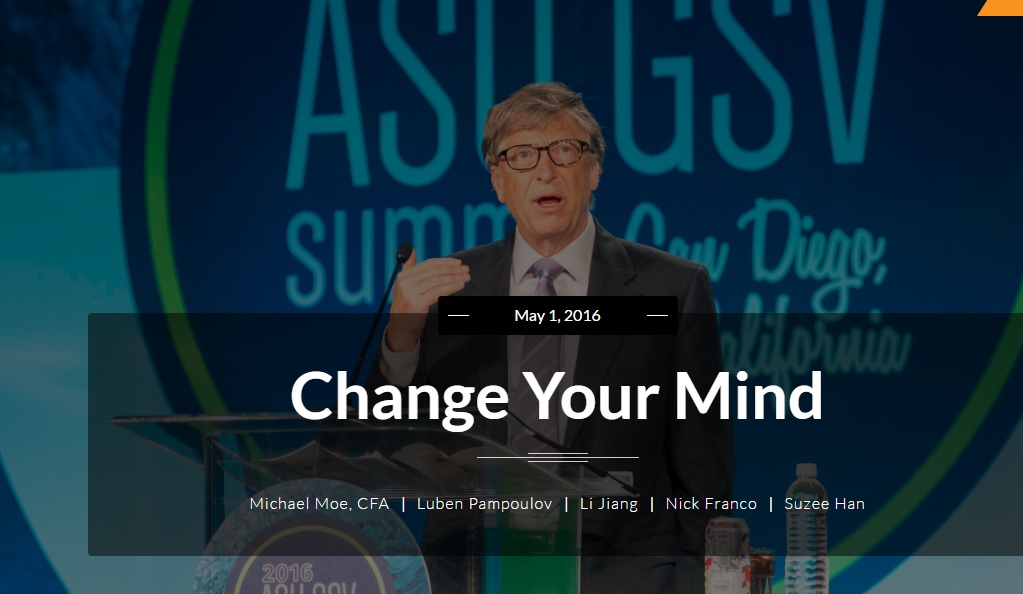 Yes, Warriors, we knew Gates would be involved somehow. To read the rest of the article where both the excerpt and the picture are from: http://www.a2apple.com/change-your-mind/ (*Note: be sure to scroll down and see the pictures of the other speakers. Among them are Ted Mitchell, of the U.S. Dept. of Ed. and Dr. Condoleezza Rice of the Jeb Bush-backed FEE (Foundation for Excellence in Education. Be sure to look at the rhetoric and the research sources.)

By visiting the GSV Capital’s Strategy webpage, be sure you read the Making Private Public section to see where education comes into play. See:
http://gsvcap.com/about/strategy-purpose/

Rethink Education:
The website for this education venture investment firm: http://rteducation.com/
Tying them back to the W/A group is WhiteBoard Advisor co-founder, Jake Schwartz.(*Note: he can be found among the Rethink Education Portfolio Investors.)

Also among the Rethink Education folks, is Tom Segal, one of the co-founders. He is regularly featured on EdSurge (another CCSS Machine member). Tom also posts blog entries on the Rethink Education website. His entry about the beginning of Rethink is worth noting. Why? Both co-founders have a long history of ties to CCSS Machine connected entities, like Head Start and CUNY (NY). I have tied both of these back to the Machine in previous articles. As far as EdSurge’s ties: One of the Board members represents GSV Capital!
To see the beginning of Rethink Education: http://rteducation.com/where-we-came-from/
To see the GSV Capital Board member: http://about.edsurge.com/board/ (*Note: When you read Matt Hanson’s bio, be sure to see where it mentions he is also tied to GA, as in the General Assembly Global Education group!)

To read a related article about Rethink Education and how it is a great new thing for education to be incentivized by private groups: https://www.edsurge.com/news/incentivizing-innovation-in-education-or-a-role-for-for-profits-in-education

Closing:
Warriors, do you see the nebulous ties above? It is insane how these groups are so closely in-bred. Not only are we having to fight the federal and state levels of government over Common Core and all that goes with it, but we have a plethora of private groups strangling our voices! Our governments and our schools should NOT have ANY private investors except the parents! By this, I am not talking investing money, but parents investing with their hearts because they are simply trying to do the best for their students. ESSA (Every Student Succeeds Act), WIOA (Workforce Innovation and Opportunity Act), and the HEA (Higher Education Act) mock us. The P3s mock us. The CCSS Machine not only mocks us, but is doing its best to silence us!

Be sure to note that I will continue to delve into this subject and report what I uncover. I will also be exposing more about WhiteBoard Advisors soon.