Anti Fed Ed Warriors, today’s blog article isn’t so much about taking sides as it is pointing what’s ahead:  in education, in our communities, and, most especially to our families. I will also publicly state that I do not support family violence or misuse of our law enforcement system. I am supportive of the proper treatment of those with addictions or mental health issues AS long as they are not under the thumb of the status quo, sold out system plaguing our nation. While you may think I’m off base in this article, it’s the trail of evidence I am pointing out. It’s the thin veil of delusions our officials, media and the CCSS Machine have cast in front of us that I’m exposing and ripping down. As Paul Harvey once stated, ‘here’s the rest of the story’. I only would add here are some questions we should be holding others accountable in answering.
****************************************************************************************

Much of the CCSS Machine’s agenda has always been about breaking up family attitudes, values and beliefs. SEL or social and emotional learning isn’t new, but the influence of the UN’s Comprehensive Mental Health Plan has stepped up the educratic overreaches by leaps and bounds.

(Article where this image can be found also included the image below from a federal level bill to address substance abuse. While substance abuse doesn’t appear to be an issue in the current MI situation, it’s the way in which the funding streams surrounding substance abuse which are being used against communities and families for MORE government control!)

Schools were NEVER designed to be quasi mental health facilities. Teachers were NEVER equipped to be diagnosing mental health screenings or overseeing assessments for mental health issues. Students were NEVER supposed to depend on the school system to take over the parental role; yet EVERY ONE of these overreaches has taken place via the CCSS Machine.

One of the best examples of HOW this is happening is the current case in MI about a teen killing classmates and his parents becoming scapegoats for the entire event. One news source even stated that the parents activities will be used as an example for the rest of the nation.

Warriors, you know when mainstream media makes a statement like that, trouble is definitely ahead for us all.

Don’t loose my point, here, Warriors, I’m not supporting gun violence; nor am I supportive of those truly guilty going unpunished.
My points are simply that, once again, (A) Through the manipulation of our entire criminal justice system and how it’s attached itself to schools to create a false narrative cannot be ignored. (B) That creating scapegoats is immoral and unjust and doesn’t support the ‘innocent until proven guilty’ framework of our U.S. Supreme Court’s Taylor vs KY case. We need to understand that this basic legal right established the ‘innocent’ precedent to be applied to criminal trials NOT law enforcement arrests! (C) Regardless of the level of parental involvement, much pain and heartache are being visited upon several families who will need level-headed compassion.

So, what is ‘scapegoating’ and how does it apply in education? According to this psychological blog, scapegoating is:
“Scapegoating has been used as an explanation for family disturbance, prejudice, the treatment of criminals, and the development and treatment of mental illness. The most common interpretation is that the scapegoated person or group serves as a receptacle for the projections of unacceptable impulses and blame.”

In the Holy Bible “scapegoating” was a part of the sacrificing system in the Old Testament. Usually a pair of goats (hence the term) were used. One was used as a burnt offering, while the other goat was used to somehow ‘absorb’ all the sins of the community and banished from town.

This APA research suggests ‘scapegoating’ is used to either reduce guilt or increase control. (Note: the APA, American Psychological Assoc., is also a CCSS Machine member. So how objective is this research?)

It’s in the contexts that you can see how the shooter’s parents are being viewed. Did they really contribute to the teen’s mindset? Did they turn a blind eye? We don’t know, none of us where there. We do know from the mainstream media that the condemnation is ‘off the charts’. “Failure to check their son’s backpack.” Do we, as parents daily check backpacks? If so, what does that say about trust among families?

No, the community wide ‘scapegoat’ scheme isn’t new. These MI parents are not the first to be under such scrutiny. They certainly will not be the last ones. However, the CCSS Machine’s increased pressure to create social justice warriors is in full display in the most recent school shooting. It’s not the first one, either. Back in 2014, I showed you how SAMHSA and its’ Project AWARE were setting up back doors to more gun control. Warriors, the agenda went much deeper then, and it’s only strengthened its grasp on schools and communities since then. Under the guise of COVID-19 relief, the Biden Administration has made an official statement on the need to beef up mental health school based services. This Oct 2021 ‘fact sheet’ lays it out.

Look at this statement as seen on social media: 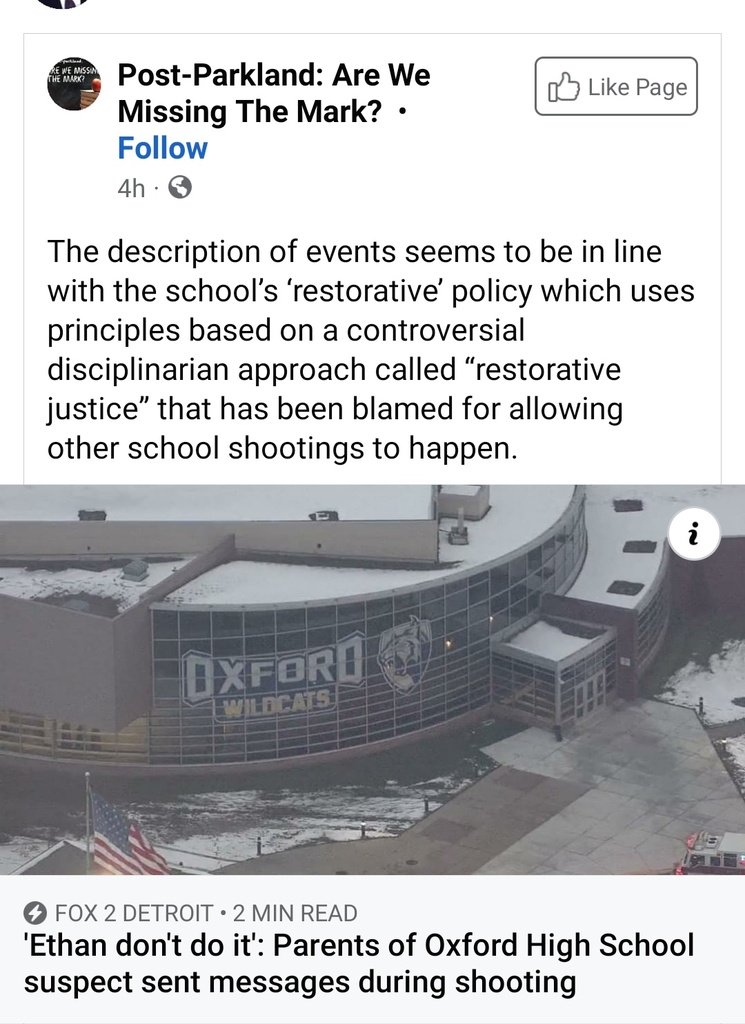 Warriors, note the image states the high school is using a collective mindset of ‘restorative justice’. It also doesn’t really explain the mindset.
So what is ‘restorative justice’?
According to Oxford High School’s Student Code of Conduct, restorative justice is achieved by assigned roles of the student, parent, and school leaders. If these roles are compromised, discipline is in order, BUT, it’s all hosted from within the school, not in appropriate health care facilities or mental health doctors diagnoses. Here’s an excerpt of the system approach:
“ Positive Behavioral Interventions and Supports (PBIS) *I included all my archived articles on PBIS and its damage*• Michigan Model for Health™   *All based on outcome based education or skill based ‘monkey see/monkey do’*• Focused instruction to avert academic failure *see the image below*• Restorative practices   *see this website for the collective twist on how ‘justice’ is involved, especially the image*• Early intervention/diversion programs for substance abuse and other appropriate violations *see the image below*• Family supports and referrals to available community-based resources as appropriate  *see the image below*• Addressing school climate and culture” *aka ‘safe schools*
You can access the Daily Wire article where the pdf version of the Code can be downloaded, from this link. 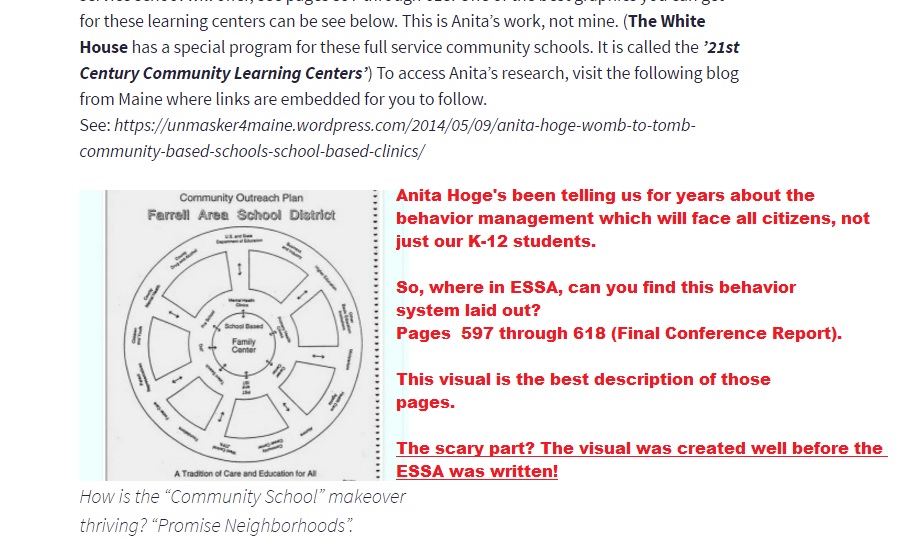 Here’s the link to the main website for the Oxford, MI high school. Among the many other clues* as to how sold out this school is, here are their values: “Trust – Integrity – Commitment – Collaboration – Honesty – Accountability
At Oxford Community Schools we are committed to creating lifelong inquirers who are caring, contributing members of a global society.”
(*other clues include Oxford is an IB school, meaning it’s a UN school; Oxford uses several CCSS Machine data mining/tracking programs; among the student support services is a family/school liaison; among the activities are the ABC News”13 Reasons Why Not” suicide awareness. This is a direct counter to the Netflix series about teen suicides, called “13 Reasons Why”; the school is big into CTE (Career Tech Education  and STEM, Science, Technology, Engineering and Math).

Oxford High School is among other schools managed by a single school entity known as Washtenaw Superintendents Association. This Association also operates under a collectivism approach and links law enforcement to schools. How? Federal and state grants. However, the most glaring alarm for a controlled society will probably go unnoticed. What?! Yes, if you look at the statement about ALICE (alert, lockdown, inform, counter and evacuate) you’ll probably not realize what it is.

Here’s a short video about the ALICE impact and why you should always be prepared.

How was ALICE created? Out of fear and a sense of collective social justice as a result of the Columbine School Shootings.
ALICE’s parent company is a data driven ‘holistic’ company called Navigate 360. Oxford High School had been through the ALICE training via Navigate 360. This article from the NY Times begs the question of how effective the ALICE program and training are! 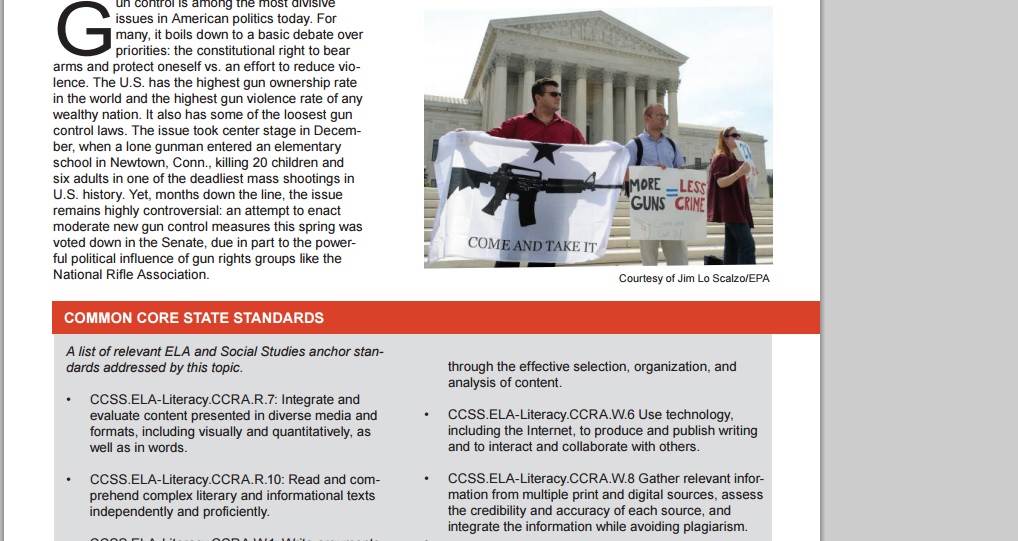 (My archived article where the above image can be found)

Related:
1) Currently, in the 117th Congress are a pair of bills which are designed to increase the amount of funding to expand mental health overreaches under the guise of preventing substance abuse. S 987 and HR 4341 (CARA 3.O Act)

2) HR 5469 will expand community wide mental health overreaches via SAMHSA (Substance Abuse and Mental Health Services Administration) housed in the U.S. Dept. of Health and Human Services.) This Bill has already passed the House and is in the Senate.
It uses racial inequalities as the platform, yet the Bill doesn’t use ‘equality’, but “equity”. Once again, this points to money is more important than people.)

3) The Sons of Liberty interview on the CCSS Machine’s continued quest to dissolve our 1st and 2nd Amendments rights.

4) This 2020 Chalkbeat article detailed the failures of the MI approach to student discipline as being at least 3 years old. In 2021, the same media source detailed the scaling back of law enforcement in MI schools.

So, if the system was already broken and all that money to implement ALICE, will this latest incident find MI schools (or any other State’s) once again turning schools into more prison-like facilities? Remember, ESSA, Every Student Succeeds Act mandated ‘safe schools’. The COVID-19 CARES Act and other related school funding also included ‘safe schools’. However, and this is where folks will not be looking: the net cast for safe school is larger than ever. It’s not just about aiding Johnny and Suzy’s academic prowess. It’s about controlling minds with shifted attitudes, values and beliefs. Remember, this is NOT exclusive to K-12th grade public schools; this shifts are COMMUNITY WIDE (thus an increase in community schools, also found in ESSA and fully supported by the CCSS Machine!

5) The Sons of Liberty interview while Trump was President and the ‘mental health grab’ for communities (under MI’s Betsy DeVos as US Sec. of Education).