Monday Musings: The CCSS “Are You Kidding Me?!” Files

As October winds down, anti CCSS Warriors, the hype supporting CCSS appears to be ramping up. Today’s post will show you how. Use the information to keep the pressure to STOP ‘Common Core’ (and all its aliases)!

Those running the CCSS/CTE Machine have made it no secret that ALL students, regardless of their educational choice OR abilities are to be run through the streamlined fare ‘Common Core Standards’ and all its accompanying resources. This, sadly, impacts our special needs kids. IF your family receives any IDEA funding, you are being subjected to CCSS in some way. When the schools receive their IDEA funding (and this includes post-secondary schools or all kinds), your students are most definitely being slammed with Common Core, Career and College Readiness, STEM, and, Career Ed Tech.  To find out MORE, please refer back to https://www.commoncorediva.com/2015/10/19/monday-musings-idea-when-good-goes-ccscte-bad/
If you would like the ECS (Education Commission of the States) document from 2014 where plans to collect more ‘measurements’ of special needs students progress as well as their parents, see: SPtracking To see another way the special needs students were tracked, is a report from 2004. See: SpecNeedsDataCollect If you’d like to learn just how toxic the re-authorization of the ESEA (Elementary and Secondary Education Act) via HR5 (Student Success Act), please read Anita Hoge‘s article where she speaks in plain English how special needs students (as well as all the other types will be marginalized horribly).
http://www.newswithviews.com/Hoge/anita113.htm

Most folks balk at me when I even dare to mention how STEM is tied to CCSS, yet, the evidence is there. In case you didn’t see the news about the STEM Act passed into law at the federal level, here’s the article where I shared all the news about it. The Act is named “The STEM Education Act of 2015”. Why would a new Act concerning education be a problem? First, it’s at a FEDERAL level! As in ‘federally led education’. On Twitter anti CCSS Warriors refer to it as ‘fed led ed’. Secondly, the federal level law dictates a certain type of course now be included in STEM. Seriously?! Yes!! So where was the parental input? Where was the local level of education? It was excluded…just like we’ve seen from D.C. more and more in our recent past. This Act involves several other federal agencies in education, alignment, and data mining! This Act is so overreaching into education, it will not stop at the school yard’s boundary. No, this one takes education into almost every informal learning environment we could possibly use. For example, your libraries, museums, field trips, and so on. Again, HR5 (see above) has stealthily embedded the CCSS tied-STEM into the language as part of the  ‘afterschool programs’ and ‘wraparound services’.
Read all about it: https://www.commoncorediva.com/2015/10/21/wybi-tying-stem-to-ccss-again/
If you’d like to see the archive where I was able to find the STEM tie to HR5, refer to:
http://wpllc.net/tag/hr5/

I’m including my release of this past “Weekend’s News” because you have to get the vital information somehow! What do I mean? I’m referring to the ‘block’ I received from social media when I was sharing the truth about what’s up in America and CCSS. Once again, (this isn’t my first time being blocked), and, as other anti CCSS Warriors have experienced, the CCSS Machine tried to stop me. But, the funny thing about truth is..it ALWAYS wins! Thankfully, several of my fellow Warriors, picked up the story and passed it on for me. However, there are many others who didn’t get the what’s up. So, I’ll state briefly WHY the “Weekend News” was so controversial it got blocked.
1) It named certain people as being involved in the corruption of education in America
2) I openly displayed the social media site in some of my screen shots
3) Point by point CCSS/CTE/STEM tied programs were specifically named and tied back to a well known university
4) Of those named, two are legislators in NC and another is running for the US Presidency
5) I exposed the fallacy which was shared over social media that NC had removed CCSS recently, when in fact, the original source was from 2014 AND didn’t tell the entire story!
Get it while you can: https://www.commoncorediva.com/2015/10/25/weekend-news-ccss-rumors-abound-at-least-in-nc/

I urge you, read the article. It IS so vital to our War Against the Core! You need to see just how far the CCSS/CTE Machine is going to place specific people in very educational influential positions. Yes, we’ve seen this before, BUT the operators of the CCSS Machine are becoming less and less stealthy about it! We MUST act! We MUST continue to expose the injustice that is happening every day in America via education reform! We know the bottom line isn’t an academic education, it’s about a ‘talent pipeline’ to feed a ‘workforce agenda’.

As you read this, the US DofEd is hosting a “Parent Camp”. I kid you not. If you use Twitter, be sure to look up ‘#ParentCamp’. You won’t believe the ‘shuck and jive’ dribble about education leading parents. Better yet, why not scoot over to the US DofEd’s Family Engagement page. There you can find all kinds of things the Dept has put together to show you HOW to parent THEIR way! Think I’m joking?! Read this excerpt, “If effective cradle-to-career educational partnerships between home and school are to be implemented with fidelity and sustained, engagement initiatives must include a concerted focus on developing adult capacity, whether through pre- and in-service professional development for educators; academies, workshops, seminars, and workplace trainings for families;” Want to read the rest? Be sure not to miss that one of the 4Cs in this parental persuasion is ‘human capital’!
USDofEDparent

From The US Chamber of Commerce’s Education and Workforce Committee:

Their latest efforts? Using local Workforce Boards to highlight the skills gap needs to be closed. As I’ve shared in the past (as have other anti CCSS Warriors, there is NOT a skills gap! The CCSS Machine has presented the fallacy that such a gap exists, but it does not)

By the way, the article to which the Chamber refers is worth reading. Get it:
http://www.ocregister.com/articles/county-688751-employers-workforce.html
Here is the picture the “Register” chose for the article: 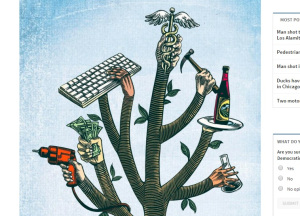 So, my fellow Warriors Against CCSS, we have MUCH to do and not much time in which to accomplish it!