Update on “Of Late” 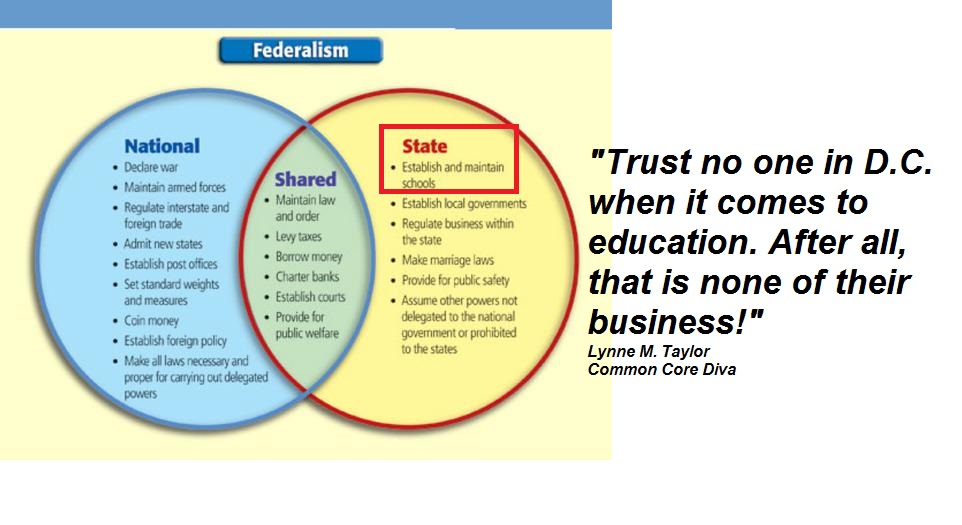 When I wrote “Of Late”, I knew there were several key pieces of evidence to present and somehow tie together.

Almost immediately after the article hit the social media circuit, I got at least 2 other leads from fellow Warriors, making EVEN more connections to the subject matter in “Of Late”. If you missed that topic, it was all about the how our current U. S. Congress is bowing MORE to a global vent for workforce based education for all ages and all educational choices.

What follows is to be used as tools for every anti Fed Ed Warrior out there. Yes, it’s in-depth. But, it needs to be.

Where I Left Off:

Warriors, I left you with the confirmed evidence that American education is being used as a tool against us for the purpose of reshaping our nation. To continue that re-shaping, look to North Dakota, first.

My fellow Warrior from “The Roughrider State”, noticed that some of the items I shared seemed a bit TOO familiar. She then referred me to Gov. Burgum’s recent Innovation in Education Summit. She laid out some quick facts about the ties some of those presenting ‘expert’ evidence have to the CCSS Machine. She heavily questions how well these people represent the values of the North Dakotians.

I  found Dintersmith involved in another education reform area (which was also another tip from my ND friend). That is the “Most Likely to Succeed” documentary. This was filmed back in 2015 and was considered a hit by the Sundance Film Festival. What the documentary shows is chilling, Warriors. Below is the just over 2 minute trailer. Notice the key CCSS Machine members (Robinson is tied to Pearson, Khan is tied to the Khan Academy and received Gates Foundation funding to switch to CCSS, Common Core State Standards.)

(*Note: the full length documentary is not available legally for free on You Tube due to copyright issues.)
Below is a ‘team’ spirited description about the documentary. The number one team member? Dintersmith!

If you’d like to see the “Most Likely to Succeed Learning Sparks” (short videos to spur you into action to help create more ‘innovation’ in your schools), find them here. Warriors, you find out how to ‘hack’ education and more. Look for Linda Darling-Hammond to be among the ‘experts’. Try not to cringe.

Warriors, I haven’t forgotten Dintersmith’s assignment by former President Obama (in the brief bio description above) to the UN. Neither should you.

Time and time again, I’ve shown you fact based research on how the former leader and his administration bent over backwards to help continue the cycle of ‘dumbing down’ American education.
There was the PCAST Report from 2010 where STEM was ushered in as a disguise for the UN’s SDGs (Sustainable Development Goals), thanks to the NSF (National Science Foundation) and many other CCSS groups. There was also ‘innovation’ after ‘innovation’ initiative or some digital push to be foisted on our teachers and students.

Thanks to ESSA (Every Student Succeeds Act), those ‘innovation’ and digital overhauls are 100% certain. Has our current President slowed any of this down? Hardly.

Warriors, remember, Dintersmith is a business man, not an educator. The fact sheet for the same White House Report reveals not only a big STEM push, but CTE (Career Tech Education) push, too. Both STEM and CTE are tied up in CCSS, apprenticeships, and the global education scheme of the United Nations.

Getting Back To The “Most Likely”:

Warriors, here’s an almost 30 minute video featuring the producer and lead team member for “Most Likely to Succeed”. You’ll not only see clips from the full documentary, you’ll hear first hand pro CCSS Machine discussion. Once again, Linda Darling-Hammond will surface during this video with her explanation as to how ‘grit’ will help solve the outdated American education. Listen all the way to the end. There is key evidence there.

One of the major concerns of my ND Warrior friend is shared by others in a few other States. The profiling of our high school students. If you’ve heard of “NorthStar” you know what I mean. The Facebook group Educray is based in TX. When my ND Warrior shared her concerns on social media, Educray was quick to join her. See below: 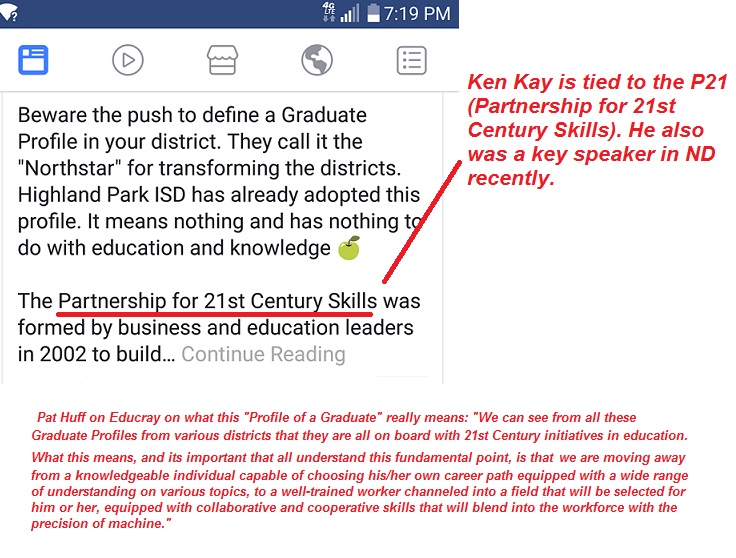 To see the Profile of a Graduate/EdLeader21 description of these types of data mining profiles, access the information here. To see the 4 Cs, collaboration, creativity, communication, and, critical thinking (which replace the 3 Rs in education), look here.
Getting Smart (Tom VanderArk) has a detailed article and podcast you’ll need to investigate. You’ll see other States using these profiles for ‘quality education’.

Also featured in the ND Innovation Summit was “School ReTool”. If you’re not familiar, have you noticed how many of our schools are building torn down to be replaced by buildings which could double as a prison? To find out about this movement and how it connects to the global scheme:

If you wonder about the ReTool’s ‘mission’? Look below:

Part of the ‘retooling’? “Academic interships”..a fancy name for ‘Apprenticeships’!! If you’ll remember, Warriors, most of the “Of Late” article spells out for us the global ties to apprenticeships, higher education, and more. To see School ReTool’s Academic Internship plot, visit here.

Warriors, since most of the apprenticeships and internships are targeting our high schoolers in an attempt to groom them for higher education, we know to be watching the post-secondary reform like a hawk. You also know, I have been helping you do just that for years. EdWeek has an article, published earlier this week which reveals some valid points (even for a pro CCSS/ESSA source).

Point #1: Since the U.S. Secretary DeVos has been in office, she’s tackled much more higher education reform than K-12th grades.
Point #2: There’s a ton more federal control on colleges, community colleges, proprietary (for profit) schools, and all the early college, skill prep programs to unite K-12th to post-secondary education.

Warriors, much of the conversation about all this alignment, reform, and increased innovation leaves out the bare faced fact that innovation actually stunts our minds.
How? Too much of anything is bad for us. As the push to unite the USA to a global education continues; technology and innovation/infrastructure for such will continue to envelope us.

Released in 2016, is the short You Tube film which depicts a father and child. Conformity to a work/school system is the topic. According to the resource I found highlighting this film, the tone of the writer is that we must change society to join work and education.
Exactly the message we are hearing from the UN, Congress, and our Administration in Washington, D.C.

The writer stresses that is it our current mindset toward work and school which is killing our student’s minds. In the fact-based research and evidence, it is the CCSS Machine grasp on education which is doing the stunting. NOT parents, not our environment.

I was able to find that one of the producers of “Alike” (Daniel M. Lara) is tied to the Blender Foundation and their 2016 Conference, where he was a featured speaker. Blender Conferences have been an annual event for a while now. Blender’s focus? Arts, technology, animation, and all related subjects. I also found that the Blender Foundation was cited as a resource (page 86) in a STEM (Science, Technology, Engineering, and Math) publication from 2015 for IGI Global for use in America. This Google Book is a goldmine of education reform. Chapter 83 is all about embedding pedagogy into NGSS (Next Gen Science Standards), you’ll see how innovation is to be used to target those ‘less academic’ than their peers, you’ll find out STEM is being unleashed on our babies, how ‘blended learning’ and PBLs (Problem Based Learning) is to shift education’s responsibility from teacher to student as a force tactic, future trends for K-20 education (kindergarten to 4 year college degree or similar), service based education (as in grooming the ‘collective, global citizens’), computer games as science teachers, multi-pronged distance education, how the Europeans are educating in these ways, open source lectures (coding classes will tie in here), and, more. (*Note in the beginning pages the number of American Universities.)

A 2014 Oregon State University Blender Camp brochure. Warriors, it will show you how ‘blending art’ and STEM fit into the classrooms.

Interestingly enough, Betsy DeVos and Ivanka Trump just promoted more girls to STEM in the Smithsonian Museum, 7/25/17. They teamed up back in March 2017 to do much the same. (*Note: Not so funny, one of the UN’s SDGs is promoting women in education, especially STEM.)

IGI Global has a Pearson Publishing assessment available for a price. Check it out.

Warriors, as you know I’ve shared with you how sold out to the CCSS Machine, NC is. Living here has given me the opportunity to show you things to watch for. Look below. One of the NC legislators is bragging on how ‘we’ will be the first in the nation for state-wide classroom internet access. Remember, ESSA’s mandates in technology include such. Way to align, NC.

Access the “Economist” article and you’ll literally read the beginning words with the name of B.F. Skinner, quickly followed by Bill Gates and Mark Zuckerburg.

The long road of reform to a global education is fully in the works. Warriors, let’s get busy!