Big Bucks For What, Part One?

Anti Fed Ed Warriors, it’s been a couple of days since the Fiscal Year (FY) 2021 Presidential Budget’s been released.
Yes, you’ve probably seen many articles about the taxpayers savings, especially in the name of ‘education’.

No, I’m not behind in sharing news, I’ve been pouring over the 100+ pages of the Budget to bring you the truth. Not, what I think will garner votes or will make great headlines. We’ve suffered enough fools from the CCSS Machine.
We owe it to ourselves and other taxpayers to look deeper into this Budget. 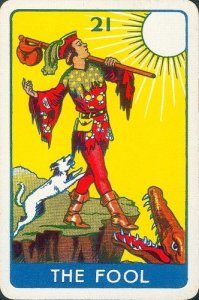 Warriors, I want to draw your attention to two facts:
a) This isn’t the first time I’ve raked over Presidential Budgets.
b) Look at the definition of ‘budget’. Webster’s Dictionary tells us it’s the breakdown of a spending plan. “MyMoneyCoach” tells us that budgeting is balancing your expenses with your income.

Warriors, the USA is not balancing expenses/income! It’s not been successful in many years to this end. If you look at the government process of creating a budget, it smacks totally of CCSS Math.

Look at the National Debt Clock.

Warriors, as you know, if you’ve visited this website before, that the numbers are constantly changing.  At present, the debt is growing, not shrinking. Be sure to visit the site for a real time glimpse. However, above, I’ve pointed out for you the imbalance between income and expenses. This is seriously troubling.

I don’t know about you, my followers, but if this is the cycle, why is DC not acknowledging that until income/expenses are balanced, there should be zero budget requests? My friends, we, should be sounding the alarm that BAD government cannot and will not repair, or keep ‘great’, our nation. We have a civic duty to shut down BAD government and fix it, before opening government back up. Yet, we don’t. Why?

NOW, more than ever, we should fulfill that duty. Why? With the USMCA (US-Mexico-Canada Agreement) being signed into the implementation phase, EVERYTHING we know will change.

Most of all, education. It’s nothing BUT indentured servitude. 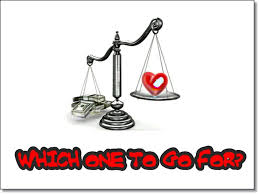 Warriors, much of the Press Release language (to accompany the Budget Requests) was all about the need for federal level research and development of AI (Artificial Intelligence) for non-defensive use.

Taxpayer funds to pull this off? $142.2 billion. This leads to “Industries of the Future” and will embed STEM (Science, Technology, Engineering, and, Math) into even more of our schools, at ALL age levels and our entire workforce.
A $50 million dollar amount is to go to the NSF (National Science Foundation) to targe community colleges, HBCUs (Historically Black College/Universities) and Minority Service Institutions (MSIs). NSF will receive another $230 million for QIS (Quantam Information Sciences); at least $25 million will be for a national Q internet.

Where else will the STEM ‘education’ pop up?
U.S. Dept. of Energy, $125 million for AI. Energy’s Science Office will receive $237 million for national labs, national education, and national jobs.

Also in the press release, was the directive to insert AI into every single federal agency’s budget to report to Congress, including U.S. Dept of Education! This is called the “American AI Initiative”. This will also harmonize QIS across all federal agencies as well (ties back to the 2018 law, National Quantam Inititiative Act.) This Act embedded a school to work pipeline for STEM. This Act, as well as the FY 2021 Budget Requests increases the amounts of P3s (Public Private Partnerships) in America, for economic and job purposes. 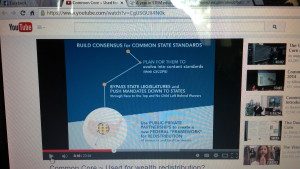 Warriors, here’s the Budget Requests document. The U.S. Dept. of Education’s portion can be found, beginning on Page 39.

However, well before Ed’s portion, you can find ‘education’ mentioned. For example, on Page 5 (under the section “Building a Better Tomorrow”), you’ll find closing the ‘skills gap’ by increasing vocational tech under CTE (Career Tech Education) and increasing apprenticeships. Cost? Nearly $1 billion dollars exclusively for CTE. Contrast that with Page 7 where fewer education and training opportunities for tech based global economy will suffer if we don’t step it up. Then, on Page 21, learn how by involving the ‘private sector’ into government will be an economic gain, but also tie to education ‘attainment’ levels. (*Note: The USMCA aligns education attainment to jobs available.) 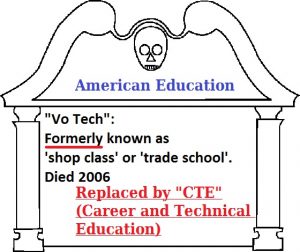 What else ties to ‘education’ in this section for Better Tomorrow? SNAP benefits, Page 25; Page 26, WIC funds reach $5.5 billion. (Both are used in school systems).

Warriors, 5G is already proving to be found in education at ALL levels. Why are we seeing DC ignore evidence about the harmful effects?

As I stated above, the U.S. Dept. of Ed’s portion begins on Page 39. There you’ll see $66.6 billion is being asked for.
But you’ll also see ESEA (Elementary and Secondary Edcuation) Block Grants for Disadvantaged Students ($19.4 billion) on Page 40. Don’t overlook HOW these grants will be designed. The Every Student Succeeds Act’s (ESSA) recalculation of Title One is involved. If you remember, that went from per pupil need to ‘whole school’ for the ‘whole child’.

Also on Page 40, $2 billion in State Grants for CTE. Then, the ‘famous’ $5 billion in education scholarships (a rebrand of ESAs, Education Savings Accounts; or vouchers) for ‘educational freedom’. IDEA funds (Page 41) get $13 billion.

Also on Page 40,two very telling quotes. What do they tell us, Warriors, that neither one of these officials has read
the ESSA!

On Page 42, how accrediting bodies in education need to be reformed for ‘innovation’. Warriors, ‘innovation’ is an educratic term for massive data mining! Also to be ‘reformed’? FAFSA. Don’t miss the ‘evidence based evaluations’.
Look below and you’ll see the other educratic plans and page numbers.

Warriors, be sure to read the featured quote by Ivanka, pushing ‘skill based’ education.

Closing:
In Part Two, my fellow Warriors, we’ll look at the ‘skills’, ‘jobs’, ‘mental health’ and ‘global’ evidence in the Budget Request document. You can bet, education’s impacted in not so great ways.