Here in NC, the “Common Follow Up System” has been in place since 1992! How is this part of the agenda that comes with “Common Core”? Keep reading, my followers and anti CCSS Warriors..

The purpose of a “Common Follow Up System” is: “The purpose of the Common Follow-up System (CFS) is to provide information on the educational and employment outcomes of participants in publicly supported educational, employment and training programs for use in planning, policy-making, program evaluation, resource allocation and career planning.”

Do you see the CCSS/CTE footprints? I do. If you don’t, look at the emphasized words. Publicly supported education means schools or programs connected to them. That’s the CCSS portion. The employment and training is the Career Technical Education (CTE). The two are one in the same in that the CTE portion of the Common Core begins well before high school graduation.

In the earliest years of the CFS, a longitudinal data base system was formed. The system tracked each person’s progression through the state’s workforce; to study their paths of progress to see what education or other factors were involved. In 1995, the NC General Assembly helped the data collection efforts. (See Chapter 96 of the NC General Statutes). Since 1996, interest in all this data collection has increased quite a bit. Here’s an excerpt, “Several groups turned to the CFS as a valuable source of quality outcome information for education, employment and training programs. The increased interest was due to initiatives at both the state and national levels regarding the collection, calculation and reporting of performance information throughout the education, employment and training system. These initiatives included the development of reports for the Commission on Workforce Development“(and others).

Now, as I’ve uncovered in the past, the CCSS Machine grinds on via the Career Pathways, Career Clusters, the Career Technical Education. I’ve shown you how each is a ‘marriage’ of education and workforce. So have others who’ve been fighting this War for our students. We’ve shown how the dots connect FROM education TO the Workforce AS WELL AS how legislation (state and federal) have PROTECTED this union. “The Workforce Quality Data Initiative” is a program I’ve reported on that has the main purpose of data mining our post secondary students from the labor aspect of their lives. Embedded in this program is language which plainly states it will join the data mining efforts from the Student Longitudinal Data System from the education aspect of the K-12 students. (see my article: https://www.commoncorediva.com/2014/10/23/tech-thursday-blast-from-our-workforce-past/) You’ll find that back in June 2015 I shared this article with you: https://www.commoncorediva.com/2015/06/07/rmt-halting-a-ccsscte-aligned-workforce/

Back to the CFS:

Added to the grant given by the U.S. Dept. of Ed, the NC General Assembly boosted the data mining once again. State law 2012-131 gave the NC Dept. of Commerce the green light to ramp up data collection AND storage projects. See this, “As part of its efforts to improve the CFS, the Department of Commerce applied for a competitive grant with the U.S. Department of Labor’s Employment and Training Administration through their Workforce Data Quality Initiative (WDQI). The Department received notification in June of 2013 that North Carolina had been awarded a WDQI grant. The grant covers a three year period ending in June 2016. Grant funds are being utilized to further strengthen and enhance the CFS.”

*Note: In my June 2015 “Halting CCSS/CTE Aligned Workforce” I shared that NC had been awarded big bucks. Now I know where those big bucks specifically went. Thus, the last remaining dots of the agenda are exposed. Boom!

One of the programs the WQDI money gave NC is known as the “NC Tower”. The “Tower” stands for “Tool for Online Workforce and Education Reporting”.  Every one of the 16 University of North Carolina’s campuses, the 58 statewide Community Colleges has your post-secondary students data (and lots of it)! To see just which groups GET that data, see page 7 of the report. Page 8 of the report will tell you how the NGA (National Governors Association) is NOW involved. Here’s a small ‘tip’ for you to consider, “In July 2014, North Carolina submitted an application to the National Governor’s Association (NGA) Policy Academy for Aligning the Education and Training Pipeline to the Needs of the Economy. The state received notification in August 2014 that its application was successful. This initiative is a collaboration of the Office of the Governor, the Department of Commerce, the North Carolina Community College System, the Department of Public Instruction and the NCWorks Commission. This effort will assist the state in aligning its education and workforce resources, strengthening its services to citizens and businesses, connecting talent to jobs and growing North Carolina’s economy.”
Also involved is a group identified in the report as “Lead Staff”. “Lead” stands for “Labor and Economic Analysis Division”. See below for just how many NC students have been data mined since the CFS’s inception. 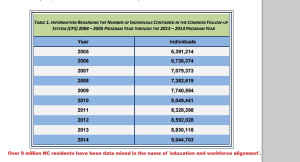 Page 13 of the Report shows how many NC organizations are NOW part of the CFS. To access the entire report:
CFS-Operational Report-May 2015
To access the NC Tower, so you can see just how much of the NC grant money from the WQDI  was used, visit:
http://nctower.com/
To see a related article about the data mining in NC concerning the NC General Assembly, see my fellow warrior, Lady Liberty 1885’s article: http://ladyliberty1885.com/2015/04/20/parents-are-you-watching-data-collection-expansion-bills-hb401-and-hb767/
To see what the ‘education-to-work’ plans for those who are considered ‘at risk’ looks like, how the money will flow, the data mined, and more, see: Made in Durham PRINT 11 13 12-FINAL_0 (*Note: the CTE, Career Technical Education, shows up on page 16. Durham County, NC is also where SAS, IBM, and others like them in the CCSS Machine call home office. SAS, IBM, and the others are all in the same business: computers and data. Why did I include this report? Look at the amount of ‘national research’ involved for education/workforce.

The title of today’s “Tech Thursday” article is about money following our students. This is in reference not only to the current proposals of legislation about federal and state dollars being used as student savings accounts which would follow our students from education to workforce, it’s also in reference to the vast amounts of money which have already created a system that tracks our students. The difference is what may be yet to come will most definitely continue the CCSS Machine’s agenda via more initiatives to align, while what has happened, paved the way for the CCSS Machine’s agenda to succeed so far.

So, does your state have a CFS? If they have a state wide Dept of Commerce, have received federal grants for data, education, and/or workforce, have applied to the NGA for grants, AND had a cooperative state level Congress, it’s more than likely already well entrenched.
Here’s a report from 2013 out of Utah titled “Report of Select State Practices for Aligning Educational Supply with Occupational Demand”. asa_2013-05-23_alignment_report (page 7 shows all the states contacted as resources)
One of the nationally based initiatives cited in the 2013 Utah document is the U.S. Chamber of Commerce’s “Leaders and Laggards”. See their website: http://www.uschamberfoundation.org/reportcard/