You’ve heard and read several times over about the global overreach in American education. So, finding out one more way in which it is playing out across our nation won’t be welcome news. It will help us make sense of how un-American the 2017-18 school year will be. This will not only be for our beloved students, but our teachers, as well.

What Prompted Me To Even Look:

Recently, Warriors, I saw a post on social media (several Warriors had shared this) about  NY City Schools deciding to ditch graded assignments, where no one was going to receive a failing mark, and where NO pressure to learn. In fact, the NY Times published this article.

If you don’t have time to read the entire article, I’ll sum it up:
Competency based education (CBE) on heavy doses of technology, Common Core, and a host of sold-out to the CCSS Machine beliefs. All through a program called the Mastery Collaborative.  If you look at the fine print of the article, you’ll see it wasn’t written by the NY Times, but by the Hechinger Report. The Hechinger Report is up to its eyeballs in the CCSS Machine member organizations and their checkbooks. The only good news in the article is that Jane Robbins is mentioned as being critical of the entire  CBE system.

When you look at the screen shot below, notice the look on the faces of the students. I’m not sure if their looks of non-excitement are due to the fact of their school work is boring or that it’s the middle of summer and they’re in a classroom. 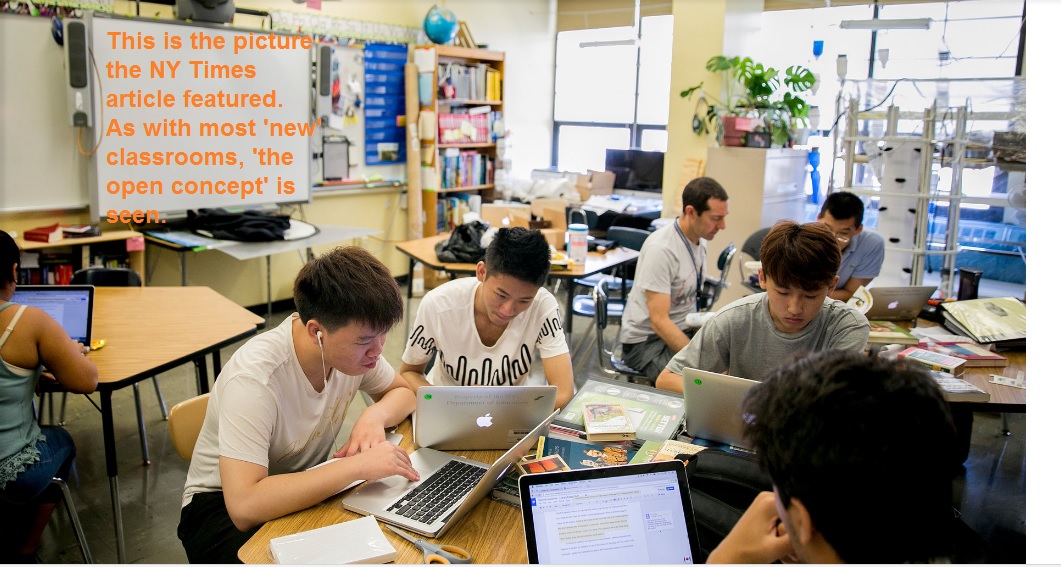 Warriors, here are a few facts:
1) CBE is not new to America, or to the NY City school system. Thanks to WIOA*, HEA*, and ESSA*, CBE is on the rise. It’s also got global roots.
2) The high school you see above is Flushing International High School in Queens, NY.
3) You can find out about the school here (look for Page 484).
4) The article tells you all about the Mastery Collaborative, but leaves out that the former name of the CBE program was Digital Ready.
5) Many NY City Schools receive Apple computers. Apple partnered with the Obama Administration’s ConnectEd Initiative and has given thousands of computers ever since. (Look up at the screen shot again, what brand of computers do you see?)
6) Part of the framework the NY City School system uses in strong family/community connections to schools.
(*Note: to find out where I found the facts for 4, 5, and 6, from the NY City School system, look here.)
7) To learn more about the Mastery Collaborative, go here.
By the way, Warriors, here is one of the chief mindsets of Mastery learning (CBE): “Everyone understands how to succeed, because expectations are shared from the start. Basing grades on objective outcomes narrows the chance of implicit bias in grading. A growth mindset approach means that students hear “not yet” or “approaching mastery,” instead of “you fail.” “

The points I want you to take from NY are these:
1) open design classrooms
2) any time of year (think year-round)
3) strong family/community/school ties which are meant to control
(Warriors, keep these in mind. I’ll show you a 2009 UN document which embodies these very ideas.)

Next Up, North Carolina’s Globalness:

Warriors, you know this isn’t the first time I’ve shown you how ‘globally competent’ NC is making education. To see where the 2017-18 school year is going, let’s take a step back to 2013 first.  Look below: 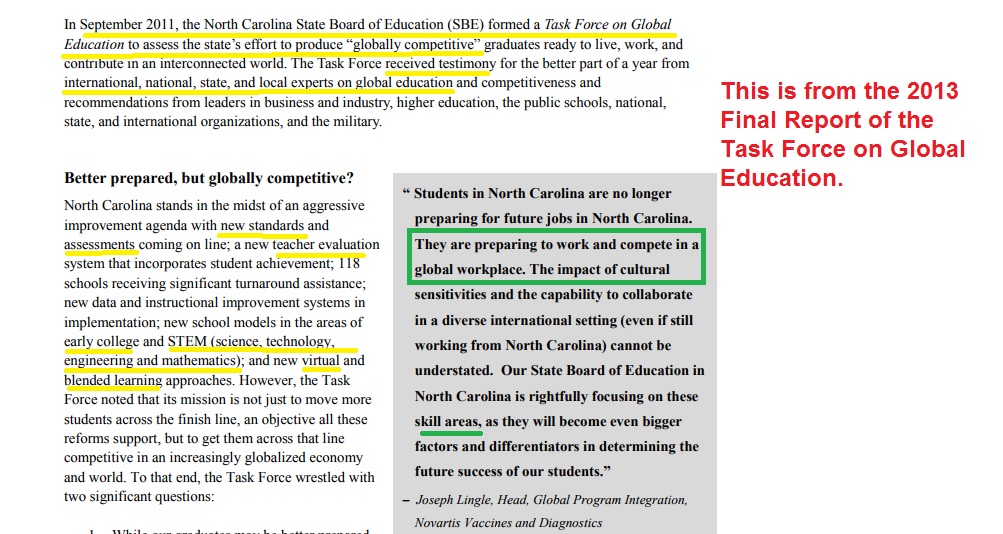 Part of the rhetoric and justification for NC’s openess (overtness) to being ‘global’ is simply stated in the 2013 Report, ‘if it’s not sustainable, it’s not strategy.’
Consider this quote featured in the Report:

To see both the ASCD and the latest for NC’s global love for ESSA and education, be sure to read my recent article.

The points to take away from NC:
1) global shifts in education are cemented into our States (including legislation).
2) as the shifts continue expect the ‘sustainability’ propaganda to ramp up.
3) globalizing means massive data trails, regardless of education choice or age.
(Warriors, again, keep these in mind. They too will be found in the UN 2009 document.)

Overt Moves in FL:

This open move to shift education in America to a UN supported global mindset (manipulation of beliefs) has raised lots of concern. What is it? A behavior molding system used on students as young as kindergarten! 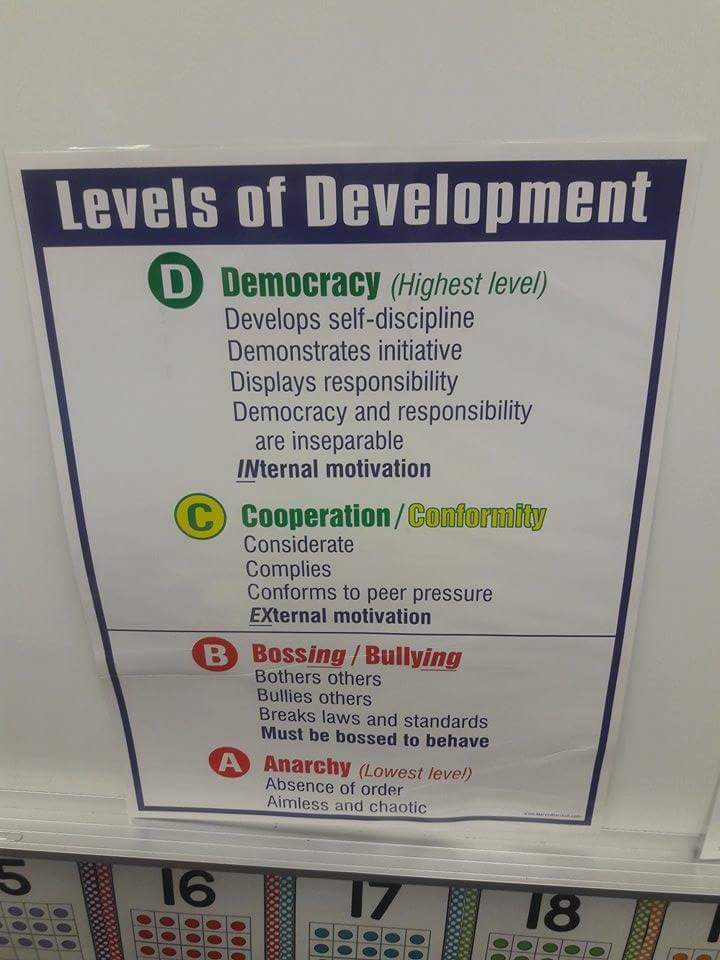 Fellow Warrior, Nancy Bailey just published her article on the mess. What I uncovered about the behavior system which is NOT exclusive to one school (it can be found nation-wide, as well as globally) can be seen below in a screen shot version of a Facebook conversation from the featured school: 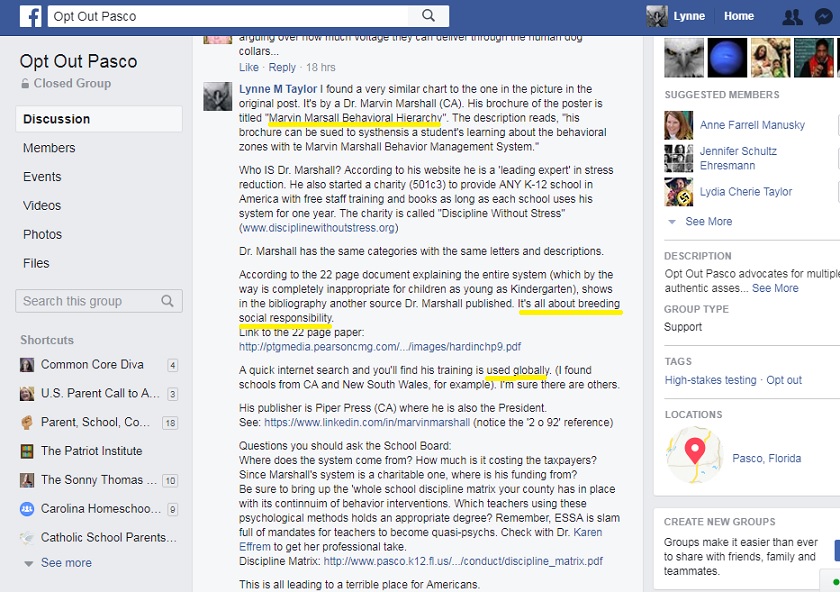 To see the entire thread of conversation, visit here. Warriors, be sure to note that ANY behavior intervention is NOT curriculum, but a practice of services!

Long time Anti Fed Ed Warrior, Anita Hoge has been warning us for years about the SEL (Social Emotional Learning), as have many other modern-day Warriors. SEL is most definitely a part of the UN’s SDGs (Sustainable Development Goals), most especially from the early 2000s American created ‘Tool Kit’!

The overall attitude of the SDG Tool Kit is to use education as a ‘change agent’ for shifting attitudes, values, and beliefs. Another dangerous attitude is the fact that all this change is comng from WITHIN our established school systems and communities. 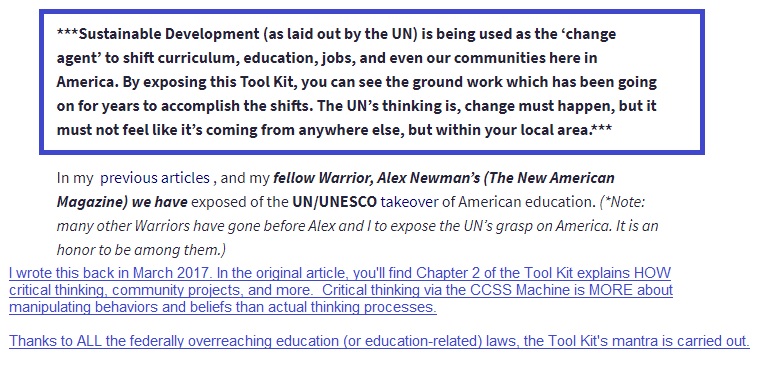 For the third time, Warriors, keep all this from FL in mind. You’ll see how this, too, connects to the 2009 UN document.

By now, I’m sure you are puzzled as to how much of this PAST activity is going to be played out during the 2017-18 school year?

Simply put, as long as the US kowtows to the United Nations and their SDGs, we will NOT be free of the constant shift in education we are seeing. Why? Among the 3 top ‘designs’ behind the agenda to conform the entire planet: Economy, social, and environment. Education is the ONE unifying ‘weapon’ to solve all 3 designs.

How do we know? For starters, check out my fellow Warrior, Alex Newman’s latest article (screen shot below with added emphasis): 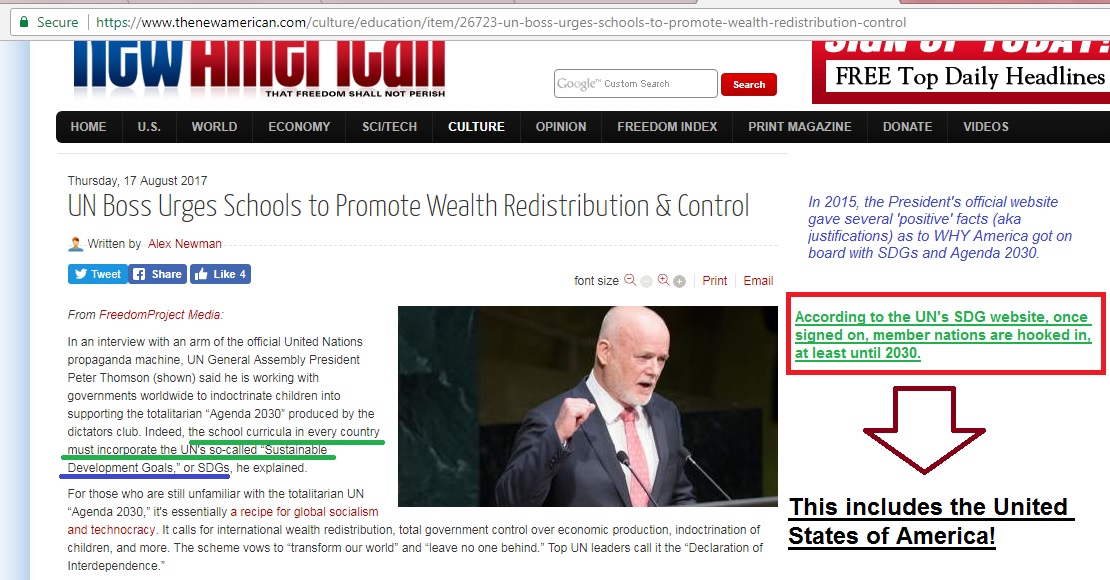 To see the Obama ‘Fact Sheet’ on committing America to the Agenda 2030 and the SDGs, visit here.

To see the position of the current President on the nation’s economy and the SDGs role, visit the University of Indiana’s Maurer School of Law researched document.
(*Note: Page 22 is where you’ll see the connections. However, read the preceding pages first to get the full context.)

**Warriors, the bottom line is the Trump Administration is hyper focused on jobs and the economy. We’ve seen recent news on the President and other leaders touting the importance of aligning education to workforce (job) needs for a better economy!

**Warriors, it doesn’t matter which political party our leaders (national, state-level, or local), when the powers-that-be committed us to this agreement, it meant every single citizen.

From 2017: The Technocracy News and Trends article (Aug. 16, 2017) where the same UN boss as seen above is speeding up the implementation of the SDGs. For how it will continue to be seen in education across America and to find out the team tasked with ensuring all member nations comply, go here.

From 2015: An excerpt from the UN Declaration for SDGs/Agenda 2030, “We, the Heads of State and Government and High Representatives, meeting at the United Nations Headquarters in New York from 25-27 September 2015…have decided today on new global Sustainable Development Goals. On behalf of the peoples we serve, we have adopted a historic decision on a comprehensive, far-reaching and people-centred set of universal and transformative Goals and targets. We commit ourselves to working tirelessly for the full implementation of this Agenda by 2030….We are committed to achieving sustainable development in its three dimensions – economic, social and environmental – in a balanced and integrated manner….As we embark on this great collective journey, we pledge that no one will be left behind…This is an Agenda of unprecedented scope and significance. It is accepted by all countries and is applicable to all..”

One note, Warriors, in accepting this Declaration, it also accepted any and all previous UN agreements (ie: the Brazilian meeting where Agenda 21 was accepted, etc.) 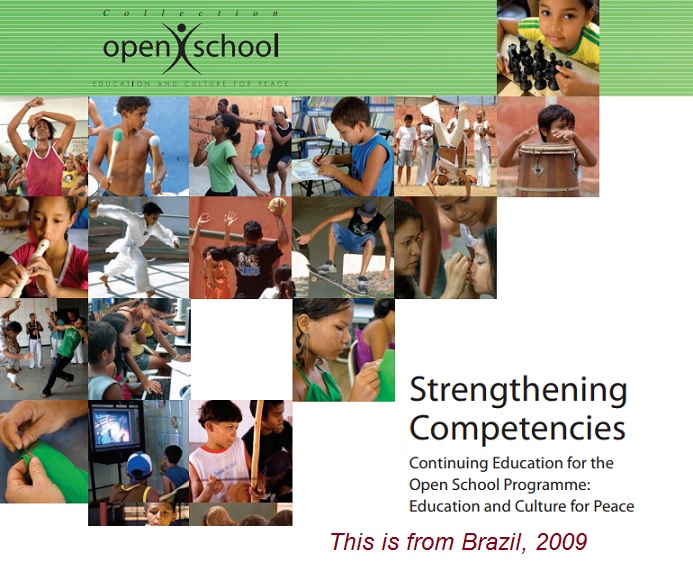 So how does this fit into the current American education reform? 1) Competencies (as in the CBE shift from NY near the beginning of this article); 2) Lifelong education (as in the global birth to death shift we saw in NC, above); and 3) Social programs (as in the social behavior manipulation from FL, also above).

Every single one of these UN-derived threads is woven into the ESSA via: 1) digital and technology mandates, 2) competency, skill based assessment mandates, and 3) increased social emotion behavior management. These threads are woven very craftily to entangle not only the students, but the teachers, parents, and citizens. These UN planned threads will be in the hands of businesses and government. NO exceptions.

Warriors, if you still do not see how Open Education from the UN is in America, check out the OEC (Open Education Consortium: The Global Network for Open Education). According to their website, at least 3 Americans serve on the Board of Directors.

For contrast, if you’ve seen the NPR article about how “open schools are dead in America”, I urge you to read it. It claims ‘open ed’ started in America back in the 1970s. It also states that some of the threads have survived. (open classrooms, collaboration, student-led lessons)