Live From the US!

Warriors Against the Core, Anti CCSS Warriors, and Anti Fed Ed Warriors:
School’s back in session, or almost ready. Are we?

Thanks to the CCSS Machine’s grasp on the classrooms and every outlet connected  to them, (ie: public libraries, museums, etc.) Several States have begun pushing their ‘academic’ calendars up so much, there’s hardly any summer vacaction at all for the teachers, leaders, or students. Think of it as “Live From the US: Conformity!”

You see, to have ‘lifelong learning’, you have to produce an atmosphere of constant information being fed into the minds of those ‘learning’.

As far as the CCSS Machine is concerned, once your student (or, even you as a student) is  hooked into the ‘lifelong’ part of education, they will not be free of it. That’s why ESSA was so heavy on the digital and technology portions of the mandates.

Remember, Warriors, I shared with you over 1 year ago how the digital overloads in ESSA were setting us up for 365 days of 24/7 computer access. If you missed it, find it here.

Of course, since ESSA’s passage into law, you’ve seen many of the CCSS Machine member organizations bend over backward to bring you every conceivable digital and technology based known to humans. This applies to our States, as well.

The accepted ‘sales pitch’? All this technology will lead to jobs..jobs for the 21st Century. No, the ugly reality is it isn’t about giving Johnny and Suzy a leg up, it’s about controlling Johnny and Suzy’s lives.

Because ‘lifelong learning’ is now a de facto part of education, we’ll continue to see a constant flow of data. Accountants would refer to it as FIFO, ‘first in, first out’. Data makes money for everyone in the CCSS Machine..as well as everyone connected to that Machine, EXCEPT those being educated/indoctrinated.

Look below for a photo by Will Lion depicting the data overflow: 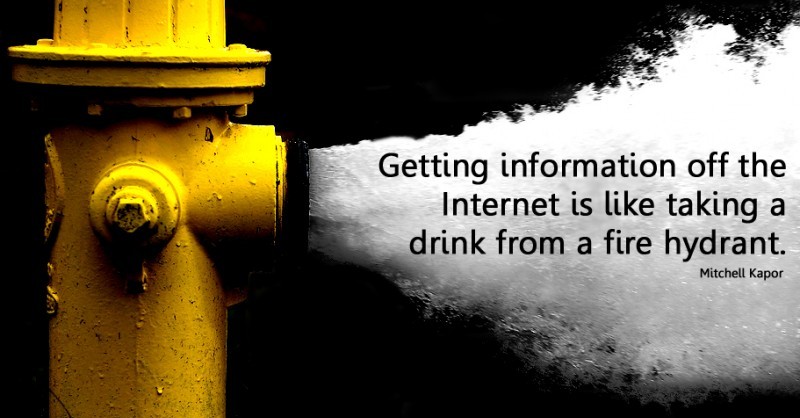 According to the article this photo was featured in, our brains take in as much information in a single day, as one of our 15th Century counterparts would take in throughout an entire year. This article also points out that when it comes to too much computer time, it’s still a people problem, not a machine’s.

However, Warriors, consider this in the context of school days. So much pressure is exerted to learn more, learn quickly, and then take a test. This doesn’t even cover the constant assessment algorithms embedded in every computer activity used in education. This applies to teachers and students.

Again, ESSA’s assessment mandates will keep the alignment to these constant measures up. Most, without parental consent or knowledge. Think of this as “Live From the US: Mental Abuse!”

**What if you have an older student, or, are the adult student? Because ESSA’s education standards are aligned to the ‘post-secondary readiness’ standards of WIOA (Workforce Innovation and Opportunity Act), you’re hooked in as well!

Education is being revamped SO much so, it hardly resembles anything worthy of participating in! Our teachers are being conformed to a strict format, our students are being plugged in younger and younger each year..and for longer periods of time.
Think of this as “Live From the US: Intentional Frustration!”

It’s all part of the slick propaganda to ‘rethink’ how we learn or educate others. It’s also a big step to global conformity. (*Note: the global conformity is even being unleashed on private education and home education. In this previously published article, I showed  you how UN (United Nations) ideology is ushered in via clubs. Toward the close of this article, you can see the same ideology ties to STEM.)

One of the biggest “American” education propaganda pieces which fits nicely into the global conformity is STEM (Science, Technology, Engineering, and Math). STEM is embedded in ESSA and WIOA (don’t forget the HEA, Higher Education Act) in several ways. Mainly: Career Tech Education, Career Clusters, Career Paths (or Pathways). STEM also will unite the ‘lifelong learning’ to jobs (ie: workforce). If you doubt the connections between STEM, the UN, and the workforce, I urge you to read and consider this.

Before we move on, be sure to read about the Global STEM Alliance (started right here in the USA) as part of First Global (Dean Kamen).

The connection to the CCSS Machine is quite simple: Dean Kamen (think Segway inventor turned STEM guru) has received funding from Coca-Cola, The Gates Foundation, Toyota, and Johnson/Johnson for some of his work in health care equipment. For the First Global? The main funder: Toyota, a well-known CCSS Machine global member organization. Toyota’s also big on STEM. (Source)
If you’d like to see how the World Bank (also tied to the global education reform) is working with Kamen’s First Global, visit the blog.

“Live From The US: New High School?”:

I recently saw this (below) in a well known magazine which has zero to do with education.

The full page ad shared a little about how over the past 100 years, our education system has remained the same and how it’s time to ‘rethink’ it, especially for high school.

I first wrote about XQ back in 2015. Then, I recently re-visited the CCSS Machine member organization. The earliest article (Sept. 2015) exposed “Project XQ’s” part in “Redesigned High Schools”. Also involved? Apple, Inc., ConnectED, and other educratic partnerships. The second 2015 article featured the CCSS Machine’s chokehold on network TV for ‘educational purposes’. You’ll be able to see other CCSS Machine member organizations and how XQ became partners with them for “National Graduation Day”.
Warriors, think of it as “Live From the US: Indoctrination by Broadcast!”

Speaking of ‘broadcast’, below is XQ’s Super School Movement. There are already 10 in operation across America.

Warriors, do you notice XQ can be tied back to the U.S. Dept. of Ed as well as Steve Jobs’ widow? (or visit here) Warriors, the EIF (Entertainment Industry Foundation) was begun in the 1940s. It’s got globally reaching arms in education, cancer research, and other projects. From their 2015 Annual Report, “Think It Up” page, you’ll see the globally overreaching CCSS Machine members: The Gates Foundation and EXXON Mobile as key ‘support’: 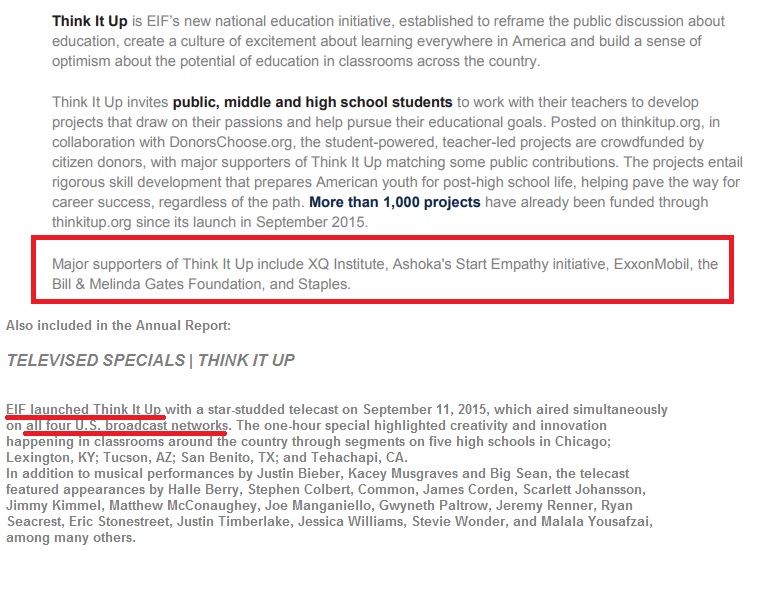 Warriors, according to the EIF 2015 990 form, the group has lobbying power as well as foreign grant making powers.

Live From The US: Digital Promise, ESSA, XQ, and UN’s SDGs!:

If you didn’t know this, here’s the original documentation from the Obama Administration, creating DP.

If you missed the ESSA’s embedding for DP, find the references to not only DP, but the other digital/technology ESSA strangleholds here. (*Note: this article also reveals how Digital Promise was embedded in the HEA, Higher Education Act.

By ESSA tying to WIOA and HEA, what’s in one law, will show up in all 3 in some fashion.)

If you’d like to see how the ESSA/DP is playing out in real time in NC, click here. (*Note: look at the leadership involved in your State. Are they pushing for digital overloading your schools?)

So, how does DP play into the UN’s Sustainable Development Goals? How does XQ fit into all this?
Digital Promise’s own documents! For starters, look at the CCSS Machine members who are funding DP: Then, look at this evidence which ties DP to the UN’s SDGs(*Note: Digital Promise Global was launched in 2015): 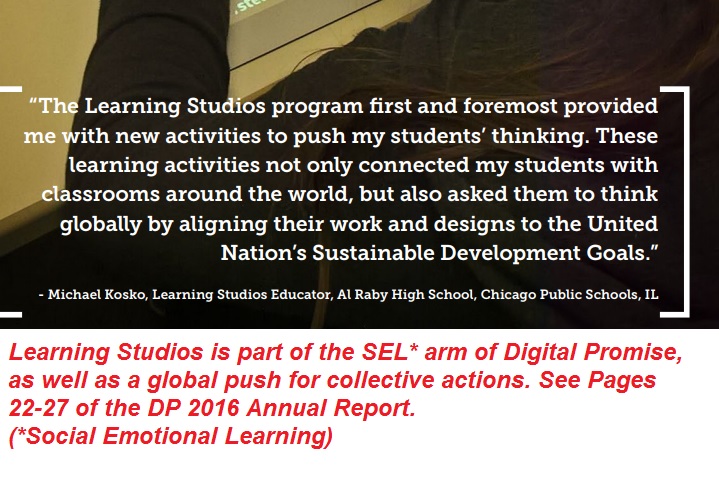 You can access the DP 2016 Annual Report here.
As far as the teachers, DP has much to do with their alignment to digital CCSS Machine ways. Because of this, you’ll see LESS deviation from a prescribed format. This means LESS freedom for HOW teachers will be able to exercise teaching abilities.

Warriors, think of it as “Live From the US: Globally Aligned Manipulation”!

Warriors, earlier in 2017, I showed you how Project XQ was part of the undermining of local schools..the very ones your students may very well be in or heading to. 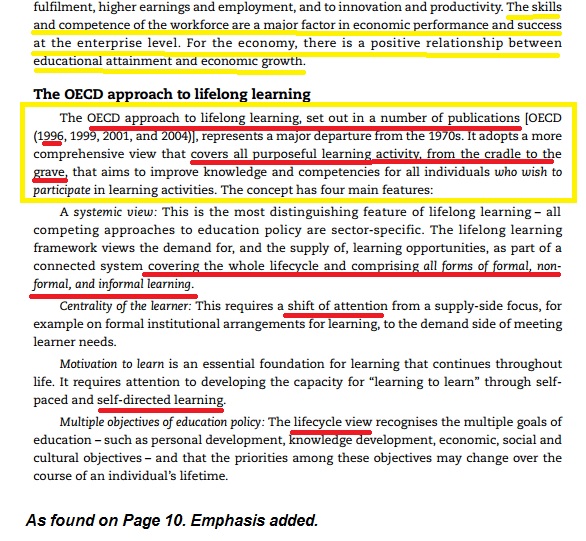