“Friend” Of The Family

Greetings fellow Anti Fed Ed Warriors! September 2017 is upon us.

Look below. What you see is actual evidence from a concerned Mom from the Raleigh, NC area.  She’s been with me, fighting the CCSS Machine in NC, for quite a while now.

This is the front page of the letter received by the concerned parent.

Next, is the middle page of the letter that was sent home.

This form, as you can see is in the event you have more than one child in the same school system.

Below, is the back page of the letter received.

Warriors, from the appearance of this part of the letter, all the data issues seem to be ‘not a big deal’, but as we know, all is never as it seems when it comes to our child’s personal information OR their school data.

To complete the guise of ‘friendly’ research data gathering, the folks behind the Wake County School System and the Harvard team, even give you a postage-paid envelope to mail the letter in!

Warriors, I’ve repeatedly shown you have up to its neck in CCSS Machine business Harvard University has been over the course of my published blog.

From their partnership with Pearson Publishing to create the “Pathways to Prosperity” which in turn spur on the “Career Pathways” of the CCSS (Common Core State Standards), STEM (Science, Technology,Engineering, and, Math) and the CTE (Career Tech Education) alignment, as well as create a hotbed for social justice alignment. Then, there’s the micro-management of school counselors with the co-operation of former President and First Lady Obama, which will impact students in K-12th and/or college, where the Harvard grab for adult learners  goes into hyper-drive.

We can’t leave Harvard’s activity in the CCSS Machine there, Warriors. The University has played a big part in the Career Pathways transformation to CBE (Competency Based Education), right along with InACOL, the Gates Foundation, and others.

Oh, and if you didn’t know it, 3rd grade students (and older) can thank Harvard for their undermining reading and writing for job skill training!
The final blow to Harvard’s ‘respected’ reputation, at least as far as an anti Fed Ed Warrior’s perspective goes, will be the global education push that Harvard pitches us into as part of the GECN (Global Education Conference Network).

Now they want us to TRUST them with sensitive school details?!

“My Student’s Team” by the Harvard Research Team.

When you visit the website (embedded in ‘team’ above), you will see almost nothing. There’s  very little wording. As far as the school districts using “My Student’s Team”? Three. One is Manchester Public Schools, another is Winsdor Public Schools. Wake is the only school system which is a county-wide one using the ‘friendly’ student support team.

What does the Team do for the student?  As it appears on the first page of the letter my fellow Warrior received, it looks like a non-family member contact for your student. But notice the wording. I’m going to give you full access to my student I’m interested in knowing more about permission to access his/her behavior records?!

I understand, Warriors, this is a research project with a rubber stamp, but rubber won’t keep data safe.

The letter states a team member should be one who’s interested in knowing more about a student who’s a) not a parent, b) not normally in contact with the school, and c) by the legal guardian! Warriors, do you see what I see?

STRANGER DANGER!
We (meaning those who consent) are to readily and willingly hand over sensitive information to a nameless, faceless ‘team’ via the post office!
By allowing these people I don’t know very well/don’t know at all because they live so far away, what am I really signing up for? Who will background check my choice of ‘support person’ for my student? Who is going to be looking into MY records? For what purpose?

From Raleigh, NC to Harvard, MA is over 700 miles. It also passes through several States, thereby crossing state lines. Is this safe? Is the submission of consent by this ‘non-parent’ giving FULL disclosure? Do those signing this paper realize that given consent means whoever or whatever group Harvard shares this information with will be deemed as ‘okay’ by you, under the current FERPA regulations?

Warriors, because FERPA was changed and large loopholes exist NOW, no agreement seeking your permission should be trusted as ‘safe’!

(*Note: if you are ready to keep your student’s data safe, or, to see FERPA restored so that your child’s information IS safe, please join the grassroots national campaign called “Child Abuse in the Classroom” today!)

Warriors, how DID Wake County Schools get the attention of Harvard University to become an experimental research subject?

One connection I found was a 2016 Conference listed on Harvard University’s website where an official from the Wake Co. system was featured as a speaker. The Conference was one for SREE (Society for Research on Education Effectiveness). You’ll be interested to know that the CCSS Machine member organization, AIR was a main sponsor. (AIR is short from American Institutes for Research)
Two of the SREE Board of Directors are Harvard University employees. AIR is also represented on the Board of Directors.
According to the Gates Foundation Grants website, SREE has received 2 grants. Both were in 2013.

However, it’s  Matthew Lenard (green arrows) which is the name connecting the Wake County Schools to Harvard.

His resume is steeped in the CCSS Machine’s rhetoric.
He’s held a position with SREB (Southern Regional Education Board) which has received funds from the Gates Foundation as well as other  big name groups shoving the modern education reform down our throats.
In fact, SREB is one of the main groups using CCSS Machine money and resources to push the agenda onto school leaders, especially the counselors! (*Note: the highlighted phrase will give you access to every one of my SREB researched articles)

According to his LinkedIn Profile, Lenard is with the Wake County Public School System as a data and accountability officer. Here’s a quote, ” I joined WCPSS through the Strategic Data Project (SDP), a initiative housed at the Center for Education Policy Research at Harvard University. SDP partners with districts, school networks, and state agencies across the U.S. to transform the use of data in education.”

Lenard is tapped for the SREE 2018 Conference, where a featured speaker from WestEd will lead the attendees down the data strewn path of student information.

Below, is a screen shot for the SDP (Strategic Data Project). Wake County’s been a partner since 2011. Gates Foundation grants to SDP: two, 1 in 2017 to the State of KY’s Dept. of Education for the data mining and one in 2012 directly to Harvard. Source

Related:
This 2010 You Tube video features a woman from the IES speaking to an SREE audience about ‘practice guides’. Listen about the 1:14 minute mark when you’ll hear how behavior modification was almost casually mentioned. While the direct link in the comments to the video no longer exist, I did find some IES Practice Guides which may very well be the type of behavior modification the woman was referring to. In the modification plans? Multi-tier support and Response to Intervention. Both of these are ESSA mandates for our children.

From Harvard’s Center for Education Policy Research, this screen shot from a 2016 Survey Report.

Since we’re in the latter part of 2017, and this Report is still awaiting student data, where has the data been since collected? Warriors, do not only look at what we’re being told, but also ask about all the other details being left out on purpose! (*Note: by clicking on ‘Research’, you’ll be able to access the Harvard Center for Education Policy publications.) 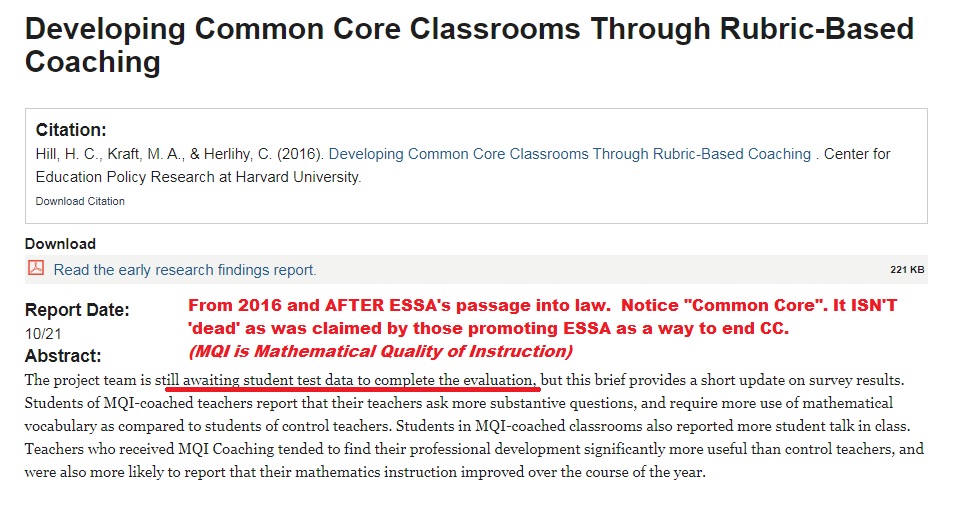 Warriors, since we know ESSA’s mandates include assessments. Research like this will continue the assessment alignment cycle going.

Warriors, we know the data mining is intrusive. We know it violates our civil rights.
My most recent NC interview where we talked about data in the classroom. (Sept. 3, 2017)
I thank the CCTA (Coast Carolina Taxpayers Assoc.) for inviting me. (*Note: I mistakenly used the amount of $89 million in reference to the ESSA funds set aside for digital and technology. It should be $849 million.)