Expansion At What Cost?

Anti Fed Ed Warriors, with all the attention being focused on the DC circus-like behavior, did you know the U.S. House passed a Bill late last week? This Bill (HR 6757) is a thief dressed as taxpayer savings. The thief is headed straight for the schools and our homes, too.

PA Rep. Mike Kelly introduced HR 6757 in early September 2018. As of the end of September, it’s heading for the U.S. Senate. Fast tracked Bills mean the CCSS Machine is up to something, Warriors.

Warriors, the bottom line surrounding HR 6757 is this:
Expansion of government to create the ‘end’ of school choice discrimination. How? By messing with our taxpayer dollars. (*Note: Jeb Bush, a huge CCSS Machine member has been pushing ESAs, education savings accounts for quite a while. So has Sen. Lamar Alexander. Sen. Alexander was also one of the major Congress members who promised America that ESSA, Every Student Succeeds Act, would give education back to the States. He lied about that, Warriors, he’s lying about ESAs, too. Lastly, Heritage Foundation and Sen. Alexander have a connection. Heritage is in full support of ESAs under the illusion of ‘school choice’.) 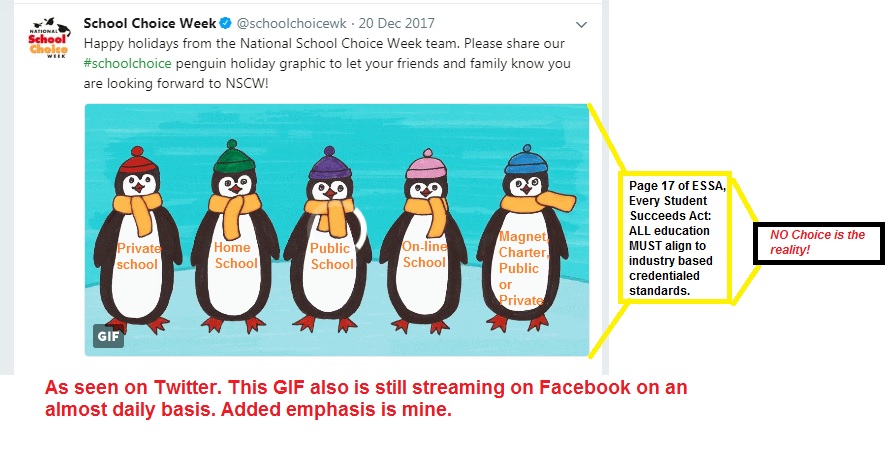 HR 6757 seeks to amend the Internal Revenue Code from 1986, too. Supposedly, if enacted, it will save families TONS of money (The Bill is called the Family Savings Act).

Warriors, you may well remember that the 1980s brought us President Reagan. Reagan chose Charlotte Iserbyt to help end the U.S. Dept. of Education. She was fired instead. Mrs. Iserbyt has been warning us since the 1980s about the globalization of American education; how education savings accounts will be used as tax schemes to turn schools into workforce prep institutions.

What is Congress REALLY setting us up for with bills like HR 6757, Warriors? Look below: 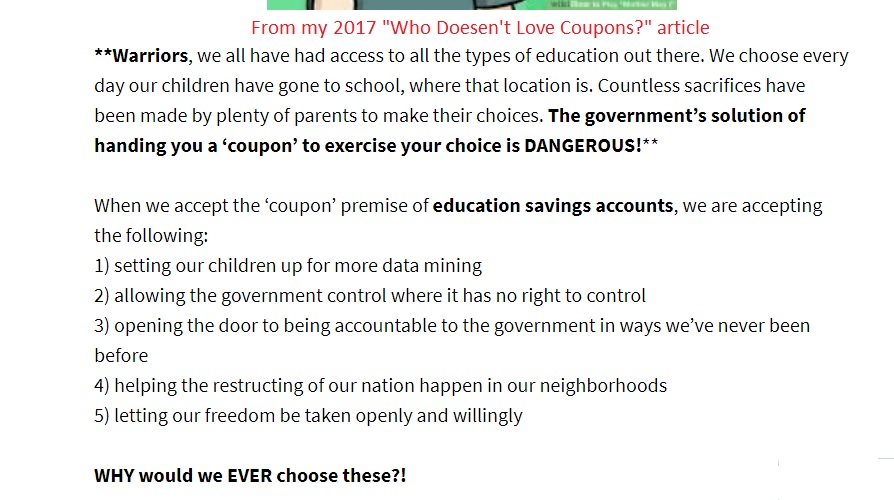 Our current President (Trump) and Vice President (Pence) even used school choice and vouchers as part of their plan upon coming into Office. President Obama was big on ‘choice’ and the expansion of charters.

From 2017, Freedom Project Media’s 3rd video in their series called “Alternative Education in the Crosshairs”. This segment laid out the illusion of school choice and ESAs. If you’d like to view the other 3 segments, here’s my article featuring them.

Warriors, very few major media outlets reported on HR 6757’s passage by the House. The spin was sunshine and roses, too.
PR Newswire shared the Family Research Council’s article about how applause-worthy HR 6757 is.

Warriors, not to discredit FRC, but the ties to the U.S. Sec. of Education DeVos and her family are woven throughout this Christian based Council.

Let’s also raise THIS question:
If we’re going to start education savings for unborn children, when will the control of their education and/or taxation of them begin?

Breibart News also shared the news, although not quite as cheerful as the FRC’s.

Warriors, we’ve seen the huge controversy unborn children involve. Do we really need to throw education into the mix, too?! Are we so addicted to seeing DC play with fire (so to speak) in relation with our children that we’d actually be alright with HR 6575? I would hope not!

From TaxFoundation.org’s website, the news about HR 6757 is not only welcome, it ties to other D.C. Legislation which impacts not only taxes, but our freedom. The article I’ve included gives you a good basic understanding of the new Universal Savings Accounts.

The most disturbing part? The language of these types of accounts has the government in the driver’s seat and will ‘allow’ you to open savings accounts! If we’re putting the government in charge of our savings AND education, where will our freedoms stand?! 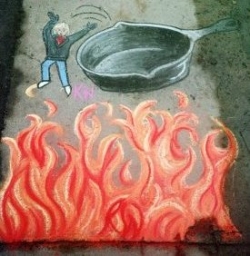 Look To The HR 6757 Committee Report:

Warriors, don’t simply stop at the language of HR 6757. Like the FY 2019 Appropriations Bills, The Family Savings Act has a Committee Report. If we’re going to better understand the strings this updated IRS Code will have, it will be here. While HR 6757 is a mere 98 pages, the Committee Report is well over 300 pages.

Title 3 of HR 6757 is where you’ll find the USAs, the Education Savings Accounts (ESAs) and more. However, remember, that in Congressional legislation, each part or title of a bill builds off the other titles. So, don’t simply skip to Title 3, look at Titles 1 and 2, first. Then, look beyond Title 3 for more strings.

I urge you to look on your own in the Committee Report for HR 6757. You’ll find that ‘education’ is embedded 120 times. You’ll read that these tax changes will begin AFTER Dec. 31, 2018 and extend to all the years beyond then. (*Note: you’ll see the initials JCT, this is short for Joint Committee on Taxation.)

Below are just a few of the CCSS Machine moves HR 6575 will bring to fruition:
a) play upon the DC led expansion of registered apprenticeships (will tie to CTE, Career Tech Education, STEM (Science, Technology, Engineering, and, Math), College and Career Readiness (CCR), and more.
b) assimilates homeschooling families and pays special attention to dual enrollment
c) Page 20: education loan repayments
d) Page 44: tax sheltered annuities and education
e) Page 71: tax advantaged savings and education for the disabled
(*Note: also on Page 71, you’ll see the clear definition of 529 College Savings Plans. They are the government’s, not yours. You’ll also see Coverdell Accounts. Look especially to the section called “Reasons for Change”. This will explain WHY Congress wants to change the tax codes.)
f) Page 73: The blow by blow account for expanded 529 programs
g) Page 75: More “Reasons for Change”. From my ESSA (Every Student Succeeds Act) research, this is a blatant grab on homeschoolers across America. Also on Page 75, direct ties to the National Apprenticeship Act. What 529 changes will occur (costs associated with apprenticeships, especially in higher education; home education expenses; and, qualified education loans spread out over your lifetime.)

Warriors, we know there have been Bills amending IRS tax codes before. Their purpose? To act as a back door to overtaking education. Back in 2017, I showed you how S 1193 and HR 2865 were proposed to amend taxes for P3s in education. These ‘sisters’ would allow for businesses to control education. (*Note: look for items #3 and 4 in the linked article above.)

If you’d like to see Forbes’ take on the Tax Cuts and Jobs Act and how it may impact our unborn children, read this.

Warriors, because there is no real school choice in ESSA and because our tax codes are shifting to reflect globalism, we know education has followed suit. How? Collectivism!

Lastly, my fellow Warriors, if you think of ESAs as a ‘pay for success’ scheme (which they are being spun this way for Native Americans), you’ll get a shock. We need this type of ‘wake up’ call.

Warriors, we knew the CCSS Machine’s grasp on education was HUGE. We knew ESSA and the mandates would level school choice (remember, those 529 Savings Programs and Vouchers were supposed to give more choice, but it’s an illusion we cannot afford to buy into).

We knew Congress overreached into education. But this? This isn’t so much about education. It’s about top-down control..of our money, how we spend it, where we save it.
It’s about limiting YOUR voice in your own life..and the lives of your children! This isn’t about academics, it’s about a boosted economy (part of why we have income and taxes).
It’s about being shackled for a lifetime of servitude. This IS not OUR AMERICA!

Will you stand up against this tyranny? Our government is stealing us blind. We MUST fight back. 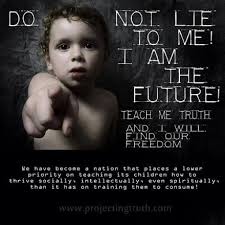