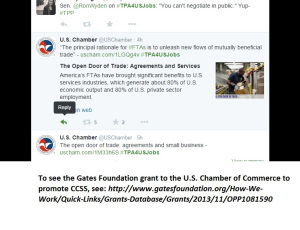 Not new news, I know, but, what is new was how the WIOA Waivers are being used behind our backs to force MORE workforce ESSA mandated pieces upon us.

Regardless of our age, our ‘school choice’.

Think of it this way,

Let me pause here to say that I know we need to work, but so does the CCSS Machine.
We know we used to have freedom to choose where we worked and how much education it took along the way, the CCSS Machine has changed the ‘game’ so that where you work and how long you are in school are locked in for life.

For the remainder of this article, I’ll share resources how this game changing move not only aligns with the United Nations’ plan for globally trained, barely educated citizens. It is also funneled into the US BY the UN and ‘do-good’ groups and/or powerful people who either know what they are doing OR are not aware of what they are supporting is harmful.

From NC, A ‘New’ Education Plan:

Warriors, just announced by the State Superintendent, Mark Johnson, NC will be the best place to learn/earn by 2030.

Before I tell you more of the #NC2030 Plan, in August 2018, I exposed the depth of Johnson’s lies about ending high stakes testing. It’s a shuck and jive move, for certain! Warriors, it plays right into this ‘new’ plan for workforce based aligned education. How? Here’s more from #NC2030:

From the announcement: “4-year-olds engaged in high-quality kindergarten readiness programs”

Also, from the Plan: “Students who, after graduation, are on track to their chosen, fulfilling career” 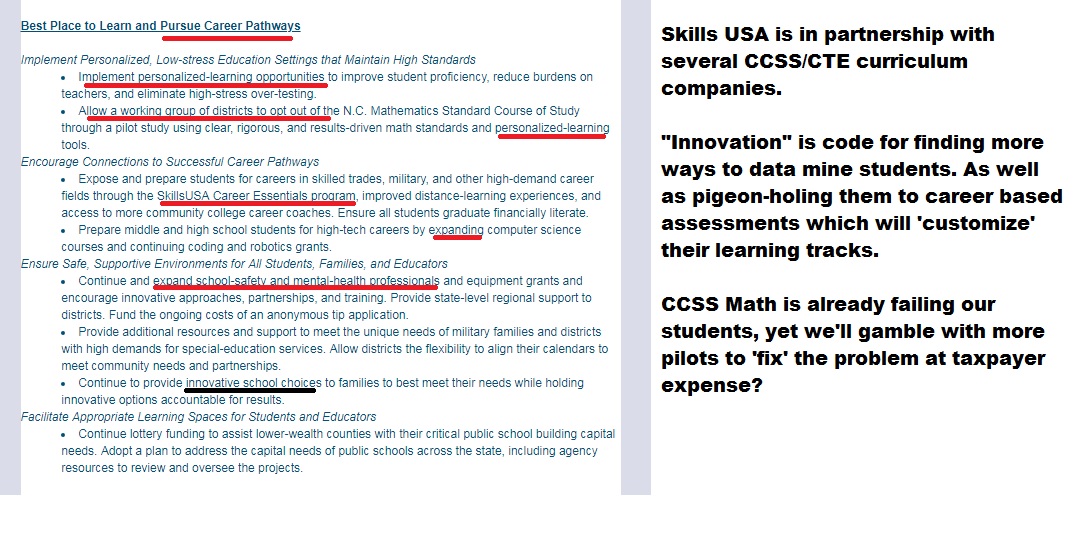 To see how Skills USA is a part of the CCSS Machine, that’s here. (Look for letter “E”)
To see NC’s obsession with CTE (Career Tech Education), look here. To see how cruel this is for our students, read this.

To see how the NC Teachers will fare in the NC 2030 Plan, read the rest of the Plan, here. Then contrast that with the supposedly NC created teacher pay tier plan. Teachers, I posed some hard-hitting questions which involve personalized learning as a front for career tracking. ICYMI, I’ve included it.

Warriors, do you remember the articles I’ve written about WorkKeys? That’s one of the pigeon-holing career assessments our students are being forced into taking. If they aren’t taking it in K-12th, they’ll find it in community colleges and job placement sites across the nation.
Why I bring this up is to remind you of the chilling point made by one of the small business owners from GA used in the ‘sales pitch’. Basically his words were ‘no WorkKeys, no certificate; no certificate, no job; No job, not sorry.’ (Entire article which can be applied to all States)
A related article will also tie to how the certificates are to rack and sort our students.

Warriors, add to that sales pitch, this from Iowa: A Senate bill which would punish you if you falsify your job application. While lying certainly isn’t acceptable, the one instance cited. Note, the man didn’t say he lied, he admitted he was underqualified.
See below: 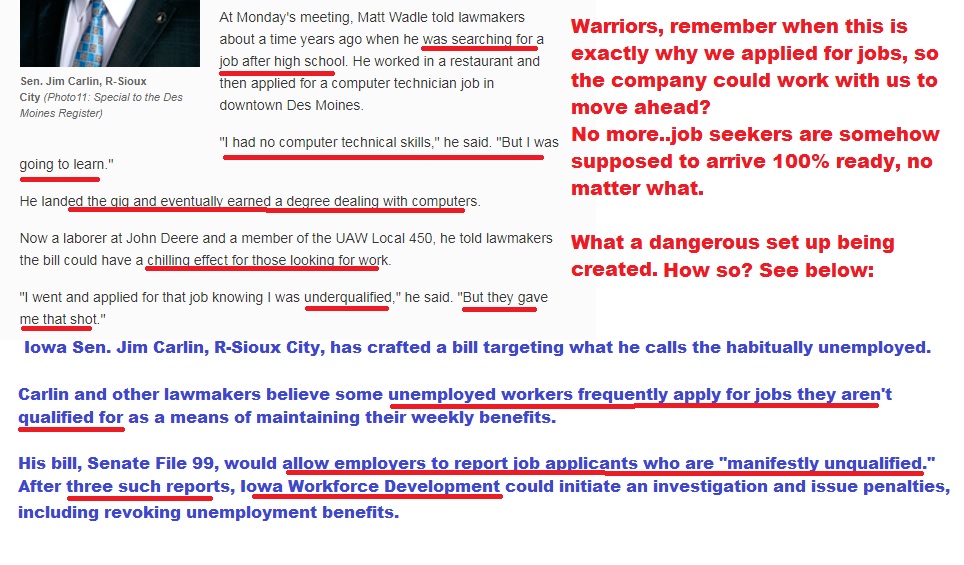 (Full article)
Warriors, in the article introducing the Iowa Senate File 99, other State legislators chimed in on curtailing underqualified citizens. Yes, the issue seems to be catching those abusing the system, but the overall message is also not to be missed, especially when it involves Workforce Development Boards and unions. Why? These are all tied to the CCSS Machine’s one-way-to-learn-for-one-way-to-earn. Data privacy was also listed as a huge concern. It should be, especially when Workforce and Education are united in the career pigeon-holing.

***Warriors, read the Senate File 99, the tone set is one of State/employer as a lording ogre and the worker as a minion. This is definitely a pattern we need to watch elsewhere. The global workforce has a similar tone.***

Also mentioned in the 2nd article (screenshot above) is a non-profit group called Project Iowa (PI). PI offers free career training for the underemployed and unemployed to bridge the gap so they may experience a life transformation. Helping fund PI is the United Way. United Way is in on the CCSS Machine’s global workforce train via the United Nations.

Another group, the AMOS (A Mid-Iowa Organizing Strategy) Initiative, helped get PI up and running. AMOS is largely a faith-based group, with one notable exception, the NAMI (National Alliance on Mental Ilness).
NAMI is also tied to the CCSS Machine in SEL (Social Emotional Learning). SEL is a big tool in the career pigeon-holing seen in education.
AMOS is an affiliate of Industrial Areas Foundation (IAF). IAF has roots in TX as a community organized group seeking to influence infrastructure. In the shift from academics to career based/skill based, where does infrastructure show up the most? Technology and data mining. Infrastructure in education also means policy making. IAF is tied to  Alliance Schools. The chief goal for Alliance Schools? Raised standardized test scores. If you’d like to see more information of how the TX based IAF has claimed victories in workforce alignment, go here.

Warriors, did you know that there’s a House of Representatives Bill (HR 860) which expands Social Security? One sponsor and well over 200 co-sponsors. How this ties into this article: part of the expansion will go to ‘lifelong’ low-income workers. If you study the global UN/CCSS Machine workforce language, ‘lifelong’ is also used in defining education. Who would this impact? Look below at this example from NC. The ‘low skill’ workers is where you should focus.: 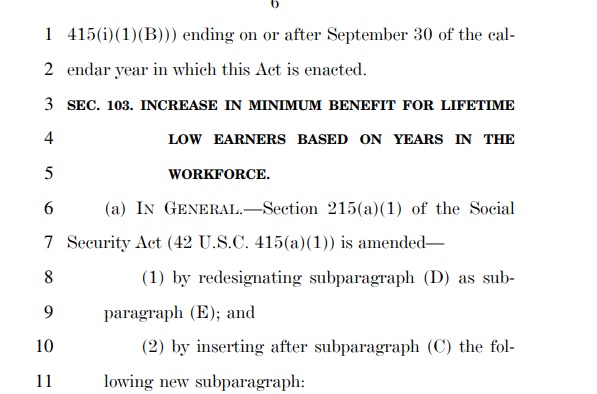 While In D.C. DeVos Does A Good Thing?

Warriors, you know, I have zero respect for our current Sec. of Education. Not that I respected any of the former leaders, but DeVos has proven repeatedly to undermine education (bad) all the while smiling and pointing to her donations (good). DeVos has proven she’s 100% on-board with the globalism shift from academics to workforce. She’s proven to be a STEM (Science, Technology, Engineering, and, Math) disciple. Which is a huge portion of the workforce/career based education America’s drowning in. Her latest ‘do-good’ moment was reported by Politico. (emphasis added is mine)

Warriors, if you’re curious how Mrs. DeVos ties to the SEL, here’s one where it involves the development of ‘moral’ assessments, and, one where her family literally profits off our student’s data rape. 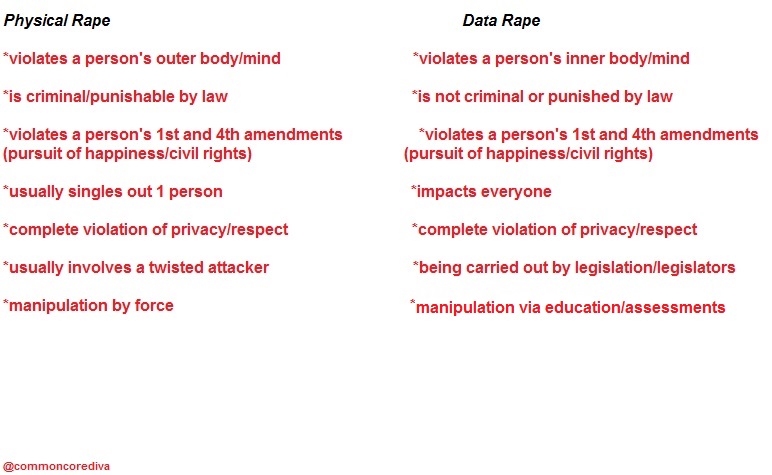 If you’d like to see the Kennedy Initiative, go here. Pay attention to the other international groups funding this for American students. To see the Children’s Scholarship Fund, go here.

UNAI, Humpty Dumpty, And You:
If you’d like to learn more about the (HDI) Humpty Dumpty Institute (you may be surprised to know that the “Chicken Soup for the Soul” group fully supports HDI.), visit here.

Not only does HDI tie to our U.S. Congress, they are in 100% unity with the United Nations as an UNAI (United Nations Academic Impact) group. (*Note: Don’t forget the Thurman Marshall College Fund is also a key part of the HDI, as well as tied to the UN.)

What does UNAI do in America? Each group or school identified as a UNAI has a special project assigned to them annually. The projects? To implement the SDGs (Sustainable Development Goals) of the UNESCO/UN creation. UNAI schools/groups are located all over the world, but the US has a huge concentration of UNAI ‘hubs’.

Warriors, you’ll be interested to know that some celebrities are spokespeople for HDI. HDI also has strong ties to the LDS (Latter Day Saints) faith. To see the Gates Foundation grants to the Thurman Good College Fund, go here.
To see the US federal agencies, corporations, and faith based groups HDI is in partnership with, visit here.

If you’d like to learn more about the UNAI groups, I’ve created a special Google Drive document for your use. (*Note: If you cannot access the Drive document, please let me know. I’ll be happy to send it to you. I’ll need a working email address to send it to.)

Share as you need to. It’s important to note that UNAI schools are an elite group and different from the UN/US Partner Schools.

Don’t get me wrong, ANY UN group infiltrating our schools is bad, it’s just the UNAI is even worse.

Where Love Is Indoctrination:

Warriors, if you are not familiar with who Jesse Lewis was, he was a victim of the Sandy Hook school shootings. Regardless of what you believe about the shootings, the bare facts are the CCSS Machine has used it as a back door to attack our 2nd Amendment; has skewed lesson plans and curriculum to promote a global agenda that tolerance will stop violence altogether, and more. Here on my blog, and elsewhere, many Warriors have proven these facts.

By the way, February is also consider CTE Month by our Vice President and many other groups. CTE ties to SEL, as well.

The Future For FL:

Gov. DeSantis has made plenty of news about “ending Common Core”, yet in the same breaths he plans to expand CTE and CCR (College/Career Readiness). The clues are all laid out in the language of his video captured speeches as well as the Executive Order issued.

Warriors, did you know DeSantis has had financial backing from the Koch Brothers as well as the DeVos family? With ties like this how can FL escape Common Core?

Recently (2/20/19) the Governor was a guest at the Economic Club of FL. Look at what DeSantis spoke of and how the Club is in full support:

To see how FL is really doing in CTE alignment, this 2013 document showed FL had added to the existing CTE Career Clusters (usually 16, but FL added ‘energy’ as the 17th) as well as had 3 different CTE standards streams and funding streams.

If anything DeSanits’s plan looks to streamline these 3 into one giant of an alignment system! (*Somewhat related, the fast-tracking career paths in high school for FL.) Meanwhile the State Education Committee is ramping up the voucher plans to expand the fictitious ‘school choice’.

Contrast all this with the 2018 Review. Other concerns about FL and any other State thinking it can end Common Core, are addressed here. (*Note: if you cannot access this Google Drive document, let me know.)

Warriors, for those of you in GA or who have family in GA, I’d say keep your eyes out on the new Governor’s CCSS Machine agenda there. He fully supports tax credits and vouchers (a pay-as-you-go, data mining disaster the agenda fully ‘hungers’ for), his ESSA mandated programs (increased literacy, especially for the littlest learners; increase mental health programs in schools) are very troubling. The price tag for Gov. Kemp’s mental health in education is set at $8.4 million. 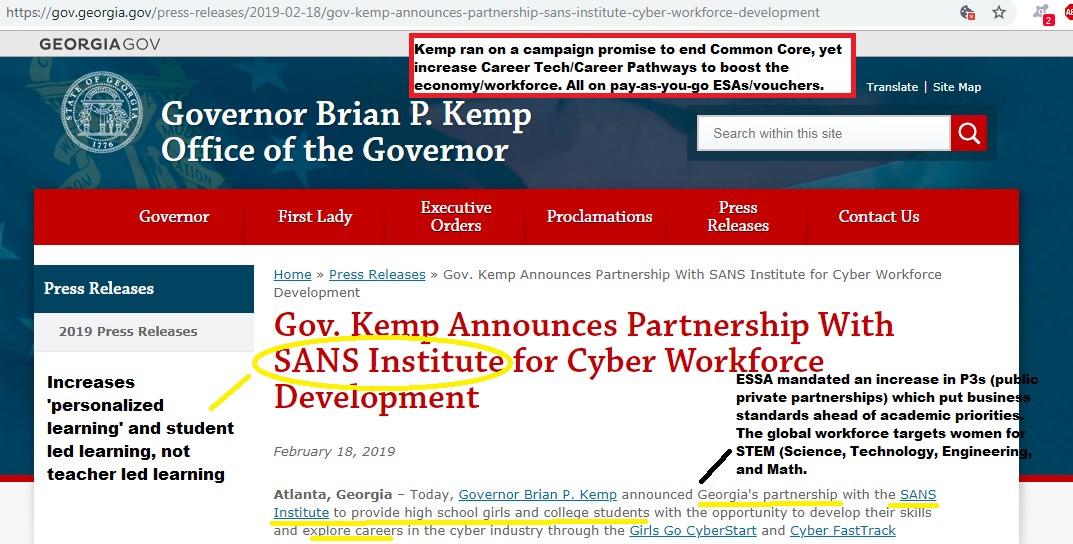 Warriors, I hope you can see good job all these leaders have done at being ‘bad’. Really, they are being deceptive. Isn’t that simply more of the same old worn out CCSS Machine rhetoric? 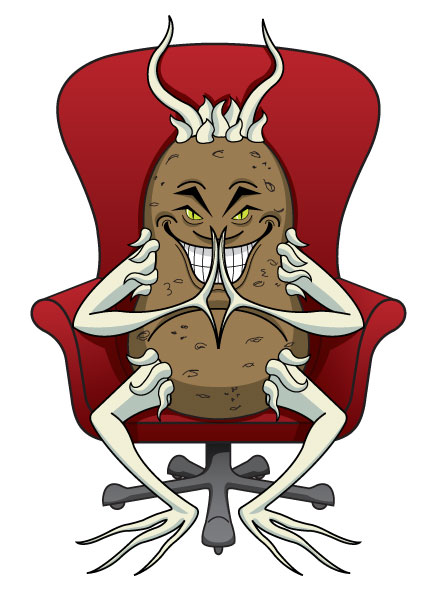